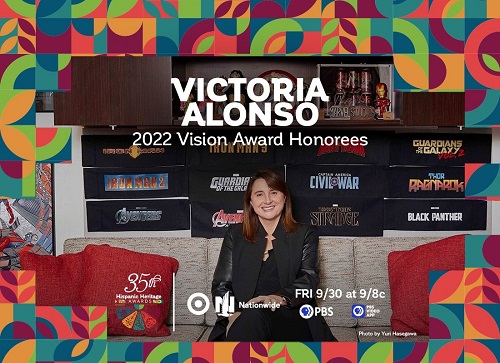 WASHINGTON, DC – August 04,  2022 – The Hispanic Heritage Foundation (HHF) announced today that Victoria Alonso, a powerful Latina presence in Hollywood and an executive producer of Marvel Studios’ biggest global film releases, will receive the 2022 Vision Award during the 35th Annual Hispanic Heritage Awards. The historic program, which was created by the White House to commemorate the establishment of Hispanic Heritage Month in America, is among the highest honors by Latinos for Latinos and supported by 40 national Hispanic-serving institutions. Presented by TARGET with Official Broadcast Sponsorship by Nationwide, the 35th Annual Hispanic Heritage Awards. will air Friday, September 30th on PBS stations and stream on pbs.org and the PBS Video app. Alonso will be honored alongside recently revealed Arts Honoree Los Lobos, and additional celebrated Latino artists and visionaries to be announced shortly.

“The Hispanic Heritage Foundation is thrilled to honor Victoria Alonso’s incredible career as an executive for Marvel Studios, but, moreover, as an actionable leader in ensuring the industry’s representation looks and sounds like what the world looks and sounds like in an authentic way,” said Jose Antonio Tijerino, president and CEO, HHF.  “Her elevated position as a Latina in Hollywood and corporate America cannot be overstated as our stories are told at a global level. It’s our turn to tell her story and celebrate our community’s accomplishment, cultural pride, and great promise.”

A native of Buenos Aires, Victoria Alonso moved to the U.S. on her own at the age of 19. She worked her way up through the film and TV industry, beginning as a PA before working at the VFX powerhouse Digital Domain. She served as VFX producer on a number of films, including Ridley Scott’s Kingdom of Heaven, Tim Burton’s Big Fish, Andrew Adamson’s Shrek and Marvel’s Iron Man. She won the Visual Effects Society (VES) Award for outstanding supporting visual effects/motion picture for Kingdom of Heaven, with two additional nominations shared for Iron Man.

Victoria joined Marvel as the company’s executive vice president of visual effects and post production, doubling as co-producer on Iron Man, a role she reprised on Iron Man 2, Thor and Captain America: The First Avenger. In 2011, she was upped to executive producer on the blockbuster hit The Avengers, a role she has maintained on all Marvel Studios’ releases since then, including Iron Man 3, Captain America: Civil War, Avengers: Age of Ultron, Ant-Man, Guardians of the Galaxy, Doctor Strange, Spider-Man: Homecoming, Thor: Ragnarok, Black Panther, Avengers: Infinity War,  Captain Marvel, Avengers: Endgame, Spider-Man: Far From Home, Black Widow, Spider-Man: No Way Home and, most recently, Doctor Strange in the Multiverse of Madness and Thor: Love and Thunder. During her tenure at the studio, Marvel films have amassed over $27 billion in global box office. In addition to executive producer, Alonso also serves as the studio’s President, Physical and Post Production, Visual Effects, and Animation Production.

Alonso has become an important voice in Hollywood as a producer, a Latina, and a senior female executive. She was honored with the Visionary Award at the 2021 Outfest Legacy Awards. In both 2019 and 2020, she was named one of People en Español Magazine’s top “Poderosa” Most Influential Hispanic Women. On multiple occasions, she has been named to Variety’s Power of Women L.A. Impact Report and The Hollywood Reporter’s Women in Entertainment Power 100.  With numerous other industry awards to her credit, 2019 also saw Alonso become the first woman ever to receive the key to La Plata, the capital city of Buenos Aires, where she was born.

About the Hispanic Heritage Foundation

The Hispanic Heritage Awards serve as a launch of HHF’s year-round mission focused on education, the workforce, and social impact through the lens of leadership and culture.  HHF is a 501(c)(3) nonprofit organization. For more information, visit www.hispanicheritage.org and follow the Hispanic Heritage Foundation on Instagram, Facebook, Twitter, and TikTok.