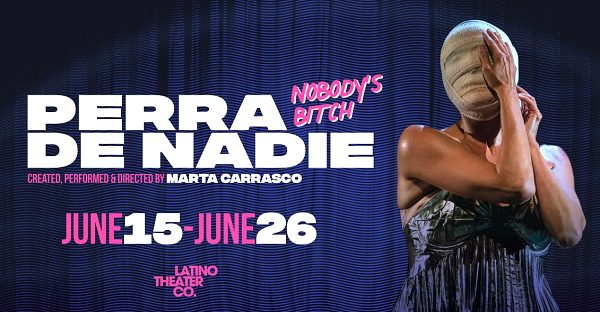 Last night, June 22, was a dance performance at the Los Angeles Theatre Center by highly acclaimed Spanish performance artist Marta Carrasco with her show Perra de Nadie, which translates as Nobody’s Bitch. Carrasco has returned to Los Angeles to present an 11-day run of her dance theatre work, Perra de Nadie, which opened on June 15 and runs through June 26 at the Latino Theatre Company on Spring Street in Downtown Los Angeles. In her show, Carrasco portrays many different female characters with accompanying musical selections which range from opera to pop, and she graces in and out of costumes that are laid out on the stage. Marta Carrasco’s highly original creations are characterized by an expressionist and grotesque aesthetic and are performed without dialogue. The topics she deals with illuminate the darkness and imperfection of humanity.

Though short in stature, Carrasco is powerful in spirit and like other great artists, her presence fills the room without her even trying. One cannot help but notice her eyes which express years of seeing and empathizing with the inner struggles and triumphs of people, particularly women. If one believes in reincarnation, Carrasco is an old soul who has experienced much throughout her many lifetimes. In her performance, she portrays vulnerability, madness, tenderness and fragility.

In an interview, Carrasco went on to explain the title of her performance piece: “Someone may have noticed, and rightly so, that the dog is one of the first domestic animals, which was very useful for hunting. But a bitch, if it belongs to no one, is good for nothing, or for anyone. Well, they do exist, yes! What’s more, they are essential in their uselessness… There, in the depths of each one of you, in that underworld of vulnerability, madness, tenderness and pure fragility, live Lili and her night watchmen.”

“My references are from painters, people from the street – even homeless, people without a roof,” she said. “Everything that is imperfect peaks my interest.” Referring to articles about her that say that she is inspired by the work of Martha Graham, Mary Wigman and Pina Bausch, “It does not bother me,” she continued. “It is an honor but it’s not true.”

What has been written that Carrasco does agree with is that her work can be characterized by an expressionist and grotesque aesthetic. When describing what type of artist she is, Carrasco considers herself a performance artist more than anything else. “I am a director in the way that I tell stories very directly and very emotionally so,” Carrasco, I felt was looking deep inside my soul. “I don’t know if I’m a dancer or not, an actress or not, the boss or not,” Prompting a good laugh for us all.

Asking an artist to talk about their work is as difficult as it is for them to describe what they do or to speak to the meaning of any specific piece of work. “It’s very hard to put words to images,” she said softly. “It (Perra de Nadie) is a dance theater piece with a little bit of text.” When asked if she wrote the text, Carrasco nodded in agreement but added “Every day I say something different. It is never the same.” She described how in the solos that she creates, everything changes. One performance is never like the next.

Marta Carrasco’s performance background includes performing for 5 years with Metros Dance Company led by Artistic Director and choreographer Ramón Oller, who was also one of Carrasco’s most influential teachers. She also worked with and learned from Àngels Margarit, the Artistic Director and choreographer of Mudances. When asked who most inspired her work, Carrasco answered via her translator Alba Morera. Carrasco lives in a small town near Barcelona called Cardedeu, has toured internationally including a few times in Los Angeles at the Latino Theatre Company. She has also presented her solo works BLANC D’OMBRA at the Ford Amphitheatre and AIGUARDENT at REDCAT.

In addition to her many works, Carrasco is the recipient of numerous awards including the Barcelona Theater Critics Award 1996-97, for Aiguardent and for Pesombra , and more than 20 awards or mentions, such as the Max Award (2003), the National Dance Award of the Generalitat de Catalunya (2005), the City of Barcelona Prize (2007) or the Serra d’Or Prize of the Theater Criticism (2007) for the best theater show, for J’arrive …!.

Perra de Nadie is created, directed and performed by Carrasco. Tickets for adults are $48; for students and seniors 65+, $22. For tickets: https://www.latinotheaterco.org/perradenadie 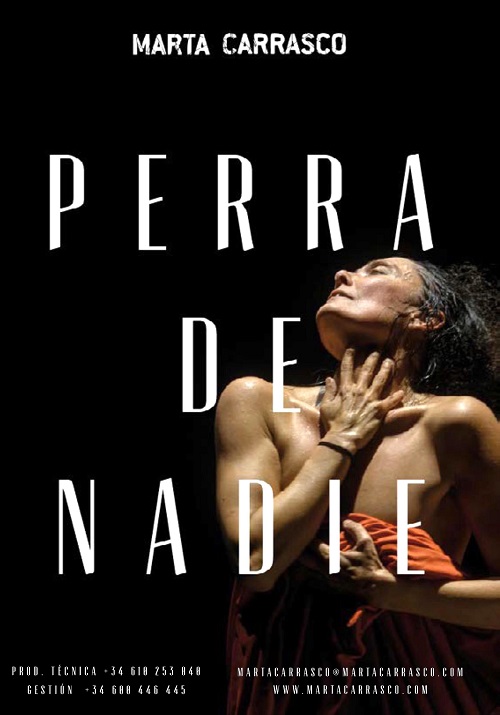