Los Angeles, CA (The Hollywood Times) 2/21/22 – Screening at the UCLA Hammer (Billy Wilder Theatre) in Westwood on Sunday, February 20 was Tongues United (1989), Marlon Riggs’s 1989 experimental documentary which sought in its author’s words to, “…shatter the nation’s brutalizing silence on matters of sexual and racial difference.” The film blends documentary footage with personal account and poetry in an attempt to depict the specificity of black gay identity. The “silence” referred to throughout the film is that of black gay men, who are unable to express themselves because of the prejudices of white and black heterosexual society, as well as the white gay society. Riggs’ highly poetic documentary screened at the UCLA Hammer as part of a month-long retrospective Pioneers of Queer Cinema, co-sponsored by the UCLA Film & Television Archive and Outfest Los Angeles.

Riggs brings awareness to the issues black gay men face They are excluded from gay communities because these communities are white-centered and fail to understand the intersecting identities of race and sexuality. Riggs experienced this in San Francisco, California within the Castro District in which he states, “I was immersed in vanilla” and witnessed the absence of the black gay image. 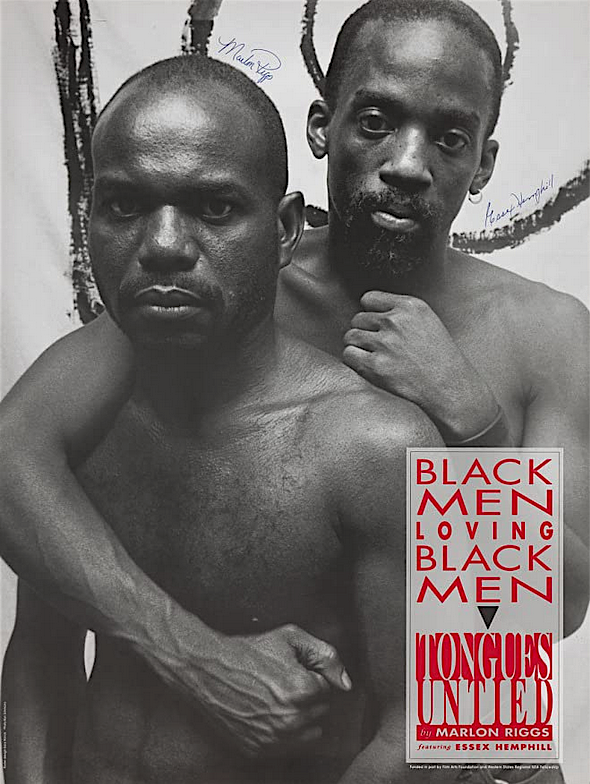 In addition, Riggs gives examples of media in which black men are hypersexualized for white pleasure and racistly portrayed black individuals. Black gay men are placed in a divide because their voices are excluded from these LGBTQIA+ communities, but their bodies are sexualized for white viewing pleasure. Furthermore, Black men are supposed to represent hyper-masculinity, and when black gay men associate with homosexuality, they are seen as being weak. With their gay identity, however, a Black man is expected to be both hyper-feminine and hyper-masculine. These are the stereotypes and stigmas that oppress Black gay men.

“Priorities. That’s what I want to know. Come the final throwdown what is he first, Black or gay?” This challenge is presented in Marlon Riggs’s 1989 documentary Tongues Untied in a scene of layered monologues representing straight Black men and their ideas about homosexuality. Tongues Untied actually troubles that binary question of Black or gay by exploring the complexities of Black masculinity. Intimate, expressionistic, lyrical, and confrontational, Tongues Untied is a lively conversation between and among Black people about sexuality and silence. Thirty years on, the film remains a powerful engagement with traditions of Black thought, and an urgent call to move Black queer experience from silence into language and action.

Tongues Untied mostly focuses on manhood, signaled by the opening incantation of “Brother to Brother.” While this decision narrows down the territory for the hour-long film, it also exposes the need for a fuller exploration of women and gender, particularly in its few scenes featuring transwomen and their solidarity with gay men. As a work of intra-racial dialogue, Tongues Untied directly confronts anti-gay attitudes within Black nationalist thought. By incorporating a variety of music, dance, poetry, and oratory, including the work of his friend Essex Hemphill, Tongues Untied can also be read as an extension of, and a critical response to, the Black Arts Movement. Hemphill and Riggs belong alongside other queer artists like Audre Lorde and June Jordan who participated in, argued with, and challenged the Black Arts Movement to revise its reactionary attitudes toward sexuality and gender. Jordan and Lorde believed in reaching across the barriers of gender and sexuality to try to make peace with their straight Black brothers and sisters.

In their experiences in white gay enclaves from The Castro to the Village, Black gay understood that the white gay community was not a place of refuge. Riggs speaks of growing up in Hephzibah, Georgia and being bused to Hephzibah High School where he was one of two Black students. He juxtaposes that childhood experience of segregation with the whiteness of gay San Francisco, where he also encountered racism. “In this great gay mecca, I was an Invisible Man … Here, as in Hephzibah, I was a nigger still.”

Seeing this film again in 2022, it is impossible to miss the connections to Pose, the television show set in the New York ballroom scene in the early 1990s. Tongues Untied includes footage of ballroom icons like Willi Ninja showing off the angular moves of voguing that captivated audiences around the world. In a recent New York Times feature from 2019, Pose star Billy Porter made a startling comment: “I grew up in Pittsburgh, Pennsylvania … August Wilson wrote about the neighborhoods I grew up in and there’s not one person in his 10-play cycle that is a gay black male.” Sadly, August Wilson isn’t remarkable in this regard. African American history is filled with novels, films, and plays that claim to represent the Black community, yet are absent of queer people, or only depict queer characters in the most pathological and derogatory ways. It is into that silence about Black queer life that Marlon Riggs spoke with the urgent and powerful Tongues Untied, raising his voice in a chorus of Black gay men.

In a key part of Tongues Untied, Riggs turns his critical eye toward the offensive portrayals of Black gay men in popular culture. This is the same Marlon Riggs who also made Ethnic Notions, the piercing 1987 documentary about the history of Blackface minstrelsy. Riggs includes excerpts from Spike Lee’s School Daze  and Eddie Murphy’s Delirious that highlight the ways straight Black artists often used homophobic tropes in their work. This is just another small example of queer silence in the name of Black solidarity, and an example of the competing allegiances that Riggs explores in Tongues Untied.

Tongues Untied is valuable as a document of Black queer history, particularly in the first decade of the HIV/AIDS epidemic that would eventually claim Riggs’s life. The documentary pushes for solidarity among Black people, even at the risk of having this conversation misused, misread, and misinterpreted by its broader audiences. Marlon Riggs took that same risk that Audre Lorde encouraged in her essay “The Transformation of Silence into Language and Action” in Sister Outsider (1984) when she said, “I have come to believe over and over again that what is most important to me must be spoken, made verbal and shared, even at the risk of having it bruised or misunderstood.”