Palm Springs, CA (The Hollywood Times) 11/24/20 – The icon of icons is returning to Palm Springs, California. Well, at least memorialized in the 26-foot-tall sculpture referred to as “Forever Marilyn,” by the well-known sculptor Seward Johnson who passed in March of 2020 at the age of 89. After Miss Monroe’s absence of several years from her temporary placement between 2012 to 2014, across from the old Starbucks at the corner of Palm Canyon Drive and Tahquitz Way, she will be making her way back to Palm Springs and her adoring fans—both local and visitors alike. The return is causing quite the heated wrangle between the Palm Springs Museum, the Palm Springs City Council, and the Palm Springs Bureau of Tourism, with some citizens’ chatter in the mix.

For some 10 months, she proudly towered in her famous pose, standing over a subway vent, laughing as her skirt blew up revealing her panties to the delight of many men and likely the jealousy of women, if not scoffingly so of the latter, from a blast of air during the filming of the movie directed by Billy Wilder in 1955, “The Seven Year Itch.” The image erupted great vexation in her husband at the time, ballplayer Joe DiMaggio, believing it was exhibitionist in nature. Well, all I have to say to the deceased Mr. DiMaggio (if I could): When you said “I do,” you were well aware you were marrying a sex goddess. You should have run with it regardless of the prudishness of the times. No, Joe, you could never have Marilyn all to yourself. To the heartbreak of the actress, they divorced 274 days after their nuptials.

Marilyn Monore’s new home will be on Palm Springs Museum Way where our beautiful and renowned Palm Springs Art Museum is located—to the stinging-dismay of the museum’s executive director and CEO Louis Grachos and his partner in crime, Steven H. Maloney, chair of the museum’s board of trustees. Mr. Grachos was quoted by The Desert Sun in a statement: “We serve over 100,000 school-age children that come to our museum every single year. What message does that send to our young people, our visitors, and community to present a statue that objectifies women, is sexually charged and disrespectful?” He told the Palm Springs City Council: “You come out of the museum and the first thing you’re going to see is a 26-foot-tall Marilyn Monroe with her entire backside and underwear exposed.” Mr. Maloney backs Louis Grachos’ concerns while following suit, expressing: “Displaying the statue in front or near the museum implies institutional approval and an unhealthy encouragement of risqué behavior of women.” Gee-whiz, I get the impression they’re not fans. Arthur Hamilton’s “Cry me a River” comes to mind. 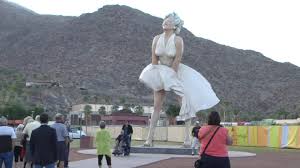 In all her monumental glory, the City Council has consented to host the statue for a three-year trial period. Seems to me more of a probation, as if Miss Monroe committed a crime. The only crime she committed to my knowledge was giving joy and magic to her fans during her lifetime, and long after her untimely death. Thankfully, Marilyn Monroes will continue to live on well after those that protest her return are gone.

Hey fellows, we’re talking about the beloved Miss Monroe who did spend a considerable amount of time in Palm Springs with The Rat Pack as she also had a home on Rose Avenue. I more than anyone want to protect the sensibilities of children, but I strongly doubt seeing her panties is going to scar any children for the moment or a lifetime. I’m quite sure with some explanation of Marilyn Monroe’s prominence in the film industry and her personal history will suffice. We’re not living in the Stone Age. The children you’re trying to protect no doubt have seen far more risqué attire in movies and television—certainly, teenage high school characters wearing skimpy clothing and engaging in sex, and the same can be said for some cartoons. It’s this writer’s opinion that perhaps Mr. Grachos and Mr. Maloney need to untangle their panties or put on new ones. Give a girl a break!

Mr. Chumbley’s opinions are not necessarily those of the employees of THEHOLLYWOODTIMES.TODAY.