Advertisement
Home #Hwoodtimes Marilyn Monroe Was So Much More Than A Blonde Bombshell—More Than Met...
Facebook
Twitter
Pinterest
ReddIt
Email
By: James Randall Chumbley
Palm Springs, CA (The Hollywood Times) 11/28/20 – The controversy continues concerning our dear Miss Monroe’s return to Palm Springs, California, memorialized in the American artist, Seward Johnson’s 26-foot-tall Marilyn Monroe sculpture, “Forever Marilyn.” But, instead of Marilyn, born Norma Jeane Mortenson, causing the ruckus, it’s this writer. And, it’s this writer that values his sleep, but I find myself typing away at my computer at 2 a.m. when I should be in bed dreaming of sugar plums and hot men dressed (shirtless, of course) in Santa suits. But no one is going to trash-talk my Marilyn.
In the spirit of Christmas and all that, I’m going to do my best to be “nice” and not too “naughty” when it comes to raking some people over the coals, because I really, really want that new black-on-black V6 Ghibli Maserati Hybrid instead of a bundle of switches under the tree, and coal in my stocking. Still, I just can’t let go of the ridiculous and ignominious insults—enough to keep me up at night—by The Palm Springs Museum’s executive director and CEO Louis Grachos and Steven H. Maloney, chair of the museum’s board of trustees given in statements to The Desert Sun and the Palm Springs City Council! Boiling their comments down, basically egregiously and shamefully so, demeaning Miss Monroe and her image, recreated in the “Forever Marilyn” sculpture in her famous pose, standing over a subway vent, resulting in the skirt of her dress blowing up from a blast of air revealing her panties during the filming of the movie directed by Billy Wilder in 1955, “The Seven Year Itch:” Objectifies women, by its sexually charged pose and disrespectful and unhealthy, encouraging of risqué behavior of women. And their lame concern that the sight of Miss Monroe’s rear end and panties will be scarring the thousands of young children the museum hosts every year. All, making me want to run to the nearest toilet to flush Grachos and Maloney and their shitty statements in the sewage system of Palm Springs where they belong. Was that too “naughty?” 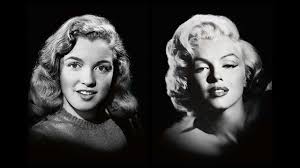 We’re talking about a self-made woman who came from nothing. Norma Jeana spent the major part of her childhood in foster homes and an orphanage in Los Angeles. In spite of it, she became a top-billed actress in the hard-knocks-town of Los Angeles! Again, she continues to live on long after her passing and will do so long after any of us are dust. In her short life of 36 years, Miss Monroe did more than most for the film industry and the women that scoff her—past and present. That pisses this writer off and makes me see red. And not the red of a Santa suit. I’ll be damned before I let the Palm Springs Museum’s Louis Grachos and Steven Maloney disgrace her good name! My Marilyn—indeed a sex goddess—was a talented, bright, sensitive, soft-spoken, kind, gentle-souled, passionate, misunderstood, and a loving human being that refused to be controlled by men and society’s obsessive and domineering moralities of her time (and apparently, some of present-day). She was (and still is) admired and adored by millions around the world. During WWII—the deadliest conflict in human history—as many women, Miss Monroe did factory work for the war efforts in the battle against Adolf Hitler’s Germany and his obsession for the domination of Europe by the superiority of a “pure” German race by the genocide to those he saw as unworthy of life: the Jewish race, including the mentally ill, the handicapped, and those he saw as sexually deviant. Later, she performed with Bob Hope for the troops during the Korean War.
Two of my close women friends contacted me after THEHOLLYWOODTIMES.TODAY published (11/25/2020) my first article on the matter. They believe (bang my head against the wall), as Grachos and Maloney, that the sculpture objectifies women. I had to take pause having been on-the-town with one on several occasions, her habit of wearing tight-fitting, hip-hugging pants and blouses showing much of her ample cleavage. The other, having pretty much the same taste and style in clothing as she loves wearing bikinis—no more than shoelaces and small sample swatches of fabric—on the beach below her Laguna Beach home—that leaves little—if nothing—to the imagination. Plus, she dresses her adorable five-year-old twin girls in bikinis as well. The question: In all actuality, what’s the freaking difference between panties and bikini bottoms? Are those examples not the perfect template of the proverbial idiom: The pot calling the kettle black?

My response, although offered with reason and respect, wasn’t that well-taken as I reminded my friends of how much they enjoy showing off their beautiful, jaw-dropping physiques. Personally, I believe women should be proud of their bodies while basking in their sexuality. Women in general—throughout history—have been objectified and controlled by men. And now, this BS over Miss Monroe’s panties in 2020, and in all places—Palm Springs? I did suggest since they were being so prudish about “Forever Marilyn,” soon-to-be-displayed on Palm Springs Museum Way near or at the Palm Springs Art Museum, that perhaps they should think about how they would like to have lived in the days where women were bound by laws of what they couldn’t wear in public. Especially at the beach, particularly in the 1920s, the one-piece unitard—neck to knees—bodysuits. In years before, the attire was much more heavily layered and burdensome. 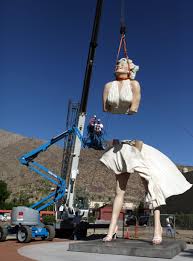 I followed suit on the same course—asking: How they would feel if they were obligated to wear the seriously modest clothing of neck-to-feet cloaks and the Hijab headdress of Muslim women only allowing their eyes to be seen? At that, they sang a different tune, including gasps and outrage of men and religion telling them what they can and can’t wear. Goodness me, I have to wonder if they both have crossed me off their yearly, Christmas party invite? They both give great parties! Oh, well. My friends should be thankful, like other women, for the role Marlyn Monroe help play in changing attitudes toward women’s sexuality—freeing them of restraints put on them by men, which is exactly what that pose captured and immortalized in the “Forever Marilyn” sculpture represents.
Marilyn Monroe wasn’t a “dumb blonde,” and possessed so much more than what met the eye. She fought to break the chains that wrapped her by men—studio heads—being typecast and underpaid. A smart woman that founded her own film production company in 1954, so she could make her own rules. Tragically, much of what she fought, surely and sorely troubled her deeply living in a man’s world whose male inhabitants wanted to control and own Marilyn, as they did her remarkable beauty. Now, Grachos and Maloney are doing the same concerning her legacy, and this writer won’t stand for it! I can only ponder: The great roles Miss Monroe would have performed on that big magical screen—if she wasn’t pushed over that threshold between life and death. 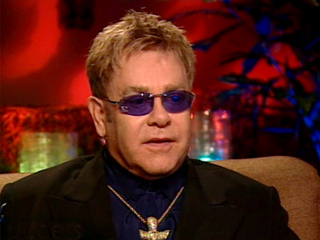 The only ones that are going to be scarred, unless this writer can control himself and get a good night’s sleep, are two toilet, wet-headed men at the Palm Springs Museum. So, back the blankety-blank off Miss Monroe! On a final note to Grachos, Maloney, my two female friends, and anyone else that has an issue with Marilyn’s panties: Elton John never wrote a song about any of you, or did Seward Johnson immortalized you in a sculpture. Goodness, I hope I didn’t screw-up finding that new black-on-black V6 Ghibli Maserati Hybrid in my driveway Christmas morning. Anyway… Merry Christmas, my beloved Marilyn.
Mr. Chumbley’s opinions are not necessarily those of the employees of THEHOLLYWOODTIMES.TODAY.