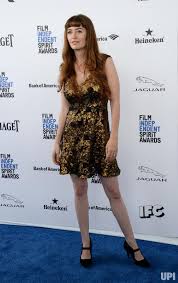 New York — Moms-in-Film, an organization founded to energize the careers of mothers in film and television by providing community, funding and advocacy, celebrated its one-year anniversary at The Players on April 18. The bi-coastal organization chose to honor filmmaker and mother Marielle Heller, whose film DIARY OF A TEENAGE GIRL ignited audiences and critics alike at Sundance and Berlin, and whose upcoming film CAN YOU EVER FORGIVE ME? stars Melissa McCarthy.

Accepting the award, Heller commented, “”Before I had a kid, I thought I’d have to keep those parts of my life separate. I didn’t think, as a mother, they’d take me seriously as a filmmaker. I had my child 5 weeks before my film premiere and there was no separation, he was there, breastfeeding at my premiere party. I realized how much I didn’t want those things separated… It does feel like our personal feminist fight right now.”

Presenting Heller with the award, Moms-in-Film founder Mathilde Dratwa commented, “Mari pulled off the birth of a film and the birth of a child in crazy syncopation, and more importantly, she did not hide it. That is revolutionary.” The award itself is a concrete sculpture titled MOTHER AND CHILD by Barbara Lubliner whose work, often inspired by her experience giving birth and mothering, can be seen on the Brooklyn Museum Feminist Art Base.

PETERSEN AUTOMOTIVE MUSEUM CELEBRATES THE 90TH ANNIVERSARY OF THE ICONIC 1932 FORD WITH A NEW NATIONAL HOLIDAY, EXHIBIT AND A STAR-STUDDED GALA