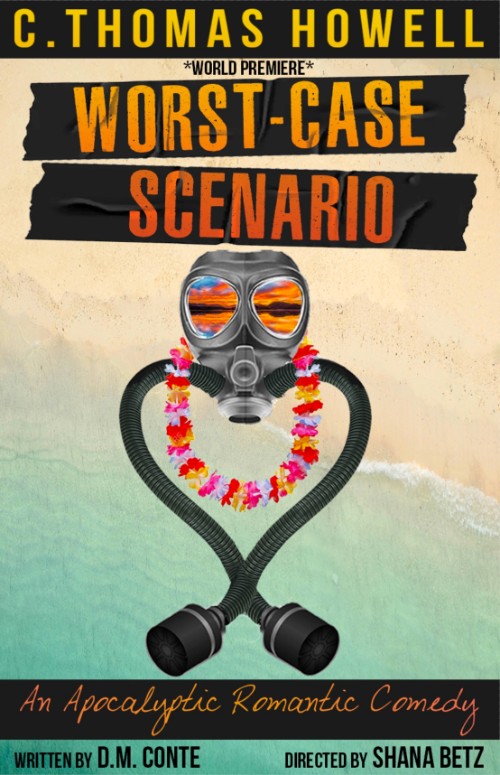 LOS ANGELES (Feb. 20, 2020) — What if you met the person you’ve been waiting for your whole life, just as a nuclear apocalypse was heading your way? Worlds collide in a tiki bar at the edge of Kauai when an aimless Silicon Valley dropout meets the bar’s brassy owner, who has a plan for all worst-case scenarios, except one… finding love. Starring C. Thomas Howell, the world premiere of Worst-Case Scenario was inspired by the real-life event which took place on the morning of January 13th, 2018 when an incoming missile alert was issued for the island of Kauai which advised residents to “seek shelter… this is not a drill.” Writer/Producer D.M. Conte helms the project, with Shana Betz (Free Ride) directing for a March 20 opening, with performances continuing through April 11 at the Hudson Comedy Central Backstage Theatre. Preview performances take place March 13-15.

Set in the wee hours of the morning, “Ethan” (C. Thomas Howell, The Outsiders, E.T.) sits in a tiki bar with only his backpack and a secret. He has wandered the island of Kauai looking for a way out of his dilemma… that is until “Staci” (Jacy King, The Affair, Glee), the bar’s intrepid owner, walks in. Sparks fly as they dance around their attraction for each other… after all, it’s Christmas time on an island paradise… What could possibly go wrong? An incoming missile alert propels them both into a bunker to face their darkest fears. Staci reveals a secret of her own, threatening to explode their budding romance before it even takes off. What they uncover about themselves that will determine if they have it in them to really live, should they open the hatch to second chances.

The cast also includes “Kali” (Toni Torres, Tim Robbins’ The Actors’ Gang Embedded which also ran Off-Broadway, and in London, TV: Goliath, How To Get Away With Murder, Lopez) as the salty bartender and “Rick” (Pierre Adeli, acting member with The Actors’ Gang in over thirty productions including 1984, A Midsummer’s Night Dream, The Rivals) as the island barfly.

C. Thomas Howell (Ethan) has been acting in front of the camera since he was six years old. He came to fame originating the role of “Ponyboy” in Francis Ford Coppola’s classic film The Outsiders as well as appearing in Steven Spielberg’s E.T. The Extra-Terrestrial. Most recently, he has starred in several popular television series such as Southland, Ray Donovan, Criminal Minds and SEAL Team. With over 200 acting credits, as well as numerous directing and writing credits, Howell is excited to be making his stage debut in this role.

D.M.Conte (playwright/producer) Darlene brings decades of experience across multiple disciplines as the writer/producer of Worst-Case Scenario. She is currently shopping a half-hour comedy series, 150 Jobs, as well as the feature Continental Divide. Additionally, she is developing the thriller The Gateway as well as the coming of age comedy, Cornhole. She will produce her next play, SHAME, later this year. She has also written for Cultural Weekly as well as WriteMovies.com. Her producer credits include Searching for Jimi, and Fresh News. She is a proud member of The Chimaera Project.

Shana Betz (director) Shana is an award-winning independent director whose fearless, character-driven approach is bolstered by life experience and a passion for storytelling. Best known for her 2015 film Free Ride, starring Anna Paquin (HBO), as well as her work in the award-winning anthology GIRLS! GIRLS! GIRLS! Her latest feature, a thriller starring Richard Roundtree is set to release in 2020. Betz is now focusing on content creation for television with her series, The Miller Line.

Betz is a former Film Independent Directing Fellow and the Co-Founding President of The Chimaera Project, a non-profit dedicated to empowering female filmmakers to fearlessly create, inspire and lead. As a member of Tim Robbins’ The Actors’ Gang Theater, Betz began her career as an actress working in theater, television, and film while transitioning into the writing, producing and directing chair. In 2016, Betz produced Cherry Boom Boom, a 25-person dance show, at the world-famous Tropicana in Las Vegas, Nevada. Betz’s childhood experiences growing up on welfare as the child of a drug runner in Akron, Ohio, have led to her deep affinity for salt-of-the-earth characters and stories that celebrate humanity in its truest form, however gritty that may be.

Worst-Case Scenario runs March 20 through April 11 with performances on Fridays and Saturdays at 8 p.m., and Sundays at 3 p.m. Preview performances take place on March 13-15. Tickets are $42. The Hudson Backstage Theatre is located at 6539 Santa Monica Blvd., Los Angeles, CA 90038. For reservations and information, please visit www.worstcasescenariotheplay.com or www.onstage411.com