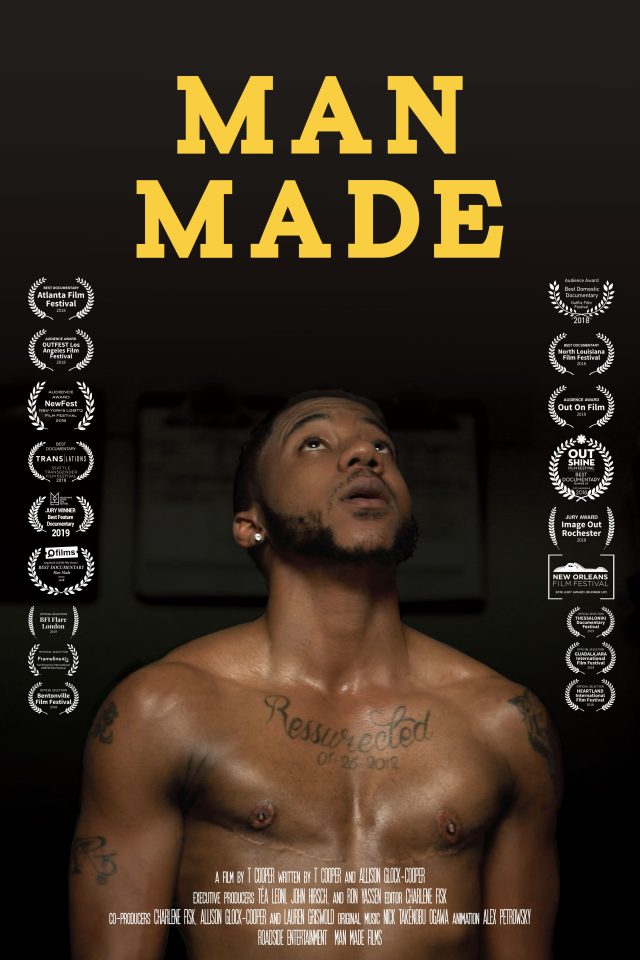 “Man Made is the rare crowd pleaser with genuine cultural value, and the largest muscle on display is the film’s enormous heart…An intimate, devastating, and ultimately triumphant little movie.”

Seattle, WA (The Hollywood Times) 11/6/2019 – “An amazing journey of transformation from who you were to who you are meant to be!” – Patrick Donovan

Featuring the stories of four people:

The film is an intimate and fascinating look at a less visible aspect of trans culture and identity, and trans director T Cooper is an acclaimed Hollywood writer/producer (Netflix’s The Get Down, The Blacklist), journalist, novelist, and activist. Actress Téa Leoni is the film’s executive producer, and has a powerful story of why she is part of the team behind the film (also see below).

Out Magazine said, “Man Made is the rare crowd pleaser with genuine cultural value, and the largest muscle on display is the film’s enormous heart… An intimate, devastating, and ultimately triumphant movie.”

MAN MADE follows the extraordinary lives of four transgender men as they prepare to compete at TransFitCon, the only all trans-bodybuilding competition in the world – held in Atlanta, GA. What precedes this triumphant moment are a set of personal and diverse journeys taken on the path to self-identity and empowerment: MAN MADE intertwines the nuances of manhood; the drive for social justice; and the competitive desire to forge our own paths and be our personal best.

MAN MADE takes us into the heart of transgender male (FTM) culture, revealing unexpected truths about gender, masculinity, humanity and love. It’s a character-driven, intimate, and riveting verité-style competition film, but also a unique social justice narrative. It speaks to the ways in which we all choose to define and reshape ourselves, both figuratively and literally.

Rese is a young father struggling with periods of homelessness; Dominic seeks out his family of origin, confronting an alternate history for himself; Kennie admits to himself and his loved ones who he is for the first time in his life; and Mason, a loving husband who struggles with mental illness, works daily to be the man he’s always wanted to be-on both the inside and out. We follow these subjects’ emotional and physical journeys as they navigate lives as the men they are, despite very real risks inherent in the current social and political climate. For the men of MAN MADE, it’s not about winning-it’s about being seen.

T Cooper is an award-winning filmmaker, best-selling novelist, journalist, and television writer-producer. Man Made is his feature directorial debut. His first film, The Beaufort Diaries, is an animated short starring David Duchovny, which Cooper adapted from his own graphic novella of the same name; the film premiered at Tribeca and SXSW. Cooper is also the author of nine books, including two bestselling novels. His television writing credits include The Get Down (Netflix), Copper (BBC America), and he is currently a writer/producer on The Blacklist (NBC). Cooper’s journalism and short fiction have appeared in a variety of publications, including The New Yorker, The New York Times, Harper’s, Mother Jones, Esquire, O:The Oprah Magazine, CNN, Out, The Advocate, The Guardian, and The Believer, as well as on Public Radio, and in many other venues in both the U.S. and abroad. Cooper is a professor of English and Creative Writing at Emory University, and lives in New York City and Atlanta with his family

Directed with an intimate and authentic vision by trans-filmmaker T Cooper – an acclaimed novelist, television writer, journalist and LGBT activist. Said Cooper, “I believe that this film is more vital than ever. Even though I am not a bodybuilder, I know what it means to envision and then actually take steps to build the body-and life-that you want. So in some ways, this is mystery. But it is also the story of anybody who has done what it takes to become the person s/he is meant to be.”

Executive produced by Téa Leoni, who said, “Man Made is striking, and simply feels like nothing I’ve seen in storytelling around transgender lives, either documentary or narrative. Simply put: you see this film, and it changes you.”

This is a story about people. Human people. It chronicles the lives of four people that are comfortable with who they are and the struggles they’ve overcome.

“Trans FitCon is the only all-transgender bodybuilding competition in the world.”

“It’s open to anybody who self-identifies as a transgender male regardless of physical presentation.”

“Twelve men from around the country are preparing to compete at this year’s Trans FitCon.”

This is the story of four of these men.

He’s a rapper and a good one at that. As a female, “Nicole”, was one in a few. Now, as a male, he’s just blends in with the rest of them. Thea is his female partner and it’s time for a double mastectomy with nipple grafts. He was adopted by Dwayne and Kathy at age one. As a child, he would love to wear boys clothes and always smile. His parents are worried and he’s anxious, nervous and scared.

The producer was even emotional seeing the reveal.

Bodybuilding helped him transition and before he got on testosterone. This gave him the confidence that he lacked. He’s one of the few transgender men who participate in mainstream bodybuilding competitions.

Even though he took a urine test and there were no issues with him being transgender, he recently learned that he has been barred from a local bodybuilding competition because he ‘is’ transgender. Anne, his wife, is very supportive as is his mother-in-law, Jeanette. So it’s off to Columbus for a competition that he can attend.

He did not place in last year’s Tran FitCon.

A few months after last year’s TFC, he became homeless. All he thought of was where his next meal was going to come from. His mom hasn’t accepted him since he came out as trans. He was taken to the family pastor, had holy water put on his forehead and for 30 min, the demon was beat out of him.

Get back to being normal, have a family… as a homeless person, there are no shelters for trans people because the caretakers of the shelters don’t know where to put trans people: Female or Male side. So, they gave him a granola bar and orange and wished him the best of luck. Rese is picking up his son, De’Montea. He calls Rese, Mommy. They meet at McDonalds.

This competition for Kennie gives him a sense of belonging which is something he hasn’t felt in a long time. Kennie also did not place in last year’s Trans FitCon. It’s the first time that he’s used the name, Kennie. He works at the University of Arkansas fitness center but they still know him as her original name: Arian (pronouced Aree-ahn). He was on only Testosterone and people were amazed at what he’s done all on his own.

He’s ready for hormone treatment. One of Kennie’s 9 year clients, an older lady, supports him and she wants him to be happy. In Conway, there’s a lot of ignorance. He was beaten up before because how he supposedly looked with his girlfriend. Jess, Kennie’s friend is fearful that it may get worse as he transitions. His girlfriend is worried that when the testosterone takes affect and he grows a beard, she won’t be attracted to him anymore.

This film introduced me to something that I never knew about. These men, these wonderful transgendered men’s journeys were incredible to see. What a life that these men have. The struggles and the mountains they’ve had to climb. In the end, they revealed who they really are, inside because outwardly, it didn’t matter. What matters is that they were true to themselves and strove to achieve the goals they wanted to achieve.