Los Angeles, CA (The Hollywood Times) 5/11/18 – ACT of Connecticut (A Contemporary Theatre) is kicking off its inaugural season with the smash hit musical “Mamma Mia!” premiering on Thursday, June 7th, 2018.  The production features ABBA’s greatest hits and will star professional talent from Broadway and New York as well as Fairfield County.

More than 60 million people worldwide have fallen in love with “Mamma Mia!”

The beloved musical unfolds on a Greek island paradise where a young woman’s quest to identify her father on the eve of her wedding brings three men from her mother’s past back to the place they last visited 20 years ago.

During the show’s 14-year run, the Broadway blockbuster became an international phenomenon.  ACT of CT is bringing this enchanting story to life in its new $1.8 million-renovated, state of the art theater.

“To revisit ‘Mamma Mia!’ after all these years is quite a thrill,” says artistic director Daniel C. Levine, who was part of the original company in 2000.  “It’s one of those feel-good shows that just gets the audience leaping to their feet by curtain call.  I’ve been involved with ‘Mamma Mia!’ for many years, and the cast we have assembled at ACT of CT is the best yet!”

ACT of CT’s “Mamma Mia!” will feature Broadway talent Juliet Lambert Pratt as “Donna,” Jodi Stevens as “Tanya,” Sheri Sanders as “Rosie,” Michael Hunsaker as “Sam,” Victor Hernandez as “Harry,” and Craig Ramsay as “Bill.” Pratt and Stevens are local residents from Ridgefield and Weston, respectively.  Like Levine, Ramsay was also a member of the original production’s cast.

“I’m thrilled to be part of ACT of CT’s first show, especially ‘Mamma Mia!’” says Craig Ramsay, now a Hollywood celebrity trainer.  “It’s exciting that Ridgefield and the surrounding region can now experience Broadway-caliber theater without having to go to NYC!  ‘Mamma Mia!’ was a life-changing experience for me back in 2000 and I can’t wait for everyone to see what ACT of CT has up its sleeves.” 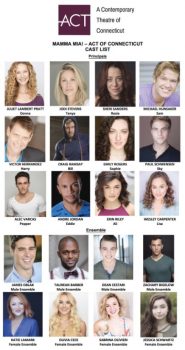 The “Mamma Mia!” performance schedule includes evening shows from Thursday through Sunday and additional matinee times on the weekend.  Tickets are currently available online for the limited-engagement run of the show.  The final performance will take place on Sunday, June 24th, 2018.