West LA, CA (The Hollywood Times) 7/17/21 – Just opening at the Laemelle Royal Theater in West L.A. and two other Laemelle theatres in town is a new French film Mama Weed (La Daronne or “The Godmother,” 2020, which stars the accomplished Isabelle Huppert as Patience Portefeux, a French-Arabic translator for the Paris police anti-narcotics unit who stumbled upon an opportunity running a hashish selling business to earn much-needed income and make ends meet. The film is directed by Jean-Paul Salomé with a script he wrote with Antoine Salomé, adapting a popular novel by Hannelore Cayre. For this film, Isabelle Huppert spent a few months learning Arabic. Patience has been working for the Paris police in the anti-narcotics unit and we soon learn that she has been a widow for 20 years and has two grown daughters living with her in her apartment on the outskirts of Paris. She is behind on rent in her apartment and also two months behind on payments to the expensive senior extended-care facility where her ailing mother (played by Liliane Rovère) lives. It seems that Patience’s mother was married to a French Algerian who left Algeria in 1957 and the family lost everything. Later we discover that Patience herself was widowed after her husband who died in Oman; he always had plenty of money but since his death, Patience works hard to support herself and her two daughters. Because the backgrounds of these characters seem a bit shady, it prepares us for negotiating the direction that Isabella Huppert’s character takes in the film. 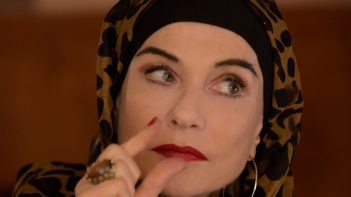 When Patience finds out that one of the young men she has been tracking for the police from intercepted phone hacks is the son of a nurse who cares for Patience’s aged mom, Patience does some mistranslating and redacting to make sure the fellow is not swept up in the dragnet intended to capture a one-and-half ton shipment of hashish from Morocco. Eventually Afid (Yasin Houicha) gets caught by the police, but not before Patience has managed to cleverly inherit custody of the massive hashish shipment. With the help of a drug-sniffing adopted German Shepherd named DNA and some Muslim-friendly disguises, Patience creates a new persona, “La daronne,” arranging to foist her wares on a couple of low-level guys nicknamed Scotch and Cocoa Puffs. Soon she is making plenty of money on the hash sales but she bristles at the injustice of France’s war on drugs. 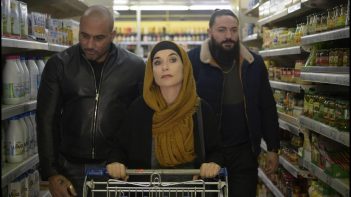 The film injects a refreshing dose of femininity into the male-dominated milieu of the classic French film known as the policier, both in the form of Huppert’s fiercely independent character and that of the exquisite Rovère (seen in the acclaimed Netflix comedy series Call My Agent!), who attributes her daughter’s name to the fact that she carried her for 10 months. Liliane Rovère plays the ailing, Yiddish-speaking mother at the extended-care home where Patience is several months behind in paying for her lodging. Also contributing to all that female empowerment is Vietnamese actress Jade Nadja Nguyen as an enigmatic Chinese neighbor, Madame Fo, who ultimately gives Patience some valuable tips pertaining to the fine art of money laundering. Meanwhile there is the love interest on the part of Philippe (played by Hippolyte Girardot), who grows more besotted with Patience even as he becomes more obsessed with catching “Mama Weed.” Patience’s ingenuity sees her leaving locker keys for Scotch and Cocoa Puffs in cookie packages in the local market; a big dress shop is the scene of a narrow, high-speed escape for Patience as Philippe and the squad move in. 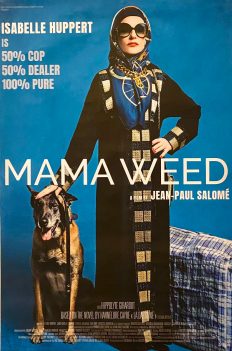 The trailer for Mama Weed drew some criticism on social media because Huppert’s character, as part of her Breaking Bad-style transformation, takes to wearing a headscarf and pretends to be of Arab descent. Still, it’s in keeping with the spirit of The Godmother, which highlights the race and class bias in French drug cases: In the original book, her character is able to fool police investigators because they don’t speak Arabic and won’t suspect a white woman. Throughout Mama Weed, crime is seen as a necessary response to systemic oppression – mainly of the patriarchy. Mama Weed has its quaint side, especially as marijuana laws worldwide get liberalized and the war on drugs seems to have changed focus.

Isabelle Huppert is one of France’s most accomplished actresses, having acted in 150 films during her long career. She is often cast in roles as a woman without a moral compass. As her career choices go, Mama Weed serves as an amusing adventure before she dives back into more demanding roles.