Los Angeles, CA (The Hollywood Times) 7/14/22 – Gracing Outfest 2022 is Make Me Famous (2022), an interesting documentary about a relatively little-known painter named Edward Brezinksi, who was part of the 1980s art scene in the East Village of New York City in the 1980s. Filmmakers Brian Vincent and Heather Spore have done an admirable job of elucidating the jostling for fame and position that dominated much of the 1980s Downtown art scene in New York City. Nobody knew for sure who would hit the big time, so to speak. Keith Haring and Jean-Michel Basquiat, who enjoyed their moments in Andy Warhol’s orbit before their premature deaths, both appear in archival footage and photos, as does Warhol. Make Me Famous screens with Outfest at the Harmony Gold Theatre in Hollywood on Sunday, July 17, 2:00 PM. You can also see the film online beginning July 18 through Outfest Virtual Streaming: https://www.outfestla.org/films-and-events.

Make Me Famous brings the late painter and quasi-gallerist Edward Brezinski (1954–2007) to an iconic status, in retrospect. He was not an icon in the 1980s, though he did have a certain kind of following among the gay community. Edward was gay but had a rugged manly demeanor that many gay men found appealing. We really know very little about his sex life, and, as we see in this documentary, his foremost concerns were his painting and his endless hope for success. His determination often matched the tremendous rate of production in this driven man at a time when the art world’s success was all about fame and fortune, notoriety and erasure.

The film is a mapcap romp through the 1980s NYC downtown art scene through the lens of the colorful career of ambitious painter, Edward Brezinski, who was hell-bent on making it. We are introduced to a series of artists and gallerists who reveal what they know about the unsung painter through their memories of both Edward’s antics and his extreme artistic drive. Their tales also unveil the queerly rollicking history of the Lower East Side art movement from an insider’s point of view. The East Village in the 1980s was extremely run-down. Brezinski lived in a fifth-floor Bowery walk-up squalid tenement on E. Third Street across from a men’s homeless shelter. 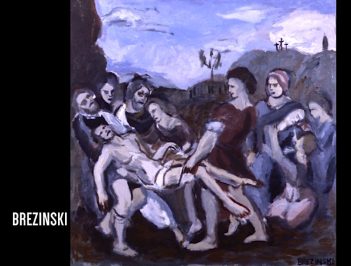 As well executed as Make Me Famous is, though, it’s far from the whole story. For one thing, those who benefited most from artists moving into the East Village, when it was a rundown neighborhood foreboding to the Uptown culturati, who were the real estate vultures. In the early 1980s, the Artists Group Collaborative Project helped aspiring artists look out for each other in the Lower East Side. There were soon 60 low-rent commercial store-front galleries in the East Village. David McDermott, a painter and a flamboyant personality, talks about how Brezinski used his apartment for showings and dubbed it the “Magic Gallery.” McDermott says that Brezinski’s portrait paintings created angst and exhibited a sense of internal struggle reminiscent of German Expressionism.

Edward Brezinski worked alongside Keith Haring, David Wojnarowicz, and Jean-Michel Basquiat in the Lower East Side art scene, but never reached the same level of success as his contemporaries. Make Me Famous uncovers why such a well-connected yet peculiar painter never made it, despite being so maniacally focused in his quest for fame.

What begins as an investigation into Brezinski’s legacy and his sudden disappearance later becomes a sharp, witty portrait of NYC’s 1980s downtown art scene. Gallery owners and fellow artists dish on insider gossip, name dropping, and contradicting each other in telling the story, resulting in an irresistible snapshot of an unknown artist that captures the spirit of an iconic era. At first, the place to be for artists in the East Village was the legendary Club 57, which was run by Ann Magnuson and frequented by John Sex and New Wave musicians, until the arrival of AIDS in 1984 which had a devastating effect on gay men and intravenous drug users.

Brezinski seems to have disappeared from the East Village in 1990 and the filmmakers capitalize on that disappearance in the last section of the documentary. Brezinski was well known as a personality in the art scene. His two famous art world episodes most talked about at the time (and thoroughly recounted in this film) had nothing to do with his paintings. There were no viral videos or social media back then. Had there been, Brezinski would probably endure forever on YouTube as Wine Glass Boob or Donut Dunce.

At a Soho gallery opening, Brezinski threw a glass of red wine in the face of art dealer Annina Nosei (who discovered Basquiat, and who is as gracious while recounting the incident and its aftermath for the camera) and he ate a preservative-infused donut that was part of an exhibit of Robert Gober’s work. Brezinski’s most scandalous incident occurred after the art world took a sudden shift towards Conceptual art. At artist Robert Gober’s opening in Soho, Brezinski became enraged with the art:  Wedding Dress, Bag of Kitty Litter, and Bag of Donuts.  Edward reached in the bag and shoved a donut into his mouth. Taking deconstruction to a new level, he ate the art. Robert Gober notes that the donut-eating was mentioned in Brezinski’s obituary.

Back in the 1980s there was considerable backbiting going on in the East Village art scene, and some of that survives to the present day, not surprisingly. There is an attempt to make some of the artists of the period seem more idea-driven than they were. Fame and money were prime motivators. If those now trying to reposition themselves as anti-art-market had been sincere about that back then, they could have participated in the Plexus art operas and Purgatorio shows at C.U.A.N.D.O., where hundreds of artists collaborated with dancers, musicians and other performers to create powerful statements that were aimed at undermining the art star system, among other things.

The poet and playwright Miguel Pinero makes an appearance in the movie, reciting his poem “Scatter My Ashes on the Lower East Side” at Brezinski’s E. Third Street apartment, which doubled as  the “Magic Gallery.”As actor and writer Eric Bogosian states in the film, actors are always “waiting for the phone to ring. But in the art world, you can get up in the morning and say, what am I going to make today?” Julie Jo Fehrle’s recounting of various encounters with Brezinski in distant places and unusual situations are in some ways high points. Kenny Scharf, Jim C (without whose archival footage this film would probably not exist), Claudia Summers, Mark Kostabi, Duncan Hannah, Marcus Leatherdale, Patti Astor, Eric Bogosian and others make appearances. those who survived the AIDS epidemic and the drugs and continue to create.

Marguerite van Cooke and James Romberger are excellent and lend an air of mystery in their retelling of the unusual and mysterious circumstances around Brezinski’s death. Edward Brezinski died much later of not-so-romantic alcohol abuse, it seems but far away in Nice, France. Along with Julie Jo Fehrle, Marguerite van Cooke and James Romberger accompanied the filmmakers to Nice in search of proof that Edward Brezinski had really died there. In the coda to the film, we learn that in 2017, the Museum of Modern Art in New York City decided to create a Club 57 Exhibit and, in it, included a number of Edward Brezinksi’s paintings. He had finally found some of the fame for which he hoped.