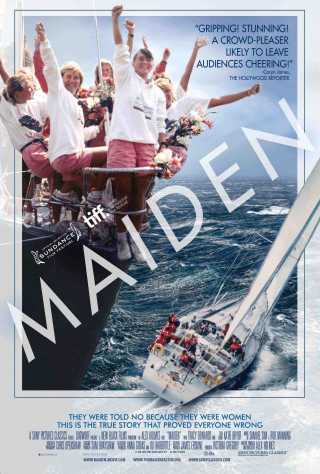 remarkable British sailor – Tracy Edwards. In 1989’s Whitbread Round the World, Edwards – the 24-year-old cook in charter boats – skippered the first all-female crew. The race covered 33,000 miles as the narrator tells us it is the most challenging on earth. This visually thunderous film showcases her strength and belief in herself even while enduring a chauvinistic yachting press who placed bets on her losing against her male competitors. The common theme was that the all-female crew – couldn’t and wouldn’t make it – in this male dominated sport that was viewed as needing brawn and testosterone.

Like so many films that stand-out as more than the usual faire of doing one’s best and getting ahead – Maiden places her audience alongside every frustrating and surprising moment along the way, cheering Edwards and her crew on. Even with potential sponsors rejecting her because they felt the women wouldn’t make it or die at sea – giving the race a bad name. Amelia Earheart’s legacy came to mind while watching Edwards and her fantastic crew on the wild open waters.

Edwards lost her father at age 10 but says, “My parents instilled in me a sense of determination so when I heard about the Whitbread Round the World Race, it was just something I had to do.”

The cinematography is stunning and interspersed with interviews of her crew as well as many of the men who doubted Edwards and her team. Most felt that the all-female crew wouldn’t make the first leg of the race.

This timely film happens in our global history as we see so much of what women have accomplished go backwards in a short period of time. It’s refreshing to watch Tracy Edwards as someone who believes in what she has chosen to do so hard that she actually remortgaged her home to buy a secondhand boat to make it to the start line. It’s human nature to have doubts and so thoughtfully the film reveals how hers were crippling at times – but she had the support of her crew and together, as with any team, –  and by sheer determination Tracy and these women shocked the sport world and the world itself proving that women are very much as capable as their male counterparts.

This film is a much welcomed almost mystical look into culture, male/female bias that visually smacks one’s senses with the sheer tenacity, beauty and courage of it all. Gripping, suspenseful and an eye-opening experience for anyone who doubts their dreams and the freedom to make choices for oneself – proving once again, we usually are the ones holding ourselves back. Take your boys and girls to see this family film so they learn along with the men and women in this film that we aren’t so different after all.

MAIDEN opens in theatres on June 28th at Arclight and Landmark Theatres. See it!