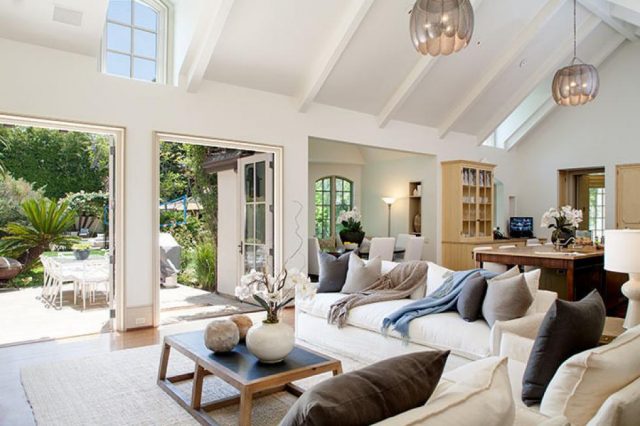 Having just turned age 60, Madonna might be feeling a certain nostalgia for the old days. Especially her former Sunset Boulevard mansionshe bought in 2003 for $12 million and sold in 2013 for $19.5 million. Since then it has transformed to one of Beverly Hills best homes.

With its prime location, Beverly Hills mansions are frequently updated, but Madonna’s former French Normandy-style home is ready for the spotlight with its recent makeover. Built in 1968, the 5,800-square-foot property has eight bedrooms and fourteen baths on over an acre of flat land with two separate guest houses. Designed to take full advantage of the climate for indoor-outdoor living, the bright sunny interior with its vaulted and beamed ceilings opens to a 60-foot pool and spa and a north-south tennis court on the mature landscaped grounds. A 15-seat theater is surround-sound connected to four other television viewing areas and the main house also includes seven fireplaces, a full bar, well equipped fitness center and staff quarters. The chef’s kitchen includes new custom cabinets and there is also a secondary kitchen.

Now living in Lisbon to help with her son’s soccer aspirations, Madonna has made a new album which she is currently promoting, though no title or release date is yet available.

Live like a superstar in Madonna’s former Beverly Hills mansion with its sparkling new renovations, listed at $35 million. Mauricio Umansky, founder and CEO of The Agency, Beverly Hills, is the listing agent.

The viewer’s votes are in and on July 17th the winners in a variety of categories of homes were declared. The Ultimate House Hunt is one of HGTV’s most popular online contests and this year’s 86 finalists from 13 countries received 880,000 votes on the cable program’s website. Some of the categories included historic, waterfront, urban digs, amazing kitchens and modern masterpiece. The overall global winner was a stunning villa in Sardinia, but the standout was the winner of the historic category – the 1834 Robert Smalls House in the historic district of Beaufort, South Carolina. The house, with its two-story wide front porches, is the epitome of the southern plantation house nestled in its half-acre of lush formal gardens where night blooming jasmine and gardenias must surely reside.

Smalls was born a slave in 1839 in Beaufort. During the American Civil War, Smalls gained his freedom impersonating the captain of an armed confederate transport ship and sailing her into the hands of the Union Navy. Referred to as a hero in the North and a traitor in the South, after the war Smalls returned to Beaufort where he was later elected to the U.S. House of Representatives. His former home was designated a National Historic Landmark in 1974.

Located on a peninsula surrounded by the Beaufort River with the city’s business district at its entrance, the 4,264-square-foot, three-level house includes four bedrooms and three baths. Formal living and dining rooms open to the right and left of the foyer with family rooms and chef’s kitchen with family dining room toward the rear. The upper level contains two bedrooms as does the lower level, which also has an office/music room and family room with beamed ceilings and French doors opening to the rear garden. The lushly planted formal gardens are appointed with detailed design, mature trees and welcoming with creeping fig on the entry step risers.

Voted HGTV viewers’ favorite historic home for 2018, the 1834 Robert Smalls House was listed for sale at $1.49 million and is now under contract. The listing agent is Bonnie Krstolic of Cora Bett Thomas Realty & Associates in Beaufort, South Carolina.