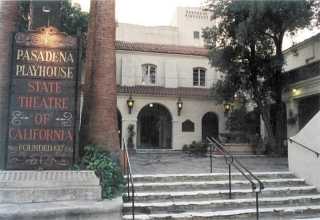 PASADENA, CA (The Hollywood Times) May 7, 2019 – MACH 33: The Caltech│Pasadena Playhouse Festival of New Science-Driven Plays energizes the conversations about scientific, mathematical, and technological questions by staging readings of new, unpublished, unproduced plays. The readings are open to the public and present a discussion with Caltech/JPL scientific panelists after the show. Our casts and crews feature professional actors and directors as well as students and members of the Caltech/JPL community. Festival playwrights have the unique opportunity to work with science advisors from Caltech and JPL and dramaturgs from the Pasadena Playhouse.

Bones of the Sea

Bones of the Sea tells the true story of Mary Anning, a working-class woman in Dorset, England, who helped to revolutionize the field of paleontology in the 19th century. In flashbacks, the audience sees various scenes of the self-taught Anning and the wealthy scientist Henry De la Beche as the two forge an unlikely friendship that lasts through fame and glory, disappointment and heartbreak.

James Armstrong (Playwright): Armstrong’s plays have been performed by Detroit Repertory Theatre, Wellfleet Harbor Actors Theater, the Abingdon Theatre Company, and other professional theaters. James wrote the books for the new musicals Ordinary Island and Keep On Walkin’, the latter of which won the Anna Zornio Children’s Theatre Playwriting Award. Armstrong has an MFA in Dramatic Writing from the Carnegie Mellon University School of Drama and is a member of the Dramatists Guild.

Satya Bhabha (Director): Bhabha is a director and actor born in London and based in LA. His films have played at multiple festivals including Tiff and Palm Springs, with his most recent, Cover Up (starring Alison Pill and Jason Ritter) being acquired by Conde Nast. He recently made his network TV directing debut on Fox’s The Resident, to which he will be returning next season. Bhabha has developed work with The Public Theater, Ars Nova, and Center Theatre Group, and recently directed The Imposter for New Guard Theatre Co. and Authority for Echo Theatre Co. His 48-hour long immersive adventure The Headlands Gamble was featured in the New York Times and likened by Bloomberg to “walking around in the world’s most assiduously designed movie.” As an actor Bhabha has been seen in films ranging from Scott Pilgrim to Salman Rushdie’s Midnight’s Children, and on TV in many shows including New Girl, Sense8 and Key & Peele. In the theatre Bhabha has performed at The Signature Theatre, The New Group, and Shakespeare’s Globe in London, among others. He is a graduate of Yale University where he was awarded the prestigious Sudler Prize for the Arts. 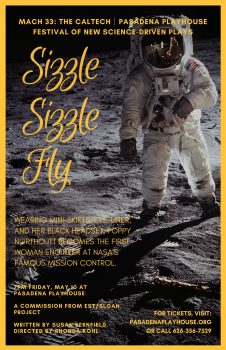 Frances “Poppy” Northcutt, a math whiz working at Mission Control as a “computress,” finds flaws in some unruly code, is promoted to technical staff – and becomes the first woman at Mission Control to slip on the headset as a NASA engineer. It’s December 1968, the cusp of a new world, she’s 25 years old, favors mini-skirts, eyeliner, and long blonde hair, Apollo 8 has gone behind the moon, and Poppy Northcutt holds her breath as the world changes faster than her return-to-earth trajectories can splash those dudes back down.

Susan Bernfield (Playwright): Bernfield’s plays include Tania in the Getaway Van (The Pool @ The Flea; New Harmony Project; Huntington Theatre Breaking Ground Festival); Stretch(a fantasia) (People’s Light & Theatre; New Georges; Ice Factory Festival; published by Playscripts); Barking Girl (O’Neill National Playwrights Conference; Chrysalis Theatre); the solo musical Tiny Feats of Cowardice, with music by Rachel Peters (FringeNYC; Adirondack Theatre Festival; HERE); and the solo play My Last Car(performed in living rooms throughout New York City) and have also been developed at Magic Theater, Playwrights Horizons, EST, The Lark, and more.  She is the founder and artistic director of New Georges, where she has advanced new plays (by women) in NYC since 1992. In this capacity, she is the recipient of Obie and Lilly awards.

Rhonda Kohl (Director): Kohl is a Los Angeles-based director whose West Coast premiere of For the Love Of (or, the roller derby play) was just remounted at the Kirk Douglas as a part of CTG’s Block Party. Kohl was the SDCF Traube Fellow on the Broadway debut of In Transit (Circle in the Square) with Kathleen Marshall, who she also worked with on Mamma Mia (Hollywood Bowl), Damn Yankees (Roundabout Theatre Benefit Reading), and Sweet Charity (Reprise 2.0).  She recently choreographed and assistant directed Native Gardens at the Pasadena Playhouse and is a participating designer in the Rogue Artist Lab. Other LA directing credits include: Around the World in 80 Days (Actors Co-op; LA Times Critic’s Choice), Pocket Universe (Hollywood Fringe) Look Back in Anger (LA New Court). She has assistant directed at the Pasadena Playhouse, Geffen Playhouse, and A Noise Within. Online: www.rhondakohl.com Social: @RhondaKohl 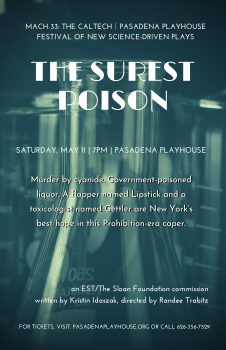 Prohibition is in full swing, but New York City is still celebrating New Year’s Eve in style—with a batch of poisoned hooch and an immigrant woman’s murder by cyanide. Cue Alexander Gettler, an obsessive chemist whose research helped create the modern field of forensic toxicology. With help from Lipstick, an intrepid flapper and indefatigable reporter who mistakes his laboratory for a speakeasy, Gettler must try to catch a murderer and convince the federal government to stop poisoning alcohol. Inspired by the real life work of Gettler and pioneering journalist Lois Long, The Surest Poison chronicles the dark side of the noble experiment.

The Surest Poison is an EST/The Sloan Foundation commission. 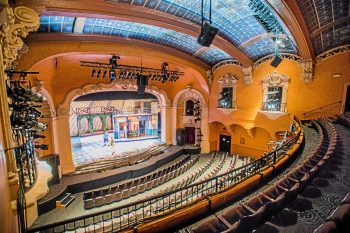