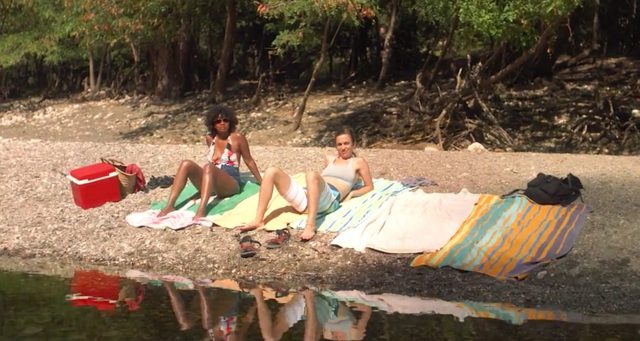 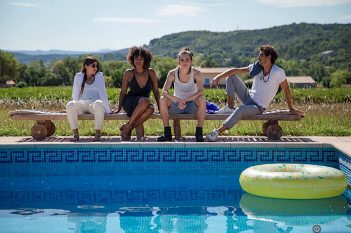 Los Angeles, CA (The Hollywood Times) 8/14/21 – Is it possible to be romantically involved with multiple people at the same time? Monogamy is still very much the norm in today’s societies, but different types of romantic relationships are gaining ground. What is fact and what is fiction about polyamorous relationships? Such is the stuff of the new film Ma Belle, My Beauty (USA/France, distributed by Good Deeds Entertainment, 2021), directed by Marion Hill. The film recently garnered the Audience Award at Sundance 2021 and screened at FrameLine 2021 in San Francisco. It has been included in the line-up for Outfest 2021 in Los Angeles. Bertie and Lane are two women who were formerly polyamorous lovers but seem to be equally bisexual. They reunite at a secluded farmhouse with a sun-soaked vineyard in the South of France, in a setting reminiscent of Call Me By Your Name.

The lead Idella Johnson imbues the character of jazz singer Bertie with her captivating presence and soulful voice. Bertie and her dashing husband Fred (Lucien Guignard) have left New Orleans for Southern France, where they’ve been living in his family’s gorgeous country villa. Their band had developed a devoted following, though we rarely hear them play until Bertie’s sudden six-month bout of stage fright suddenly leads her to stop singing. Anxious to fix Bertie’s issue before an upcoming tour, Fred invites Lane (Hannah Pepper-Cunningham) for a visit that turns out to be a not-so-welcome surprise.

The tension in Ma Belle, My Beauty stems from two women re-hashing an unresolved relationship, and a man playing semi-neutral observer with his own motives. Though Fred calls Lane “our ex,” Lane later explains that the only relationship she has ever had is with Bertie. Fred is giddy to see Lane and disappointed when Bertie isn’t. He desperately wants them to get back together because, as he tells Bertie, “You’re different when Lane’s here.” They cut a sweet double figure in the kitchen, slicing and prepping in concert with scarcely a word between them. The effect is more on the nose when they wear the same outfit to a party – a white shirt, a blue blazer, knee-length shorts.

In developing this unusual love story, director Marion Hill relates: “I grew up watching a lot of love stories. Love stories drew me into cinema. I just was in love with romantic films, such as those starring Audrey Hepburn and Robert Redford. When I started to study film, I realized that my first feature was going to be my own version of a love story that would bring together all different kinds of people, different types of personalities, and cultures. I knew I had a family place that I wanted to film in, and I always knew that I wanted to shoot my first feature there.” She developed her screenplay around the character of Bertie and that is how it all evolved. “Being in New Orleans, it was natural for me to focus on musicians. I work with a lot of musicians, and my friends are musicians. So things just kind of evolved from there, and piece by piece, components of the story came together. Actually, when I met Idella, things started to move along even more in terms of who Bertie was going to be. Once I had Bertie figured out, I met Hannah, and she helped me shape who Lane was going to be, as well as the dynamic between them.”

Lane and Bertie talk a little about why they broke up, but the conversations about non-monogamous relationships never really get resolved. Fred seems to play semi-neutral, but what exactly are his motives anyway? Perhaps all he really wants is for Bertie to sing again. And that she does. Bertie’s song, which was composed with Mahmoud Chouki with lyrics by Carmella Rappozzo, actually came before the film, before the film was even shot Rappazzo wrote the lyrics. Perhaps music artists are different and they find love in performing music. Director Marion Hill has a unique premise in her film although it is not entirely clear whether the characters will be able to resolve their relationships. In most societies around the world, people dream of finding “the one” and forming a committed relationship with that one person – for life. Movies and books are filled with “happily ever after” stories involving soulmates that were simply “made for each other.” Many people mistake polyamorous relationships for open relationships. Where exactly is this polyamorous relationship of the three characters headed? Perhaps the director leaves that question unanswered. 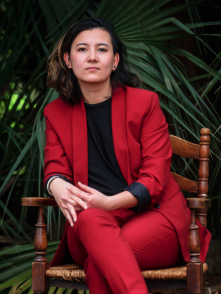 In an interview, director Marion Hill explains, “I was nervous to dive into polyamory, like many things it’s a spectrum. It’s a lot of hard work, and the responsibility I was taking on to represent polyamory authentically was big. I was drawn to polyamory because of the pillars of polyamory. One pillar is radical communication, another is knowing one’s self, another is being able to express your own needs, boundaries, and wants, and finally respecting everyone else needs and boundaries as much as you respect your own.” 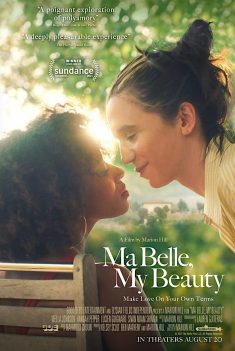 Ma Belle, My Beauty was intended as a feature film at Outfest but because the distributors are releasing the film in theatres city-wide on August 20, it is only available online as a virtual screening at Outfest 2021, August 14 through August 16: https://outfestla2021.com/ma-belle-my-beauty/.