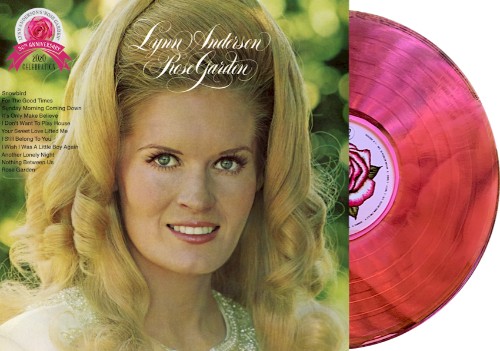 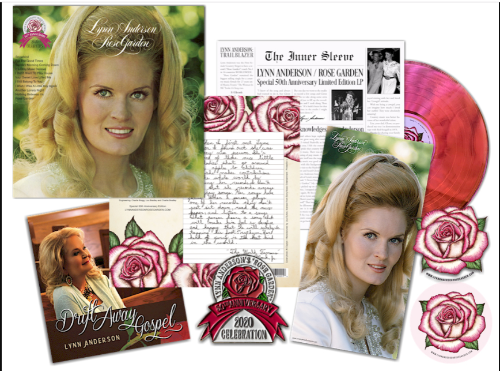 This exclusive anniversary release contains never before seen notes written to Anderson from country music star Reba McEntire and legendary producer Clive Davis while sporting a unique translucent pink color. The Lynn Anderson ‘Rose Garden’ Deluxe Collector’s Edition vinyl is now available just in time for Lynn Anderson Day on June 15. There are only 1,000 vinyl records available so be sure to get yours now and join the celebration!

“This has been such an exciting year for all things Lynn Anderson,” says daughter Lisa Sutton. “Between the albums being re-released digitally, the 2020 Lynn Anderson Roses and now the 50th Anniversary Deluxe Collector’s Edition of her album ‘Rose Garden,’ this has been a wonderful experience to see mom’s career continue to shine.” 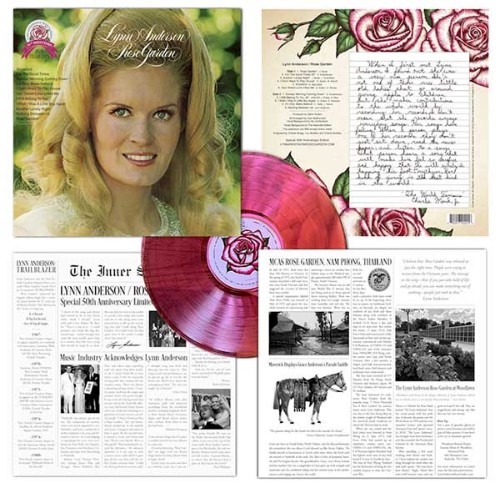 In light of the 50th Anniversary celebration, Sony Legacy Recordings re-released four digitally remastered albums of Lynn Anderson’s: ‘Cry,’ ‘Listen To A Country Song,’ ‘Singing My Song,’ and ‘Stay There ‘Til I Get There.’ Fans were granted access to these albums digitally for the first time in history and also had the opportunity to purchase a Limited Edition Lynn Anderson Rose Bush for Mother’s Day. Lynn Anderson’s sparkling vocals and sweet southern demeanor brought unmatched sophistication and glamour to country music and continues to leave a lasting impression nearly 50 years later.

To keep up with all other announcements visit LynnAndersonRoseGarden.com and follow Anderson’s social channels linked below:

YouTube | Facebook | Instagram | Twitter
About Lynn Anderson:
Lynn Anderson’s six-decade career charted 12 #1 singles and a total of 18 Top 10 hits, with more than 50 Top 40 hit singles total. Aside from being named “Female Vocalist of the Year” by the Academy of Country Music twice and “Female Vocalist of the Year” by the Country Music Association, she also won a Grammy Award for her signature song “Rose Garden.” Anderson later won a People’s Choice Award, and was the very first female artist to win an American Music Award. In 1974, she became the first female country act to sell out Madison Square Garden. Record World, a major music trade magazine of the 1950s to the 1980s, honored Anderson as ‘Artist of the Decade’ for 1970-1980. Anderson’s memory continues to live on through her legions of fans from around the world.