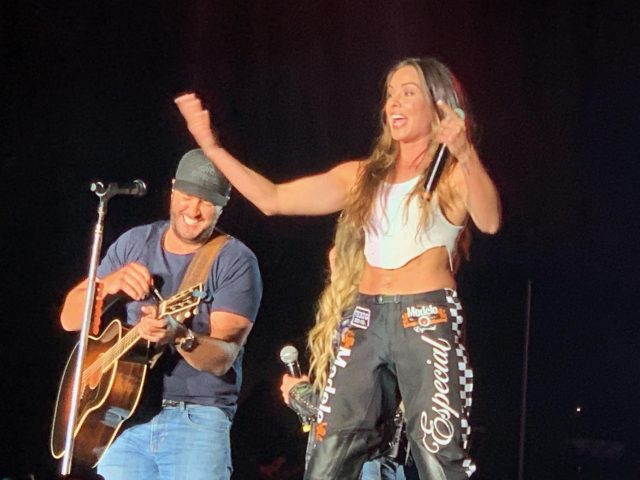 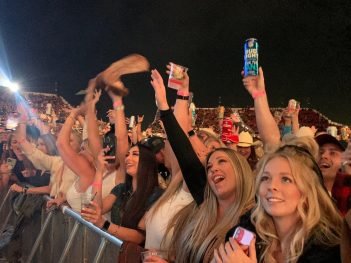 Los Angeles, CA (The Hollywood Times) 10/16/21 – Perhaps the most memorable moment of the Irvine show was the mini set where consistent country hitmaker Luke Bryan brought out his opening act to join him for a mini covers set. The three ladies from Runaway June and Dylan Scott, along with Luke, covered classics across the genres such as Tim McGraw’s “Down On The Farm” and Cyndi Lauper’s “Girls Just Want To Have Fun”.  The chemistry and shared love for the classic songs exuded to the audience and brought the entire crowd of an almost-filled to capacity amphitheater to their feet.  This moment was emblematic of Luke as a big brother of sorts, prepping the next generation of talent and his experience as an American Idol judge, recognizing true talent. 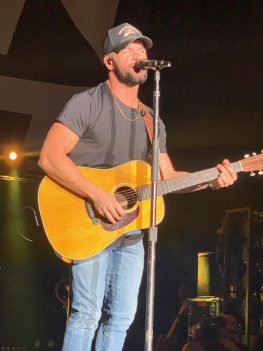 With 24 country airplay #1 hits, Luke didn’t disappoint by playing most of them but you can tell Luke has been doing this a lot. From his nonstop touring to creative marketing plays like Crash My Playa, Luke himself is a giant institution. Everything is carefully curated, from the balanced selection of songs from each of his albums to his almost choreographed moves even on slower numbers like “Drink A Beer” as he strummed his guitar once in a while but focused mostly on facial expressions and pretty boy movements. It is obvious Luke is a solo act as band interaction was minimal especially compared to opener Dylan Scott, who worked with his drummer to distribute freebies to the audience and was constantly playing off the live energy between his band mates. 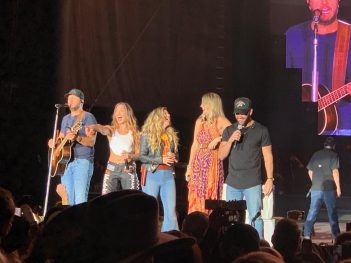 Compared to the greats like George Strait who can command an audience just by standing there or the theatrics of Garth Brooks’ arena performances, both artists connect. Luke’s performance feels like it’s striking a calculated middle ground and results in a sing-along but with slightly less electricity. But the songs are such memorable ditties, that’s really all he needs to keep the crowd entertained. 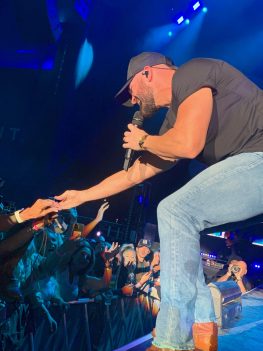 Even in opening number “That’s My Kind of Night”, there was a kind of restraint and sticking to the playbook, where I would have loved to see a departure from the record, even just a little bit  The bro-rock classic is ripe for some sort of improvisation. After all, it’s a live performance and I can listen to the record at home or on Spotify any time. But all good, most of the crowd is singing along to every word. 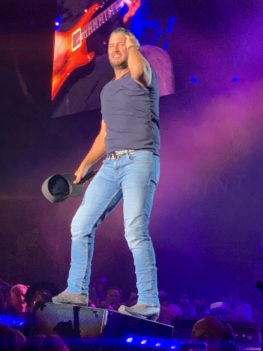 Perhaps Luke himself has played his songs so much and is surrounded by his $42 million a year brand that a big Hollywood rock star like him, he needs a break from his own songs. I sensed he was eager to just let his hair down, or take his cap off once in a while. And it was in the covers that he shined such as his rendition of Kenny Chesney’s “When The Sun Goes Down”.  Luke is a true music fan. And he was a fan of his two openers. 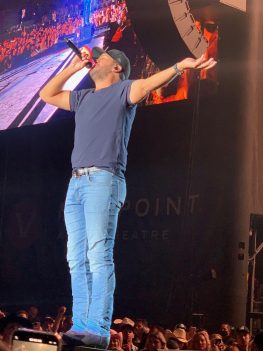 Runaway June shined. I didn’t know what to expect at first. Was it going to be like the typical girl groups that country has uplifted in recent years, such as the Dixie Chicks, SheDaisy, Lady Antebellum or the Wreckers? Yet it was fresh. And talent was overflowing. John Wayne’s granddaughter was part of a trio of women out front. Though Naomi Cooke is the lead vocalist, Jennifer Wayne and Natalie Stovall’s harmony vocals, along with their guitar and fiddle duties respectively, showcased each lady’s musician chops that leave you impressed and entertained. On top of this, their lyrics such as in the empowering “Buy My Own Drinks”, are interesting, fresh, hooky and avoid girl group cliches. The depth and solid talent make them a group to watch out for. This trio will do some major damage with their beauty, talent and professionalism.
Dylan Scott demonstrated better than anyone that evening, what a true live performer does best. Of all the acts he was the one best able to get the crowd going. The Louisiana boy with recent huge radio hit “Nobody” and past #1 smashes like “My Girl” and “Hooked” knew how to work the crowd. His charming banter which positioned him as a Louisiana down home boy out west was in contrast to Luke’s Hollywood sized celebrity. Most importantly, Dylan knew how to connect to the crowd, asking which decade the filled up stadium was from as people identified with being an 80s kid, 90s kid, or 2000s and even giving love to the older generations. Going one step further he played medleys of genre crossing hits such as Linkin Park’s “In The End”, back to back Bon Jovi hits “It’s My Life” and “Living On A Prayer” and back to country with George Strait’s “Check Yes Or No”.
You can tell that Luke himself was so impressed with the talents of his opening acts. While usually it’s the other way around, a seasoned performer like him needs to be around this young energy to keep things fresh and inspired. But it really is a testament to Luke’s love for mentoring young talent and sharing the stage with them. Country music has a bright future with Dylan Scott as a formidable live performer and the balance and quality of Runaway June but we hope Luke will be around a long time to keep cranking out those hits.