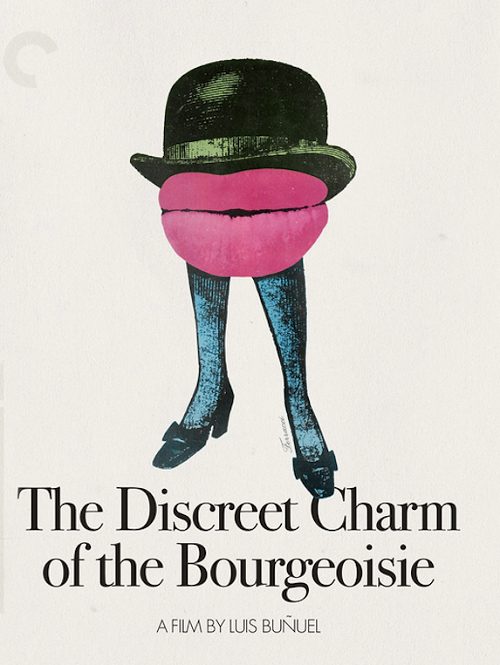 No film director has ever been able to integrate dreams and narrative as seamlessly as Buñuel and his 1972 film The Discrete Charm of the Bourgeoisie is one of his surrealist masterpieces. Currently a 4K restoration of the film is screening at several Laemmle Theatres in Los Angeles. Buñuel was in a way the ultimate auteur director, forging a creative identity not through subject or style, but by vividly showing us his own wholly idiosyncratic view of the world, his personal alternate reality, in one film after another.  Like a number of Buñuel’s later films, his 1972 comic masterpiece The Discreet Charm of the Bourgeoisie is organized not around a traditional rising and falling arc of action but, like a piece of music, around a theme and a set of variations. Here the theme is six people – three men and three women – trying to sit down for a meal and repeatedly getting interrupted before they can get started. The variations consist of their trying time after time to dine, only to be thwarted again. No matter what the circumstances, they just can’t seem to finish a meal. It’s perpetually delayed gratification, the gastronomic equivalent of involuntary coitus interruptus.

Around half-way through the film, he introduces the subject of dreams when a young soldier interrupts the would-be diners to describe the dream he had the night before. From this point on, without ever losing its narrative thread, the film becomes a series of episodes which each culminate in a dream of some act that is shocking to the bourgeois sensibility – an act of extreme public embarrassment, of violence, of the supernatural, of death. The more of these episodes we see, the more the film itself takes on a dreamlike atmosphere and the more we begin to wonder if the entire movie might be a Chinese puzzle of dreams within dreams, all prompted by Rafael’s attack of the nocturnal munchies.

The film consists of several thematically linked scenes: Five gatherings of a group of bourgeois friends, and the four dreams of different characters. The beginning of the film focuses on the gatherings, while the latter part focuses on the dreams, but both types of scenes are intertwined. There are also scenes involving other characters, such as two involving a Latin American female terrorist from the fictional Republic of Miranda. The film’s world is not logical:  The bizarre events are accepted by the characters, even if they are impossible or contradictory.

The film features the suave Latin American ambassador Rafael Acosta (Fernando Rey, star of The French Connection), the dry martini aficionado Paul Frankeur, his perpetually smiling wife Simone (Delphine Seyrig), from Last Year at Marienbad, her queasy-stomached sister Florence (Bulle Ogier), gracious hostess Alice Sénéchal (Stéphane Audran), and her sharply dressed husband Henri (Jean-Pierre Cassel, from Army of Shadows). These six people are always arriving at elegant dinners to find they’ve got the day wrong; the proprietor’s lying dead in the next room; the tea room’s out of tea and coffee; the army’s dropping in for maneuvers; the roast’s a prop and they have been tricked into being in a play for which they know no lines; or the police decide to make a major bust. Add in the local Bishop Monseigneur Dufour (Julien Bertheau) who decides to serve as the new gardener for the estate of the Sénéchals but has a strange story of his own.

Buñuel plays tricks on his characters, luring them toward fine dinners that they expect, and then repeatedly frustrating them in inventive ways. They bristle, and politely express their outrage, but they never stop trying; they relentlessly expect and pursue all that they desire, as though it were their natural right to have others serve and pamper them. He exposes their sense of entitlement, their hypocrisy, and their corruption. In the dream sequences, he explores their intense fears – not just of public humiliation, but of being caught by police and of being mowed down by guns. At least one character’s dream sequence is later revealed to be nested, or embedded, in another character’s dream sequence. As the dreams-within-dreams unfold, it appears that Buñuel is also playing tricks on his audience as they try to make sense of the story.

There are intervals where a complete stranger joins the group to tell of his ghost-ridden and murderous childhood, and a soldier, just after giving the alarm of the enemy’s attack, is cordially asked to retell the story of his curious dream. But then these characters are constantly dreaming, although they are only awake after they’re found themselves in the most preposterous of tight spots – mayhem ensues at a sophisticated cocktail party where polite chit chat consists of pointing out every embarrassing fact about the Latin American republic of Miranda to its ambassador Fernando Rey – then Frankeur awakes to announce he’s dreamt that Cassel was dreaming. But these bourgeois always maintain their elegant couture, gracious politesse, and the quintessence of style, whether consummating a drug deal or sauntering down a country road.

As each dream tops the previous one, Buñuel seems to be pushing the boundaries of conventional narrative logic in the direction of dream logic, in which things don’t always make sense on the rational level yet somehow resonate on an unconscious level. It’s a surrealist vision of art in which images and incidents seem to spring directly from Buñuel’s unconscious and connect unmediated with the unconscious of the viewer, a way of artistic communication so inherently nonverbal that it is nearly impossible to describe concretely. This might all sound frightfully intellectual and rarefied, but Buñuel’s sense of detached amusement keeps the film from developing even the merest whiff of pretension. He’s basically just having fun with the notion that any sense can be made of a universe that is fundamentally absurd.

Buñuel returned time and again in his films to certain subjects, and The Discreet Charm of the Bourgeoisie touches on just about all of them – sex, death, Catholicism, fetishes and phobias, the convergence of dream and reality. What sets this film apart is that here Buñuel’s preoccupations are wrapped around his trenchant view of the mores and behavior of the bourgeoisie. His six main characters are exemplars of their class, people for whom surfaces and appearances are everything, not just in their homes, grooming and dress, and genteel pastimes, but above all in their deportment. They are unfailingly observant of the social niceties. Even when disagreeing they are decorous and restrained. Their guiding principle seems to be that one must respond to every situation with perfect manners.

It’s an ethos that in this film Buñuel thoroughly trashes. As we know, appearances can be deceiving, and that’s certainly the case with this group of people. In their public lives they might appear flawlessly urbane and mannerly, but their private lives leave a far different impression. Led by Rafael (Buñuel favorite Fernando Rey), the ambassador from a small Latin American country, the men are all involved in a cocaine-smuggling ring. Simone (Delphine Seyrig), the wife of another of the men, is having an affair with Rafael. Simone’s sister (Bulle Ogier) is a bored young woman who’s permanently half sloshed. The cultured Rafael has no qualms about having his country’s secret police kidnap a young female revolutionary, presumably to be interrogated and tortured or even assassinated.  Overcome with lust, Alice (Stéphane Audran) and Henri Sénéchal (Jean-Pierre Cassel) keep their dinner guests waiting while they sneak into the shrubbery for a quick one.  All those vulgar human urges these paragons of bourgeois refinement so thoroughly repress have to find an outlet somewhere, and beneath the surface their outwardly respectable lives are riddled with hypocrisy and vice.

The Discrete Charm of the Bourgeoisie is a very funny film and the humor is derived from the contrast between the social ideal these people have set for themselves and the sudden irruption of the unpredictable into their lives. Their world is all about control, both of themselves and of their environment, so any intrusion of chaos is bound to have an exaggerated effect. The first part of the film lulls us into an expectation of normalcy in the lives and behavior of these people, and when that normalcy becomes disrupted with increasing frequency and in increasingly outlandish ways, we’re caught off guard. The effect on us, as on the characters, is not just startling, but through its sheer anomaly very, very funny.

The Discreet Charm of the Bourgeoisie is certainly one of Buñuel’s best films. He directed the film at age 72 with exhilarating ease. The film won the Academy Award for Best Foreign Film in 1973, as well as the Best Film and Best Director with the National Society of Film Critics. Co-written by Buñuel’s longtime collaborator Jean-Claude Carrière, winner of the Writer’s Guild of America West’s Lifetime Achievement Award, the first foreign-language writer to be so honored.