San Perdro, California (The Hollywood Times) 10/29/2018 “I am the only one today talking to our guest. There are about five fellas that talk with our guest and one is a submariner.” Bob Rouse, WWII veteran who volunteers at The Battleship Iowa told The Hollywood Times this past weekend.

Just being on the ship and getting a tour of the history of from the 40s to the 80s from some of the men that were stationed on the ship, was awesome. The “Lost at Sea” exhibit was truly a great history resource that all of us should experience and bring the kids and grandkids to share a part of history and especially the exploration of finding lost ships.

The Lost at Sea exhibit is going on now, so don’t wait to get your tickets today: https://tickets.labattleship.com/mainstore.asp 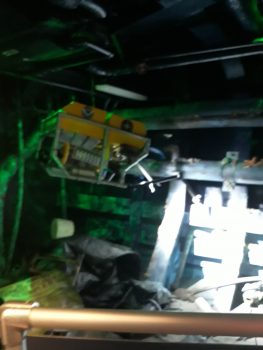 Lost shipwrecks, photos and artifacts from from vessels on display. 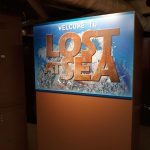 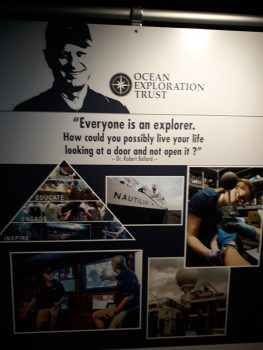 Dr. Bob Ballard is known for finding the mighty passenger Titanic which sunk to the icy Atlantic Ocean.

Aboard the Battleship IOWA Museum experience other liners and warships rediscovered by the well-known explorer.

The deep sea overview includes displays of the luxury liner RMS Lusitania, sunk by the Germans during World War I, explored off the coast of Ireland in 1993. Additionally, visitors will rediscover Titanic’s sister ship, HMHS Britannic, brought to the ocean’s floor by a World War I German mine; and PT-109, President John F. Kennedy’s boat, that at the age of 26, the future commander-in-chief risked his life to save his crew, becoming a war-hero and setting a future political stage. 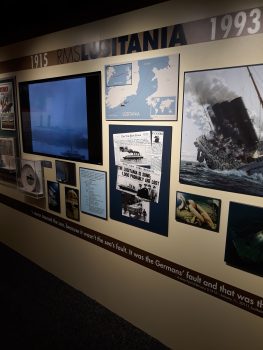 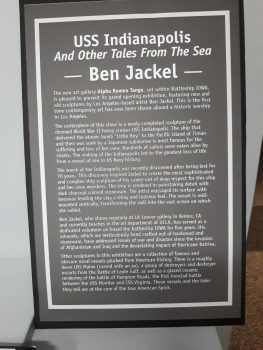 Additionally, Battleship IOWA is proud to showcase the first fine arts gallery onboard a battleship by noted contemporary artist Ben Jackel. After touring “Lost at Sea”, guests will visit the “Alfa Romeo Tango” where Jackel’s exhibition

“USS Indianapolis and other Tales from the Sea.”

The centerpiece of this show is a striking, newly completed stoneware sculpture of the doomed World War II heavy cruiser USS Indianapolis, the ship that delivered the atomic bomb “Little Boy” to the Pacific island of Tinian.

A Japanese submarine sunk the vessel, but it is most famous for the tragic suffering and loss of her crew. Hundreds lost in shark-infested waters. The sinking of the Indianapolis led to the greatest loss of life from a single vessel at sea in U.S. Naval history. 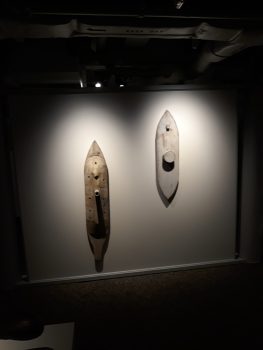 The location is on the third deck, near the semi-permanent show, “Lost at Sea: The Explorations of Dr. Robert Ballard.” General admission to the museum incorporates entry to the gallery.

A percentage of each sale will be donated to Battleship IOWA Museum. 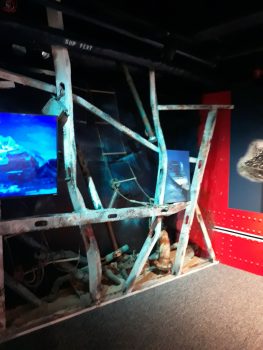 Ships are awarded ribbons and medals just like sailors. When a ship earns a ribbon, all the sailors serving aboard at the time are also awarded that ribbon. 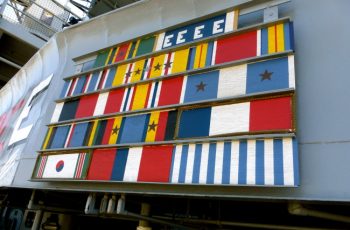 The ship’s ribbons are worn on the outside of her bridge wings. The USS IOWA earned 14 different ribbons over her nearly 50 years of service.

The USS Iowa Museum is a maritime museum located at the Port of Los Angeles in San Pedro, Los Angeles, California, United States. The museum’s main artifact is the USS Iowa (BB-61), lead ship of the Iowa class of battleships. 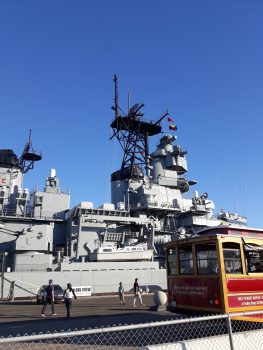 USS Iowa (BB-61) was the lead ship of the last class of U.S. Navy battleships to be built by the United States. The battleship was originally commissioned in 1943,[1] and served during World War II, the Korean War, and through the Cold War. Iowa earned 11 battle stars during her career and hosted three U.S. Presidents, ultimately earning the nicknames Battleship of Presidents and Big Stick. Iowa was awarded to the Pacific Battleship Center on September 6, 2011 for display at the Port of Los Angeles in San Pedro, California – home to the United States Battle Fleet from 1919 to 1940.

On October 27, 2011, the battleship was relocated from Suisun Bay Reserve Fleet to the Port of Richmond, California for painting and refurbishment.[2] On May 27, 2012, Iowa was towed underneath the Golden Gate Bridge on its 75th anniversary for final placement at the Los Angeles Waterfront.[3] 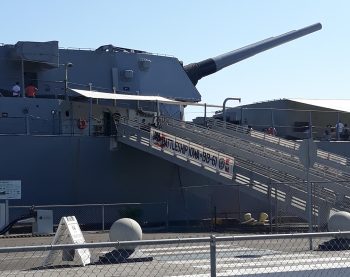 Iowa opened in Los Angeles on July 4, 2012 to a crowd of over 1,500 supporters and veterans at Port of Los Angeles Berth 87.[4] The USS Iowa Museum offers daily tours, group programs, education visits, special events, filming, military ceremonies, and is in the process of starting an overnight program. 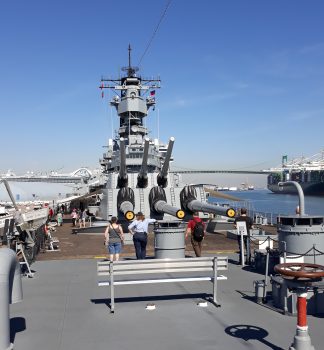 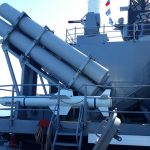 The ship is located at the Los Angeles World Cruise Center and has over 2,100 parking spaces available. 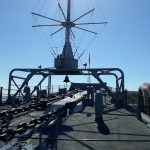