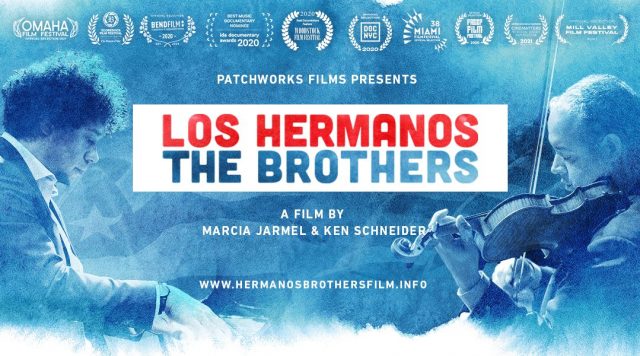 Los Angeles, California (The Hollywood Times) 5/13/2021 –  First Run Features has acquired the award-winning documentary feature Los Hermanos / The Brothers and will release it in theaters nationwide (via a mix of in-person and virtual cinema runs) starting Friday, May 14 in dozens of cities including Chicago, Los Angeles, Miami, New York, as well as Akron, Buffalo, Kansas City, Sarasota, Winston-Salem, and many others. Directed by Marcia Jarmel and Ken Schneider, the film follows virtuoso Cuban-born brothers — Ilmar the violinist, and Aldo the pianist — who live on opposite sides of a geopolitical chasm a half century wide. Linked by music and dreams, their unfolding story offers a nuanced, often startling view of nations long estranged, and a vision of what can happen when borders can be crossed. The Hollywood Times spoke to the directors of this powerful film.

Marcia, what is possible when walls come down and borders are crossed?

So many possibilities. Many of us know what it is like to be separated from the people we love, especially now during the pandemic. What we might not know is what we are missing when artificial barriers come between communities and cultures. The arts have the capacity to build bridges between cultures, histories, languages–none more powerfully than music. You see what universal beauty and depth of feeling is expressed when the brothers in our film are finally allowed to collaborate.

Tell us about your film, LOS HERMANOS/THE BROTHERS.

One of the beautiful things about documentaries is that unlike scripted films, you can’t control what will unfold in front of the camera–for better and for worse. We commit to being present with the camera when and where something meaningful will unfold, but we have no control over the outcomes. No makeup and wardrobe. No “ACTION!” But plenty of mishaps and missed opportunities. If we are lucky, there are miraculous moments of serendipity that we could never have planned nor written.

Case in point—the Havana airport scene when Ilmar, the violinist brother who lives in the US, arrives in Cuba. We had so much anticipation for that shoot, to capture the moment when the brothers first see each other, when their kids greet their cousins. We secured the permits to film in the airport. The crew set up early. We were ready to go. Then the Cuban brother Aldo couldn’t find Ilmar. He was disappointed and angry. What unfolds after is one of the most humorous and true-to-life scenes in the film.

Los Hermanos/The Brothers is a music film, a road movie, a family story that is deeply resonant with our times.  Aldo and Ilmar are virtuoso Cuban-born brothers. Violinist Ilmar made the choice to come to the U.S. Younger brother and pianist Aldo chose to stay in Cuba. They love their own countries, each other’s countries, and each other. Their countries make it virtually impossible for them to see each other, let alone collaborate, something they’ve dreamed of since they were 14 and 8, when Ilmar left to study abroad. When U.S. policy shifts and Aldo is finally able to tour with Ilmar and his quartet, they hit the road across America. We come  to see the US through Aldo’s eyes as we’ve seen Cuba through Ilmar’s Cuban-American eyes.  Like a musical suite, the soundtrack, composed and performed by the brothers and the Harlem Quartet, mirrors their story, becoming a character into itself.

How is this family disrupted by geopolitics?

Los Hermanos/The Brothers is not conceived as a political film, but without politics there would be no story. Instead we’d have a concert movie, two tremendously talented brothers playing music together. But because of the ramifications of the U.S.’s 60-year-old cold-war era embargo of our island neighbor, just 90 miles away, what should be simple is tremendously complicated. There are Byzantine rules and regulations about what you can do. It’s expensive. And most urgently, it is difficult, sometimes impossible, for Cubans to get visas to travel to the U.S.. Yet a temporary thaw in US policy catalyzes the brothers’ U.S. tour. They express joy and satisfaction in their remarkable music, that like the story itself, crosses boundaries. Genre-defying, it is rooted in western classical music, syncopated with Latin and American jazz, and inflected with Afro-Cuban rhythms in a most distinctive and satisfying cocktail.

Ken, Which scene moved you profoundly the most?

Due to the U.S. embargo of Cuba, Aldo and Ilmar’s time together had been necessarily rare and brief. When Ilmad (and sometimes his family) were able to spend a week or two together in Havana, it was mostly family time, brother time, cousin time–lots of laughter, time with family and friends, and, if the stars aligned, a family concert in one of Havana’s fabulous halls. Attempts to record in Cuba were thwarted by time and the dearth of quality studios and pianos.  So when they said they would try to get Aldo a visa to allow him to record in New York, we nearly jumped out of our skin. We moved heaven and earth to help them find a good studio and piano, and we asked Aldo to compose a piece for the film reflecting the moment.  Entitled Hermanos, the gorgeous melody mirrors the emotion of their time together. The intensity of their performance and their obvious delight in playing together brought us to tears as we watched from the control room. It was a special moment to witness and to record. As the last note reverberated in the studio we looked at each other and knew that even though their story continues to unfold, this moment would end the film.

What impressed you the most about these two brothers?

So much. There is their virtuosity for one. But more than that I would say that they are both mensches (Yiddish for a person of integrity). They are heart forward, funny and fun-loving–generally a delight to be around. And they spread that joy whenever they perform. We were so fortunate to be making this film during these dark times and to be every day in the editing room listening to their music.

What lessons are learned?

Culture succeeds where politics fail. Politics can erect walls; culture can tear them down. Music transcends all borders, as we have seen both Aldo and Ilmar perform with, rehearse with, and create with a huge variety of musicians representing a broad swath of musical idioms.

We’re excited for the film to screen nationwide (virtually and in a few wonderful places, in theaters) and it will have a PBS broadcast in the fall. But beyond that we are thrilled to support the work of   organizations expanding the diversity of classical music. Less than 2% of orchestra players are African-American; less than 3% are Latinx. We’re supporting the work of organizations developing the talent of  young classical musicians of color while helping established music institutions reach new audiences and reconsider what constitutes “the canon” of perform-able music.

Also, our film’s website has a “listen” page where anyone can listen to more music, watch videos of the brothers and their family playing. We have a “playlist” of some of our favorites. www.hermanosbrothersfilm.info

Praised for his “dazzling technique and rhythmic fire” in the Seattle Times, and dubbed a “formidable virtuoso” by The Times of London, Cuban pianist and composer Aldo López-Gavilán excels in both the classical and jazz worlds as a recitalist, concerto soloist, chamber-music collaborator, and performer of his own electrifying jazz compositions. Aldo began his formal piano studies at the age of seven, making his professional debut in Cuba at the age of 12, and developing  remarkable improvisational skills and talent as a composer. He has recorded six albums and performed his compositions in concert halls throughout Europe and Latin America, but was stymied in a U.S. career by geopolitics.  to perform in the U.S. Though they see each other when family finances and visa restrictions allow, they’ve never had a chance to collaborate musically—something they’ve longed for all their lives, until the door opens and our story begins.

Recognized as a child prodigy in Cuba, Ilmar Gavilán has had a distinguished career playing for world leaders from the Obamas to Queen Sofía of Spain. Based in New York for 20 years, he won first place in the Sphinx Competition as a young adult, and helped form the Harlem Quartet to mentor young classical musicians of color. Along the way, Ilmar also developed improvisational skills and has performed and released albums with Paquito D’Rivera, Eddie Palmieri and Gary Burton, and Chick Corea, with whom the Harlem Quartet won a Grammy. He continues to tour and teach with the Harlem Quartet, who are currently in residence at London’s Royal College of Music.