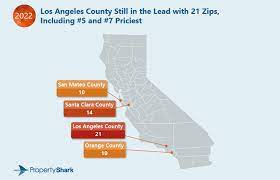 2022 has yet again been a year of new records in the country’s top zips, with many reaching dizzying new pricing heights, despite the wider economic shifts. Los Angeles County became the only county to claim two spots among the ten most expensive zip codes in the United States: #5 with Beverly Hills’ 90210 and #7 with Santa Monica’s 90402.

Other key findings from our study: