Los Angeles, CA (The Hollywood Times) 9/19/22 – George Lopez and his daughter Mayan Lopez will star alongside each other in their new family comedy series Lopez vs. Lopez. The duo will show viewers what it’s like being a Latino family working through the joy and pain of dysfunction and reconnection. 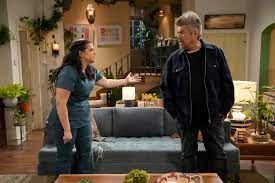 Last week during NBC’s TCA (Television Critics Association) press panel Mayan touches on the autobiographical aspects of the series telling the panelist; “You know, my parents got divorced about ten years ago. And within the last two years, my dad and I really solidified our relationship. There was a time where we didn’t speak and were estranged for about three years. But really, the pandemic brought us back together, and I started making TikTok’s with my family to reconnect. And Debby Wolfe was scrolling one day, and she saw one of our TikTok’s and this whole Lopez vs. Lopez was born from that idea. And I feel like, I say my story, but it’s also an amalgamation of the writers; stories, cultural references within Latino parent-child relationships or any minority. And so, we tried to do a great job, and we are doing a wonderful job on Lopez vs. Lopez of sharing those stories.”

George also chimed in when asked about his original series being based around his comedy act and reminiscence of working with his ethnically rigid grandmother. Panelist wanted to know if he had that kind of history with his daughter Mayan to draw material from, he replied “You know, I’m going to say yes. I mean, I’m going to say that Matt Shively is an incredible actor, an incredible comedian. And much like the young Caucasian, the gentleman that Mayan brought home, with a name that was tough to pronounce, but also in the fact that you must let kids and let young adults have their own life. So, I would say yes. You know, I’ve made some mistakes. I’d like to think Mayan hasn’t done everything perfect, or else, you know, be following in my footsteps. But I think the people that we’ve brought into this world are the right people to take the journey with.”

The series premieres Friday, November 4th, at 8 p.m. on NBC and airs the following day on Peacock.