Los Angeles, CA (The Hollywood Times) 11/12/21 – On October 11 at the AFI Film Festival in Hollywood was a screening of Lingui, the Sacred Bonds (Chad, 2021), the latest film from Chadian director Mahamat-Saleh Haroun, a Cannes regular who won the Jury Prize in 2010 for A Screaming Man. This is the third time one of Haroun’s films has been included in the AFI Film Festival and his first openly feminist film. It tells the story of a single mother, Amina (Achouackh Abakar Souleymane), who was shunned by her family for becoming pregnant at a young age. Suddenly Amina’s 15-year-old daughter, Maria (Rihane Khalil Alio), finds herself in the same situation. Except for Maria, reluctant to repeat her mother’s trajectory, and having already faced whispers and expulsion from school, wants an abortion.

Amina (Achouackh Abakar Souleymane) is a single mother living on the outskirts of N’Djamena, the capital of Chad, where she supports herself and her 15-year-old daughter, Maria (Rihane Khalil Alio), by making stoves with materials from salvaged tires. The film opens with a mesmerizing sequence of Amina at work: She cuts old tires open with a knife, pulls out the steel wires, and fastens them onto a base made of metal rods. She is focused, and the beads of sweat that form on her forehead, taking a winding path from the edge of her tight cornrows to the base of her round nose, signal a long morning’s work. After making another stove, Amina changes from her workwear – a navy blue T-shirt and black shorts – into a burnt orange fabric wrapped around her body and over her head. It’s a transformation that marks the difference between her inner life and her outer presentation.

Haroun uses the opening moments of Lingui to immerse viewers in Amina’s routine. A golden hue highlights each frame, softening the ripples of the river where she meets her friend Bintou (Chanceline Allah-Odoum Guinlar), sharpening the sense of chaos as they cross the highway to the market and heightening the sun’s oppressive heat. The implicit juxtaposition between Amina, who spends hours hawking the stoves, and Bintou, who loves music and spent the previous night dancing, offers viewers an opportunity to see how different Chadian women exist, halting any assumptions we might be tempted to make about who they are.

When Amina returns home, she immediately senses something is off. Maria, whom she affectionately calls Mamita, is awfully quiet. Probing merely intensifies Maria’s withdrawal, prompting her to lash out at her mother. “Don’t call me Mamita,” Maria says sternly before retreating to her room. Desperate for answers, Amina follows her daughter to school one day, where she discovers that Maria is pregnant and has been kicked out. The news fills Amina – who, we gather, got pregnant young and was subsequently rejected by her family – with unspeakable terror. She comes home and, in a fit of rage, beats her daughter, who declares that she wants an abortion. 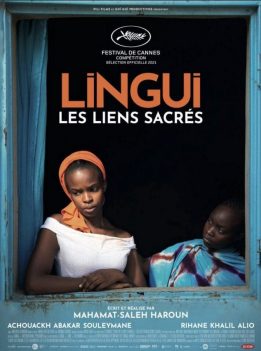 Haroun’s is a specifically Chadian experience. Amina is also afraid but she harnesses that fear and allows it to open her up to an unfamiliar, but beautiful vulnerability. She initially refuses her daughter’s request for an abortion: They are Muslim, she says; it’s not allowed in Islam, she intones; and then finally, in a moment of acceptance, how will they do it? How to get an abortion in a country where it is technically legal but impossible to access is the question that drives the rest of Lingui. Money, unsurprisingly, becomes Amina and Maria’s primary obstacle. When they finally find a doctor willing to perform the operation, he asks for 1 million CFAs. Determined not to let her daughter face the same fate she did – ostracized by family, shunned by a society that views single mothers as an aberration – Amina gets to work. She begins selling more stoves and even asks her neighbor, Brahim (Youssouf Djaoro), who proposes to her early in the film if he would be willing to have sex with her in exchange for the money.

It’s women who end up saving Amina and Maria – from Amina’s younger sister Fanta (Briya Gomdigue), who unexpectedly resurfaces, to a midwife (Hadj Fatimé Ngoua) who offers to help. They come from various walks of life and, as Haroun smartly makes clear, span different socioeconomic classes, but they are linked by an unshakeable sense of community. It is the strength of social bonding among Chadian women that make it possible for Amina to help her daughter. Director Haroun explains, “Lingui is a term that implies solidarity, mutual aid, and keeping each other afloat,” he said. “I can only exist because others exist, that is lingui.”