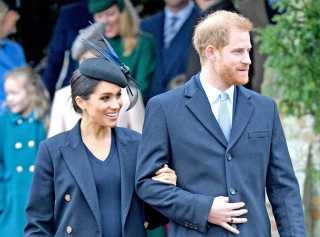 FOLLOWING THE NEWLYWEDS
THROUGH THEIR FIRST YEAR

Debuting later this year, the film continues the love story of newlyweds Duchess of Sussex, Meghan Markle and Prince Harry, pulling back the curtain to reveal the untold joys and challenges of life inside the royal family during their pivotal first year of marriage.

The movie is executive produced by Merideth Finn and Michele Weiss. Menhaj Huda directs from a script by Scarlett Lacey.  Production begins later this month in Vancouver and will debut this spring on Lifetime.

Celebrating 35 years of entertaining audiences, Lifetime is a premier entertainment destination for women dedicated to offering the highest quality original programming spanning award-winning movies, high-quality scripted series and breakout non-fiction series.  Lifetime has an impressive legacy in public affairs, bringing attention to social issues that women care about with initiatives such as the long running Stop Breast Cancer for Lifenow in its 25th year, Stop Violence Against Women which relaunched in 2018, and Broader Focus, a major global initiative dedicated to supporting and hiring female directors, writers and producers, including women of color, to make its content.  Lifetime Television®, LMN®, Lifetime Real Women® and Lifetime Digital™ are part of Lifetime Entertainment Services, LLC, a subsidiary of A+E Networks. A+E Networks is a joint venture of the Disney-ABC Television Group and Hearst Corporation.