“Patsy & Loretta” is based on the untold true story of the friendship between two of country music’s greatest icons, Patsy Cline (Megan Hilty) and Loretta Lynn (Jessie Mueller).

While Loretta Lynn and Patsy Cline have both been subjects of their own biopics — 1980’s Coal Miner’s Daughter and 1985’s Sweet Dreams, respectively — Lifetime’s Patsy & Loretta is the first film to center on the country music legends’ deep, though short-lived, friendship. 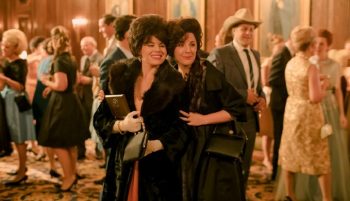 When they first met, Patsy was already one of the biggest stars in country music while Loretta was just a coal miner’s daughter, starting off with little to her name but a $17 guitar. Instead of seeing Loretta as competition, Patsy took Loretta under her wings to help her make it in Nashville. Soon, they became close friends, touring together, bonding over their husband troubles and commiserating on being females in the male-dominated music business.

Then in 1963, the country music community was struck with a tragedy when at just age 30, Patsy died in a plane crash. Despite the devastating loss of her friend, Loretta continued on in the industry and is today, known as the First Lady of Country Music. To this day, Loretta remains grateful to Patsy for her mentorship and above all, friendship, as the country music trailblazer that paved the way for Loretta.

Megan Hilty, best known for her starring role on NBC’s Smash, stars as Cline, while Jessie Mueller, who won a Tony Award for her portrayal of Carole King in Beautiful: The Carole King Musical, plays Lynn. Oscar winner Callie Khouri (Thelma & Louise, Nashville) directed from a script by Angelina Burnett. Sony Pictures Television produced the film, which was executive produced by Neil Meron.

Fudge and Russell were in from the ground up. “We were able to help [the filmmakers] maneuver through this story from the family’s point of view, and I feel like they valued that and respected us as a resources,” Fudge says.

Both Patsy and Julie talked about how their mothers were role models and inspired them to follow their own paths.”

“The thing that struck me always when my mom told stories about her and Patsy was the intimacy of that friendship. It was so much bigger than music business. But their friendship also changed country music,” Russell recalls of anecdotes about her namesake. Cline died tragically in a plane crash in 1963 at age 30, more than a year before Russell was born and roughly 18 months after she and Lynn met.

“When my mom first came to town, Patsy was already an established artist and my mom wasn’t part of the Nashville sound or crowd, so there was a lot of backlash, and a lot of mean and spiteful remarks being made about her and her music,” she adds. “Patsy had her back. Patsy would introduce her as, ‘You all know Loretta, my friend.’ In other words, ‘I’m the biggest thing at this party and I say she’s in.’”

“Patsy [was] making sure Loretta was paid before she went onstage. Patsy was big on not getting taken advantage of. She shared that rule with my mom and my mom stood by that,” Russell says. “Patsy’s friendship gave Loretta that bit of self esteem she needed. She was breaking all kinds of rules.” (Lynn’s book about the duo, Loretta & Patsy: Friendship That Changed Country Music, comes out next spring.)

Patsy & Loretta toes the line between documentary-level truth-telling and storytelling. “We spoke a lot about making sure it was honest and focusing on what were the biggest relevancies in the story,” Fudge says. “For example, mom was in a car wreck with her brother and she’s portrayed as being the only person in the car. That’s not true, it’s a jumbled fact, but it wasn’t the most important thing.”

The scene where Lynn sneaks Cline out of the hospital after the near-fatal head-on collision for a cheeseburger is also creative license, Russell says, though she notes, “She did sneak a whole lot of food in.”

“Women still have to fight for their place in country music, which is absolutely amazing 50 years after these women were doing it,” Fudge says. “These women have been significant. These women have topped the charts and broken records. I do hope this movie starts some conversations.”

In the end, both Fudge and Russell agree, the film is about all women lifting each other up.

“When I saw the rough cut, I felt the warmth and I felt the camaraderie,” Fudge says. “It’s something awesome to share with women and young people: that we are capable. We can be reckoned with and we can express ourselves. I think they brought that out in each other quite a bit, and it was beneficial for all involved.”

“As my mom told me, Loretta and Patsy just made each other better,” Russell recounts. “Better wives, better mothers and better artists. She said that’s what a great friendship does.”