The film premiers on the Lifetime Network Saturday, January 23rd, at 8pm ET

Hollywood, CA (The Hollywood Times) 01/21/2021 – Salt-N-Pepa, the new Lifetime biopic premiering this weekend about the eponymous female hip-hop duo, tells the story of the pioneering group’s meteoric rise through the hip-hop world to the top of the billboard charts, becoming the first all-female hip-hop group to go Platinum.

The film portrays the origins of the group when Cheryl “Salt” James and Sandra “Pepa” Denton, played by GG Townson and Laila Odom, respectively, meet in 1985 as students at Queensborough Community College in Queens, New York. The two quickly strike up a friendship that leads to them becoming coworkers as telemarketers for Sears, and then co-emcees in the duo that was initially called Super Nature and anchored by their producer and Cheryl’s then-boyfriend, Hurby Azor, played by Cleveland Berto.

The duo cut their first track, “Showstopper,” a response to rappers Doug E. Fresh and Slick Rick’s track “The Show” in Hurby’s mother’s basement. The song became a mild radio hit and thrust them into the gritty and male-dominated 1980’s New York City hip-hop scene. 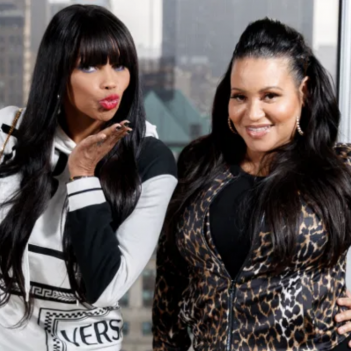 In a January 12th presser with Cheryl “Salt” and Sandra “Pepa,” Townson and Odom, and Director Mario Van Peebles, Cheryl confirmed that many classic Salt-N-Pepa tracks were recorded in Hurby Azor’s mother’s garage, including “What a Man” and “Shoop.” And, as portrayed in the film, the group’s smash 1986 hit, “Push It” was recorded in a bathroom!

As Cheryl and Sandra grapple with relationship troubles, stingy record executives, interpersonal conflicts, and the cutthroat hip-hop scene, the biopic guides viewers through the duo’s steady and quick rise to stardom. It features meticulously choreographed performances of many of the group’s hits including “Push It,” “What a Man,” “Let’s Talk about Sex,” “Shoop” and others. Townson and Odom sport replicas of some of the group’s iconic performance swag, including the Salt-N-Pepa bomber jackets worn in the “Push It” music video. The group’s longtime DJ, Spinderella, is played by Monique Paul in the film.

In the January 12th Q&A, Townson and Odom say much of their inspiration and preparation for the roles came from Cheryl and Sandra themselves, as they guided the actresses through their careers and provided insight into their true personal lives.

Through disputes over their level of compensation and controlling their own music, and balancing their careers and motherhood, the film demonstrates how Cheryl and Sandra overcame the particular struggles of women in the music industry. Also highlighted in the film is the important role Salt-N-Pepa played in the HIV/AIDS awareness movement in the 1980s using the platform of their song “Let’s Talk about Sex.”

The film was produced by Cheryl “Salt” James, Sandra “Pepa” Denton, and Queen Latifah. It premieres on the Lifetime Network on Saturday, January 23rd at 8pm ET.