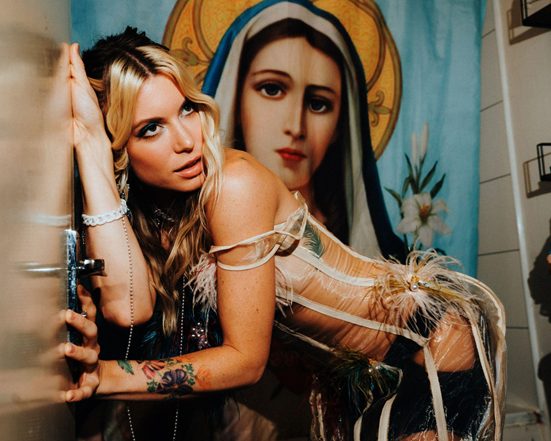 Singer-songwriter & DJ Anabel Englund, is a recent addition to the Life Is Beautiful line-up. Her performance is set for Saturday, September 18 on the Fremont Stage from 4:15 pm – 5:05 pm.  More info can be found here.

Anabel is appearing at Life Is Beautiful in support of her new single “Midnight Rapture” which will be released the day before on Friday, September 17 as well as her album Messing With Magic.

Following the release of her debut album Messing With Magic which garnered her four #1 dance music radio singles (“Waiting For You” with Yotto, “Underwater” with MK, “Picture Us,” “So Hot [MK & Nightlapse Remix]) within the last year, Anabel is back with a brand new sultry single. Containing elements of the Blondie classic “Rapture,” Anabel turns up the heat with “Midnight Rapture.”

Rapture in its definition means a feeling of intense pleasure or joy.  Anabel’s “Midnight Rapture” depicts a late night rendezvous edging towards euphoria as she sings “Said don’t take me home/Take me to a place you’ve never gone/Where we can lose ourselves till dawn” set to a sensuous dancefloor beat alongside the bells and guitar riffs taken from the Blondie original.

Singer, songwriter & DJ Anabel Englund’s sound is entrancing in its dichotomy; bright and carefree with her authentic Southern California breeziness. Other times she is irresistibly alluring with her dark, smoldering touch.  The 2020 iHeart Music “Dance Artist Of The Year” nominee explores the dynamics of that captivating contrast with her debut album Messing with Magic. The Los Angeles-based artist spent late 2019 and all of 2020 putting out singles from Messing With Magic leading into its formal release in December on MK’s AREA10 label with Ultra Records, with the Messing With Magic Deluxxe album following in 2021.  Beyond four #1 US Dance Airplay singles “Waiting For You” with Yotto, “Underwater” with MK, “So Hot (MK & Nightlapse Remix)” and “Picture Us” (marking her as the first female to score four #1’s in two years), the album highlights a variety of dance floor friendly tracks and heartfelt compositions including singles like “Party All Night” with Dombresky, “Warm Disco” with Lee Foss and “See the Sky.”

Englund has performed around the world at iconic festivals like Glastonbury, Coachella, Bestival, III Points and CRSSD, as well as venues like London’s O2 Academy, Ushuaïa Ibiza and the FriendShip music cruise. During the thick of the COVID-19 pandemic while the world was on lockdown, Anabel took the opportunity to promote her music by sharpening her DJ skills and acoustic performance to perform a variety of live streams including Mixmag Lab Home Edition, EDC Orlando Virtual Rave-A-Thon, Higher Ground with Diplo, SIRIUSXM’s BPM’s Empowered Festival, Factory 93 and Desert Hearts among others. She is also recognized for her eccentric, bold style and has performed at major cultural events like Paris, London and Milan Fashion Weeks.

In 2012, Englund stepped into the house scene, bringing her unique sultry, slow-burn voice to Pleasure State’s “Electricity” (her group project with Lee Foss and MK). She further cemented her arrival by following with “Reverse Skydiving” with Lee Foss and Jamie Jones’ collaborative project Hot Natured the following year. She has released music on Hot Creation, Defected and Desert Hearts.

There are a select few voices of house music that have paved their own pathway to legendary. Singer, songwriter & DJ Anabel Englund carries unforgettable, powerful melodies, and choruses to huge success.