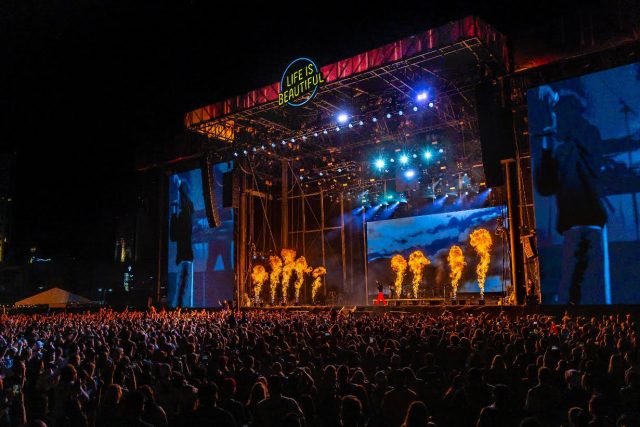 Yesterday, Sunday, September 18, was the third and final day of the Life is Beautiful festival, which had taken over eighteen city blocks in Downtown Las Vegas this weekend. The festival brought excitement and joy to fans from all around, as the Downtown area transformed into its very own community for those who find the beauty in art, food, music and life itself.

The three-day festival ended on a high note with a fantastic lineup of talent, highlighted by headliners Sylvian Esso, Jack Harlow and Calvin Harris, who all put on unforgettable shows at the Downtown Stage. Irish pop sensation, Dermot Kennedy, and indie-rock duo, Beach House, took over the BACARDÍ® Stage with captivating performances. The Huntridge Stage hosted high-energy performances by rapper, Young Nudy, and hip-hop star, Rico Nasty. As the festival drew to an end, EDM artist and producer, Said the Sky, closed out the festival with the final performance of the weekend.

Best known for her appearance on RuPaul’s Drag Race, famed drag performer, Latrice Royale, made special appearances at The Kicker Comedy Club today. The drag star chatted with comedians Sydnee Washington and Marie Faustin about everything 2000’s in a comedy show called Y2YAY. Comedians, friends and former reality costars of the show “Summer House,” Paige DeSorbo and Hannah Berner hosted a live episode of their podcast “The Giggly Squad” at the Kicker today as well. Fans were roaring with laughter as the duo poked fun at pop-culture, fashion, dating and more. The Kicker ended the weekend with the Emo Night Tour, where DJs took fans back to their days of teen angst by spinning all the classic punk-rock hits.

Tenille Arts, the country music superstar who is known for her hit songs “Somebody Like That” and “I Hate This,” headlined at the festival’s Western Country Club earlier this evening. In addition to Art’s performance, Stoney’s Rockin’ Country also hosted a few more line dancing sessions at the club.

As a fun surprise for festivalgoers, the cast of Cirque du Soleil’s newest show on the Las Vegas Strip, “Mad Apple,” wandered the streets of the festival grounds, showing off their acrobatic talent and entertaining crowds of people who stopped to watch.

For fans who couldn’t make it to the festival, the musical performances were streamed live on Life is Beautiful’s Twitch channel.

Life is Beautiful is set to return to Downtown Las Vegas for its tenth year on September 22– 24, 2023.

About Life is Beautiful

Life is Beautiful was born in 2013 as part of the major transformation of Downtown Las Vegas as a cultural hub and has since contributed over $350M of economic impact and cultural capital to the area. During the three-day festival, premier musical acts, experiential artists, comedians, thinkers and culinary talent flow into the urban streets of DTLV, in addition to the festival’s 170,000 attendees. What started as an event has become something more: a symbol of connection, joy and creativity. Life is Beautiful continues to be driven by its core mission to create a holistic experience which aids in positive community transformation and individual empowerment by collectivizing and inspiring through shared experiences driven by art and culture.