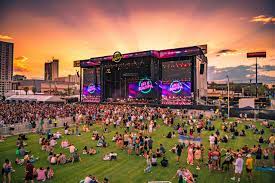 Las Vegas, NV (The Hollywood Times) 9/26/22 – As promised, we returned to Life is Beautiful in Las Vegas September 16-18, and if you can believe it, Life is Still Beautiful at this high profile musical event in the heart of Sin City. Highlights at this year’s festival included a predictably star-studded lineup and of course, the sweltering heat of September in Las Vegas. We began our romp in the desert with Cage The Elephant, and while they started a bit slow, we settled into their performance and ultimately found it satisfying and festival-worthy.

Charli XCX, T-Pain, Alison Wonderland, Arctic Monkeys, and more rocked the evening on opening night, and while there was a lull of exhaustion from a crowd who seemed to all come straight for work, the music was increasingly invigorating, literally setting the stage for an amazing festival.

Night two was everything promised, with Lorde rocking out in a hot pink two-piece leggings and bra ensemble, Kygo hitting the stage in style, and Kyle Watson absolutely taking it up a notch to rave territory with a festival-worthy tech set. One of the night’s most famous acts, however, The Gorillaz, simply weren’t as excited as I’d hoped.

No worries, it is a festival, so there’s always another act to hop over to, and Marc Rebelliet started his by saying he just got out of the bathtub and needed a robe, to audience laughter and cheers. The Blue Man Group joined Marc, and that was enough to take the set to the next level with an iconic vibe. Who know who they are? And yet…we all know who they are, so they were a fun and unexpected addition to the lineup.

As we continued to navigate the festival, we were lucky to stay at the El Cortez Hotel & Casino on Fremont Street, and they were absolutely wonderful. Rooms are spacious and comfortable, and ours happened to look down on the festival so we could see and hear the action even when we weren’t directly in the audience. They offered us an additional night at a deeply reduced rate, which made it really nice to just sit tight until the festival was over and enjoy the lovely room.

Moving into day 3 on Sunday, we were thrilled to see Lexi Jayde’s energetic performance of “newbury park” – “F— you for wasting my love,” she crooned as she bounced across the stage to the mic in a hot pink, oversized suit with an LJ on the pocket, and a big attitude. It was off the (in)famous Heart Attack Grill for lunch, where we were treated to the full experience.

As the final day deepend into the evening, Big Boi & Sleepy Brown took the stage, getting the audience to sing along with him. Pussy Riot then performed “Police State” in lingerie and thigh high platform boots – and of course, a whip.

Headliner Jack Harlow, SG Lewis, and Calvin Harris wrapped up the Sunday evening in Vegas. And as we reflected on the past two years at the festival, we couldn’t help but feel they had almost happened back to back. So we’re half- expecting to wake up tomorrow in Las Vegas, again, for Life Is Beautiful 2023. We wouldn’t miss another one.