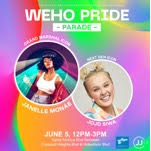 OUTLOUD: Raising Voices, created by Jeff Consoletti, set to debut as a live event, launched in 2020 as a ten-episode series on Facebook in lieu of Pride Celebrations happening in cities across the country due to the Covid-19 Pandemic, quickly becoming of the first major virtual LGBTQ+ showcases. Since its debut, OUTLOUD garnered over 1.4 billion media impressions and won several industry-topping awards including multiple SHORTY Awards for Best Use of Facebook and Best Use of Twitch, a MARCOM Award & a Cynopsis Digital Award for BEST LGBTQ Series. Follow @OfficiallyOUTLOUD #WeAreOUTLOUD. http://weareoutloud.com

About the City of West Hollywood and WeHo Pride:

For more than three decades, the City of West Hollywood has been home to one of the largest Pride celebrations in the nation. Hundreds of thousands of LGBTQ people and allies from around the world make West Hollywood their regular destination during Pride. This year marks the City’s inaugural WeHo Pride. WeHo Pride Weekend (June 3 – 5) will include a free WeHo Pride Street Fair representing a diverse array of LGBTQ+ community groups as part of visibility, expression, and celebration; the ticketed OUTLOUD Raising Voices Music Festival; and the inaugural WeHo Pride Parade on June 5. The WeHo Pride LGBTQ Arts Festival (May 22 – June 30) formerly known as the One City One Pride LGBTQ Arts Festival, will take place during 40 days at various locations throughout West Hollywood, along with selected online programming. Additional information about #WeHoPride will be posted at www.weho.org/pride as it becomes available.

Since its incorporation in 1984, the City of West Hollywood has become one of the most influential cities in the nation for its outspoken advocacy on LGBTQ issues. No other city of its size has had a greater impact on the national public policy discourse on fairness and inclusiveness for LGBTQ people. Home to the “Rainbow District” along Santa Monica Boulevard, which features a concentration of historic LGBTQ clubs, restaurants, and retail shops, the City consistently tops lists of “most LGBTQ friendly cities” in the nation. More than 40 percent of residents in West Hollywood identify as LGBTQ and three of the five members of the West Hollywood City Council are openly gay. The City has advocated for nearly four decades for measures that support LGBTQ individuals and the City is in the vanguard of efforts to gain and protect equality for all people on a state, national, and international level. #WeHoPride @WeHoCity.