Los Angeles, CA (The Hollywood Times) Last night, the Handmaid’s Tale wrapped its fourth season. The Handmaid’s Tale centers the story of June Osborne, a woman who endures rape from high-ranking male “Commanders” because she is considered a “handmaid” in a Christian fundamentalist regime, Gilead. In Season 4, she escapes Gilead, leads a resistance of other handmaids, gets captured, and flees to Canada. While her character is changed throughout the series, one scene in particular stands out.

When June flees Gilead to Canada, she is reunited with her partner, Luke. While Luke spends most of the season trying to emotionally connect with June after she endures abuse and torture, June remains emotionally closed off. In this context, the ninth episode does two things. First it portrays a scene with Luke and June, where June playfully has sex with Luke as she mounts him. The two are smiling and both seem to consensually enjoy having sex with one another. However, after a scene where Luke tries to get intimate with June and June rejects Luke, June confronts one of her abusers (the “Wife” of her rapist). After her confrontation, June then goes back to Luke, holds him down, and proceeds to have sex with him (by “mounting him’) when Luke expresses that June ought to hold off because he was not comfortable. In essence, June rapes Luke.

This scene is situated in the broader context of June’s character development. On one hand, June begins her journey as someone who conformed to Gilead’s abuses. She then transitions to someone who is able to outsmart the system and rebel against said system. Not only does she smuggle out kids, but she begins to kill high ranking officers. Thus, the scene can be read in several ways. The first way centers June as a victim to purport a “victims victimize” narrative that describes how victims of abuse can victimize other people. However, some might argue her ability to abuse others shows that she is both empowered against her victimizers (e.g. men) and took control of her sexuality.

To be clear, rape and sexual abuse against women and gender minorities is indeed a problem in society, and indeed, The Handmaid’s Tale critically examines this.  However, when June rapes her partner within the context of seizing her sexuality, she does so at the expense of her Black partner. While historically, Black men have been stereotyped as hypersexualized, dangerous, scary, and, especially, as rapists who specifically target White women, this scene redirects this racist trope. Rather than subverting this trope, it reinforces a new lineage of tropes on how White women seize their sexualities at the expense of Black men. For example, a similar trope occurs in Bridgerton. The protagonist, Daphne, rapes her Black partner, Simon, when she also “mounts” him, and continues to have sex when he asks her to stop. Like Bridgerton, the scene in the Handmaid’s Tale is not explained, contextualized, nor does it demonstrate the harm of rape, but serves to show how White women reclaim their autonomy over their sexuality by harming Black men. Arguably, Handmaid’s Tale might have addressed this harm when the episode’s epilogue has June explaining how the Wife of her rapist is bad, and pans to June in this characterization, but it still does not address Luke’s damage when he was sexually assaulted by his partner. 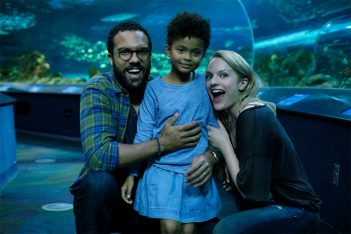 The Handmaid’s Tale centers June’s transformation from victim to empowered agent. Perhaps the transition from June being empowered to June being an abuser herself adds to the show’s intrigue. This is especially poignant especially because the show examines rape a tool of social control. However, by focusing on how June reclaims her power at the expense of a Black man (namely her partner), it fails discuss race as it intersects with sexual trauma and the narrative of how the abused become abusers and the impact of this “second hand” abuse. This is somehow now a narrative device or trope that centers Black men as targets of abuse. Thus, while the show is brilliantly examining the impact of trauma on women (as it should), it can also unpack these topics.