LET’S GO LUNA! follows the adventures of three friends–Australian wombat Leo, Mexican butterfly Carmen, and American frog Andy–as they traverse the globe with a traveling performance troupe called Circo Fabuloso.  At each of the Circo’s stops, Luna the Moon guides the trio as they get to know the local region and its people.
The gang’s adventures take them throughout big cities like London, Cairo, and Beijing where they explore all the things such as food, music, art, and architecture that make each place unique.  Judy Greer will voice the leading role of Luna.

“We all share the moon!” said Murray.  “Everyone around the world has the same moon.  It seemed like the perfect companion for the kids, something who’s been around the world and knows everything.”

The panel discussed how the series is designed to help young children learn about different cultures around the world and provide them with early exposure to social studies concepts that data shows are lacking in schools.  Messal said that some of his favorite questions to ask cultural anthropologists were, “What are some things from this city that you think viewers should know?” and “What are some things we can highlight in this city and culture?”

Each episode of LET’S GO LUNA! includes two 11-minute stories that are developed in consultation with cultural advisors from each region visited.  The writers then work with storyboard artists to create visually-driven narratives.  Songs capture regional musical styles and instrumentation, and interstitials feature traditional folktales associated with each location.

The show will encourage kids ages 4-7 to explore and appreciate cultures worldwide, all the while building global citizenship and social skills.  Sounds like such a nice way to break barriers! 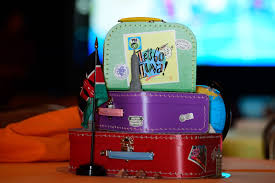 Watch for Luna and all the rest when the series launches later this month on the 24/7 PBS KIDS channel and the PBS KIDS digital platforms.  It is produced by 9 Story Media Group’s award-winning animation studio Brown Box Films.
Advertisement