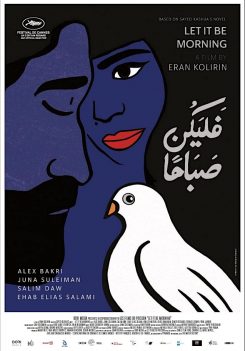 Los Angeles, CA (The Hollywood Times) 11/10/21 –  Last evening November 9 at the Asian World Film Festival held at the Landmark Theatres was a screening of an Israeli film Let It Be Morning (2021) directed by Eran Kolirin and based on a source novel by well-known Palestinian author Sayed Kashua. The novel was originally written in Hebrew as an ironic, politicized gesture and then adapted by the Israeli film director Eran Kolerin into a feature film with an Israeli Arab cast. Let It Be Morning explores both the political and human conflicts of the Israeli Arab community as personified by Sami (Alex Bakri), an Arab Israeli citizen who lives in Jerusalem where he has a good-paying position in a computer tech company. Sami is comfortable with his situation as an Arab who is successful in Israel and who arrogantly vilifies the villagers who never “made it out” of the West Bank. What marks this film as usual is that it is an Israeli film about a subject that is usually the purview of Palestinian filmmakers. As such, it is interesting that Israel chose Let It Be Morning as its official submission for Best International Feature Film for the 2022 Oscars.

At the beginning of the film, Sami travels to the West Bank to attend the wedding of his younger brother Aziz (Samer Bisharat) in a large house that Sami’s father is helping him to build in the village where he grew up. After the wedding, Sami and his wife plan to take their young son by car back to Jerusalem, but discover at night that the Israeli soldiers have put up roadblocks without warning, forcing Sami to turn his car around and return to the village. Sami is frustrated at being forced to spend time with his wife and son. What follows is a lockdown of the whole village which is near the Israeli border wall. Sami is stuck staying overnight at the house with his newly-married brother and his young bride. Things suddenly get worse as electric power is shut off in the village and the inhabitants of the village soon end up clearing out all the food in the local village shops. Tensions rise between family members and also between the different families who live in the Palestinian village.

Stripped of the distractions that usually get him through his day, Sami is at a loss. The protagonist is unable to cope with either his immediate or extended family, and so starts to reconnect with Abed (Ehab Salami), an old friend that he has avoided for a very long time. Abed has just acquired a minivan which he was hoping to use to transport people around the West Bank and he hopes to make a success of his venture to try to win back his estranged wife from whom he has been separated for some time. We soon realize that Sami has been growing apart from his wife Mira (Juna Suleiman) for some time and actually has been having an affair with an Israeli Jewish woman in Jerusalem. He is struggling with both social and sexual issues that are tearing him up.

As background to the story, the reason for the Israeli road closure is that the Israeli forces have caught wind of West Bank Palestinians working there on the house without a full residence permit, employed on the vast property Sami and another relative have invested in. The village is soon surrounded by IDF ground troops. As I mentioned before, the electricity is shut off; and supply runs are banned from entering. The move is as much a provocation as it is a punishment. The villagers end up arguing among themselves about who to blame and what to do. But they cannot agree on a single course of action. Eventually Abed, the man with the mini-bus, decides to organize a protest in the center of the village but even that fizzles out after he is bullied by a small group of armed West Bank thugs, who taunt him about his ex-wife who they claim to have used as a prostitute. 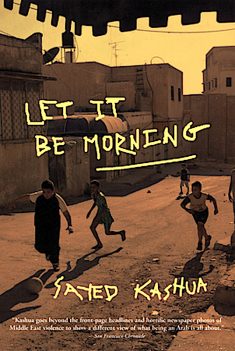 In the 2006 source novel by Sayed Kashua, Sami is a prodigal son who returns home to his West Bank village from Jerusalem to find that nothing is as he remembers. Everything is smaller; the people are petty and provincial. But when Israeli tanks surround the village without warning or explanation, everyone inside is cut off from the outside world. As the situation grows increasingly dire, the village devolves into a Darwinian jungle, where paranoia quickly takes hold and threatens the community’s fragile equilibrium. With the enduring moral and literary power of Camus and Orwell, Kashua’s novel Let It Be Morning offered an intimate, eye-opening portrait of the conflicted allegiances of the Israeli Arabs.

Let It Be Morning is also about conformity and solidarity within Arab and Palestinian communities. Amongst the more affluent middle-class, to which Sami’s extended family belong, there is an existential quandary about how the status quo may well be in their best interests. For Sami, to witness how different his life is from that of his peers sends an onrush of guilt. And once the military blockade begins, he is faced with reminders of the precarious nature of his life in Jerusalem: With the blockade, he cannot return “home” to Jerusalem to his job and will probably get fired. We will come to realize why radicalism and protest are the only viable strategies for the Israeli Arabs and Palestinians who are less fortunate than he is.

In his film version of the story, Kolirin as an Israeli filmmaker presents the overall situation largely as a dark, droll comedy. The film does not claim to have easy answers or solutions. Instead, the audience simply gets to witness the toll that the cultural divide is taking on these particular characters. When it comes to this conflict between Israel and Palestine, Let It Be Morning further visualizes for Israelis and other international viewers the brutality of living under constant military rule, surveillance and disruption. For those with a greater affinity for Palestine, this is hardly news. The film’s denouement has the villagers discovering the Israeli checkpoint suddenly disappeared “in the morning” – but only after an incident involving a tragic death. This may seem a false dawn of hope for some viewers. As Kolirin explained in the Q&A after the screening, the way back to Jerusalem was always there. Depending on one’s political perspective, this may or may not be the case.

This new film portrays the current predicament in Israel-Palestine in a slicker, more audience-friendly way, compared to the sundry documentaries on the subject, although it does feel like it is preaching to the converted. However, the Israeli Arab cast did not show up at the Cannes Film Festival for the international première of the Let It Be Morning. Instead, they chose to boycott the festival after seeing the film listed as “Israeli production.” Let It Be Morning is a co-production between Israel and France and has been picked up for international distribution by The Match Factory.