Manhattan’s most spectacular private residence – the

Venue for legendary gatherings, featuring such luminaries as

Manhattan has no shortage of remarkable, stunning private residences, but even by the loftiest Big Apple standards, the Glass Penthouse is unique. Crafted by Michael Fuchs, who was then CEO of HBO, it boasts 6,415 square feet of space, including a towering atrium that’s awash in light throughout the day.

And now, this legendary East Village property – just a block from Union Square, at 130 E. 12th Street – is available for purchase.

“There’s no private residence, anywhere in Manhattan, like the Glass Penthouse,” says exclusive broker Luciane Serifovic, the Realtor to the Stars. “From the chef’s kitchen, to the screening room, to a 24-foot ceiling, it’s the definition of a one-of-a-kind property. It’s no accident that Robin Williams, Bette Midler, and Tom Brokaw chose to attend parties here.” 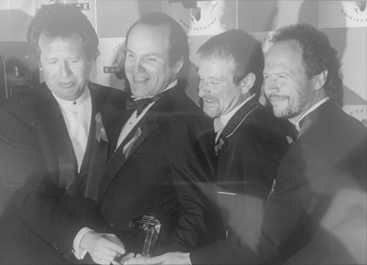 “When I purchased this place, I had a grand vision for a ‘Home in the Sky,’” remembers Fuchs, who’s credited with guiding HBO to its preeminent position among entertainment networks. “It took several years, but that’s what I ultimately built. We combined three separate apartments into one, and created the atrium by removing the roof and then reinforcing it with huge, steel beams. Now, it rests 40 feet above the living room floor.”

Fuchs’ magnificent creation also features 1,000 square feet of outdoor space, highlighted by a Tuscan-style, outdoor terrace and a separate, entirely private rooftop terrace that offers 360-degree, skyline views. The Glass Penthouse has 7,000 square feet of indoor space, with to four bedrooms and six baths, along with a staff suite.

“The building itself is understated,” Serifovic explains. “So, people come in, they ride this unassuming elevator to the top, and when the doors open … well, what they see literally takes their breath away. It’s magnificent.”

The Manhattan neighborhood that includes 130 E. 12th Street has a long, colorful history. As recently as the early ‘70s, the East Village was closely identified with the artists and musicians who made it a creative hotbed. In the ensuing years, particularly since the beginning of the 21st century, it has become increasingly upscale.

“When I purchased this space, the East Village was a very different place,” Fuchs recalls. “I wasn’t tremendously familiar with the city back then. I tended to think everyone lived in a box – and I wanted to create something very different. I wanted to be in charge of all the materials we used in the project. The whole thing was a rather scary undertaking, and at first I didn’t fit in all that well. Actually, all my neighbors back then thought of me as ‘the suit’ who’d bought the penthouse.”

In addition to parties – including quite a few gatherings to mark the annual Academy Awards – the Glass Penthouse has been the site of many political fundraisers. The stunning good looks of the residence made it appealing to a wide range of individuals, in a wide range of fields.

“Through the years, I was regularly approached about shooting movie scenes here,” Fuchs notes, with a chuckle. “I always said ‘no.’ After all, I was in the entertainment business a long while … so I know what can happen when you’re filming a movie.”