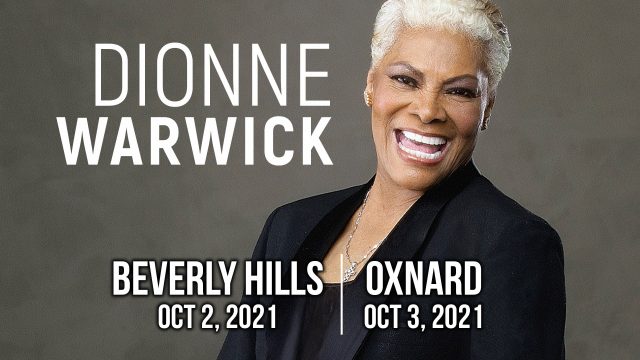 Playing the following night at the Oxnard Performing Arts & Convention Center, the six-time Grammy Award winner is taking the stage at both venues to celebrate the return of live music.

Beverly Hills, CA (The Hollywood Times) 9/29/21 – On October 2nd, beautiful singer and performer Dionne Warwick performs live at the Saban in Beverly Hills. Presented by Where Music Meets The Soul, the six-time Grammy Award-winning legend is taking the stage for two straight nights to celebrate the return of live music. On October 3rd, she is performing at the Oxnard Performing Arts & Convention Center. With an opening set by Southern California singer-songwriter Brandijo Kistler in Oxnard, both performances are guaranteed to be events that should not be missed.

Indeed, the Saban Theatre is one of the finest venues in all of Los Angeles. With Dionne Warwick’s show sandwiched between George Benson performing a fantastic show last week and Amy Grant coming at the end of October, the Saban has become the place where legends return to play post-pandemic. Hence, these shows are becoming a source of joy where people celebrate coming together and caring for each other.

Given some people’s hesitancy to attend live shows, tickets are still available both at the Saban and the Oxnard Performing Arts & Convention Center for these performances by Dionne Warwick. As a concert reviewer, I have attended many shows this season at venues promoted by Where Music Meets The Soul, and I have not had any issues or heard of any problems. Safety and fun go hand-in-hand.

Dionne Warwick truly is a legend with more than 75 charted hit songs and over 100 million records sold. Discovered by Burt Bacharach and Hal David in 1961, she recorded eighteen consecutive Top 100 singles. Who will ever forget such inspirational and fun songs like “Walk on By” and “Say a Little Prayer” to “I’ll Never Love This Way Again” and “Heartbreaker.” When she received her first Grammy in 1968 for Best Contemporary Female Vocalist Performance for “Do You Know the Way to San Jose?” she became the first African-American solo female artist of her generation to be honored. In other words, Dionne Warwick has been a trailblazer.

Moreover, she always has given back, raising awareness about social issues and fighting for justice. In 1985, she participated in the recording of “That’s What Friends Are For,” which became a number-one hit worldwide and raised awareness and significant funds for AIDS research, which she continues to support. Her other causes include The Starlight Foundation, children’s hospitals, world hunger, disaster relief, and music education. Raising money to prevent hunger in Africa, Dionne Warwick participated in the all-star charity single, “We Are the World,” and performed at “Live Aid.” Given her career accomplishments and philanthropy, she was awarded the coveted and prestigious Marian Anderson Award in 2017.

Recently, Dionne Warwick was inducted into The Grammy Museum, where a special 50th Anniversary career exhibit was unveiled. However, she also stays current, refusing to be a piece of walking history. Indeed, her star-studded album “Feels So Good” features duets and collaborations with some of today’s greatest artists, including Alicia Keys, Ne-Yo, Jamie Foxx, Ziggy Marley, and Mýa. She also was named 2019 Ambassador to the Smithsonian Institute’s Year in Music and is a 2019 Grammy Lifetime Achievement Award recipient.

Indeed, I was at the 2019 Grammy Lifetime Achievement Award performances, and Dionne Warwick entranced the audience with a soft and melodic performance. Despite rip-roaring performances by Snoop Dogg and Parliament-Funkadelic, it was Dionne Warwick’s presence that left a lasting impression. Thus, if you get a chance to see this legend perform live this coming weekend, take it. After all, Dionne Warwick is a living American treasure.