Paul Hewitt, creator Julie Plec, and stars Danielle Rose Russell and Matt Davis joined an informal Television Critics Association discussion over the summer to discuss the series.  Russell plays Mikaelson, a rare “tribrid” daughter of a werewolf/vampire hybrid, who attends the Salvatore School for the Young and Gifted.

As a refresher course, at the end of ‘The Vampire Diaries,’ Alaric Saltzman had started a boarding school for his powerful twin daughters, born of a dark witch coven and unable to properly harness their powers.  Now, the daughter of the nefarious vampire Klaus Mickenson, Hope Mikaelson, needs a place to learn to control her own powers—‘Legacies’ is an exploration of the extraordinary kids that live and learn within those walls. 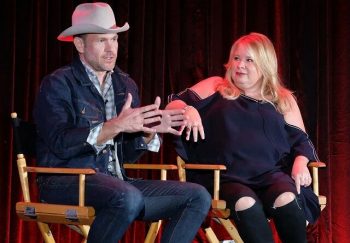 “’Legacies’ is absolutely born out of my continued love for what I’m now calling the TVDU, the TVD Universe, the world of Mystic Falls and vampires, witches, werewolves, and now many other things that fall in between and outside of that.,” said Plec.

Inside that universe, inside that school, truly magical things happen, in spite of the town of Mystic Falls thinking it’s simply a residential school for wealthy, troubled youth.  “Inside are a cast of characters of young supernatural beings who basically all have it in them,” said Plec.  “They’ve either been cursed by genetics or cursed by supernatural bloodlines.”

Plec says the cast of characters is particularly interesting because of their capacity for evil.  “They have some element of them that, were they to unleash it, could be a very dark thing, and they have it in them to be the villain of our story.”

The buzz is that the show is hot.  A video shared at Comic Con had reached over 10 million views as of the summer date of this panel.  “That means people seem to be excited, at least about the idea of what we’re doing.”

Drawing off the contemporary popularity of “Twilight”-esque vampire stories and the seemingly endless Harry Potter craze, ‘Legacies’ premieres tomorrow at 9/8c on the CW.  And the cast is nothing short of enthusiastic about it.

“When I read the first episode, I was so excited, because you have this whole new cast of characters and all these young kids and it’s super fresh and super angsty and super new millennial wave,” said Davis.  “And it’s really, truly exciting.”

Russell agrees, on both the show’s youth appeal and the excitement of unveiling the storyline.  “I think the show is very youthful and it’s very fun,” she said. “And even in ‘The Vampire Diaries,’ Stefan and Damon were over, what, a century old?”

And, Plec adds of the show’s accessibility to general audiences, it’s not something people will need to know a lot about in order to appreciate and understand “Legacies.”

“A lot of the supernatural beings that we’ll be opening our doors to are things that you never would have seen on ‘The Vampire Diaries’” she noted.  “You don’t need to know anything other than kind of just have a love for teen soap and/or like creatures of the night, you know, and then you’re pretty golden.”

“Legacies” is an entertaining romp into the dark world of raising troubled youth with extreme powers, and problems.  It’s got its tongue-in-cheek moments, which make it even more palatable.  Jokes and references to films with similar themes abound—the inevitable likenesses to Harry Potter and X-Men are acknowledged, not avoided, as a less-self aware series may not do.  And its arrival on the scene just before Halloween makes it the perfect chance to kick back and indulge in some not-too-heavy, but still creepy, entertainment. 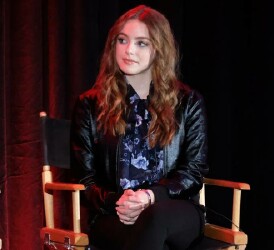