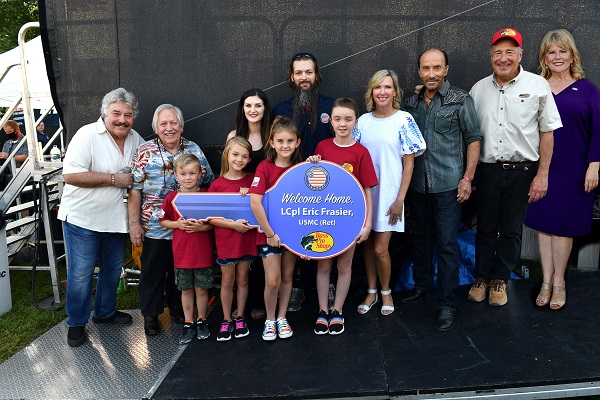 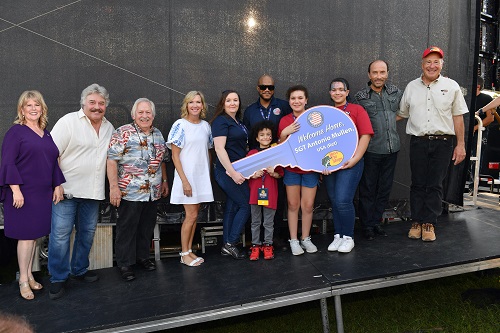 In addition to the awarded homes, Greenwood presented Kelley Paul, wife of Senator Rand Paul, the Lee Greenwood Patriot Award for her continued selfless efforts to help our wounded veterans.

Friday’s ceremony featured patriotic musical performances from Greenwood, Conlee, Orlando, and SPC JP Lane, USA (Ret.), including a color guard presentation from the Hendersonville Fire Department with hundreds of people to cheer and support these heroes as the community celebrated their journeys to new homes.

The ceremony also commemorated the 20th anniversary of 9/11 with a symbolic bell ringing, National Anthem, Pledge of Allegiance, wreath laying, 21-gun salute, playing of “Amazing Grace” on bagpipes, and a Tennessee National Guard flyover of two Army Black Hawk helicopters while the 13 names of those service members lost in the attack in Kabul, Afghanistan on August 26th were read.

About the Helping A Hero Honorees

Marine Lance Corporal Eric Frazier, a reservist out of Nashville, Tennessee’s 3/24 India Company was in Iraq only 27 days in October 2006 when his Humvee hit a roadside bomb that took his legs and injured his arm. The next year he thought his life had stopped when he awoke with his arm in a cast and legs gone. The lanky country boy hunted in the hills of Tennessee since he was old enough to carry a Red Ryder BB gun, and being outside – in the woods, walking the trails – was his life.

“The first thing I woke up and I seen my arm was in a big ol’ Styrofoam holder thing and I had lost my legs I was like, ‘I’m just not going to be able to shoot,'” Frazier said.

For Eric, the biggest challenge was how he was going to hunt again. The Fire Arms Training System near Walter Reed Army Medical Centre taught Eric and other servicemembers how to adjust to their injuries and fire military weapons despite new limitations, providing an opportunity to feel normal again.

Frazier is married and with four children: one of his own and 3 stepchildren. His life is full and he loves hunting, fishing, being with family, and giving back. He currently lives in a double-wide trailer in Morrison, Tennessee. Helping a Hero will build them a four-bedroom home that is fully accessible, allowing him to continue rebuilding his life.

Retired Army Sergeant Antonio Mullen, a U.S. Army legacy, also joined the Army on September 11, 2003, the anniversary of 9/11. As a mechanic, Mullen deployed twice to Iraq and during his second deployment, he listened to his wife Lacy give birth to their first daughter, named America. He wanted America to know that he risked his life for his country twice and would risk it again to protect her. His deployment was spent largely “outside the wire” in uncertain conditions repairing military vehicles, often under fire.

As a sergeant in his motor pool, he was shot at many times and even faced a suicide bomber. Tony’s Forward Operating Base was attacked while he was working on top of a Humvee. The blast from the explosion knocked him off the top of the vehicle flat on his back, hitting his head. The head injury cause a traumatic brain injury (TBI) and contributed to post-traumatic stress disorder (PTSD). His TBI has caused mobility issues over the years and additional internal injuries continue to threaten his independence.

“At the time I was unaware of PTSD or its symptoms and felt as though I had lost part of myself because it felt as though my husband hated me,” shares Lacy Mullen. “After doing my own research to find out what could possibly be wrong with my husband, I felt like PTSD was the most likely answer. He eventually had a breakdown and was placed in a facility for 30 days. This is when he was officially diagnosed with chronic PTSD and started the process of medical retirement.”

Tony is 100% disabled and has undergone surgeries for injuries to his back, knee, and hip. Following Tony’s medical retirement he obtained a Bachelors in Criminal Justice and helps military veterans face challenges with drugs and alcohol.

“This was his goal as he is a recovering alcoholic who was self-medicating due to his PTSD,” said Lacy.

Lacy serves as the Co-Chair for The Caregiver Support Program for Coalition to Salute America’s Heroes and helps caregivers learn to better support their military spouses who are medically retired due to injuries sustained in the Global War on Terror.

“Though our family has struggled, we are still in a healing process that will never be fully over,” Lacy said. “We constantly find new ways to work through the hard days when he is in so much pain he can hardly get out of bed; or those nights when the nightmares do not allow him to rest and the medication isn’t cutting it. We will continuously be thankful that we still have our hero. Even if he is banged up and bruised a little and when others look upon us in judgment because he doesn’t ‘look’ like a disabled veteran because he still has all his extremities attached.”

The Mullens have 4 children, 2 girls and 2 boys, and live in Rolla, Missouri.

About Helping A Hero:

Texas-based Helping a Hero is a 501(c)(3) non-profit, non-partisan organization providing support for military personnel severely injured in the war on terror. Our principal activity is to provide specially adapted homes for qualifying service members as well as engaging the community to provide services and resources for our wounded heroes and their families. Helping a Hero is one of the largest home-building organizations in the nation for wounded veterans. Our home recipients include veterans from 23 states whose permanent injuries have left them paraplegics, quadriplegics, amputees, with a severe TBI, blind, and with severe burns.

Helping a Hero partners with the homebuilder, the community, and the veteran on each home. Our home recipients are responsible for three things: 1) a $50,000 mortgage, 2) to live in the home as his/her primary residence for a minimum of 10 years, and 3) Use of the VA Specially Adapted Housing grant if eligible.

Helping A Hero is accepting applications from eligible wounded warriors needing a specially adapted home. We also invite the public to Nominate a Hero by completing the nomination form. Both the application and the Nominate a Hero form are available on our website at www.helpingahero.org.