“There is a crack… in everything. That’s how the light gets in.” — Leonard Cohen

Hollywood, CA (The Hollywood Times) – 03/08/2019 – “Shhstt… shhstt” The older man quieted me while pressing his brown fingers against his lips with eyebrows sharply raised.   He was seated in the kitchen chair and I stood in front of him as he slid a very large hand into my pants and began to fondle me.  I don’t know how many times it happened – when it started (first grade or second) or when it ended exactly – but I do know that my mother didn’t need to call the boogeyman.  The monster that walked among us had been in my life before I was born, he was my Filipino step-grandfather, George.  As an adult when I told my mother what had happened, she shook her head with disgust and said, “I always worried about George, he always wanted to take you somewhere alone so I made sure the three boys were always with you to protect you.”  Inside, I died. You see I have one older brother by fifteen months and two younger ones, so…

Three, clueless little boys were sent with a little girl to protect her from a monster they couldn’t see and I don’t believe our mother said anything to them.

In one horrifying moment I realized how little I seemed to mean to my mother and the house of secrets that surrounded me while growing up.  I never told my father what his stepdad did and I believe to this day had I done so, even though he was a correctional officer at the time, that he would have killed George and gone to prison for me.  All children deserve protecting, why didn’t I?  Who would believe me?  Many children ask the same question and it needs to be answered.

If 90% of molestors come from those, we know then our society’s rule to protect our children from “stranger danger” is backwards.  Now that Leaving Neverland is out with people taking sides on whether or not Michael Jackson abused these grown men as young boys instead of listening to their message of how they and their families were groomed. The grooming process is instrumental to the ongoing success of an adult skilled in gaining trust to abuse a child. With the internet – figures are on the rise. No one can quiet the mind of the one who has been touched inappropriately, had a childhood ripped away, lived in silent scream or what would happen if they told – no one can fully understand – unless or until – it has happened to you or someone you love.

The haunting question that plagues many is how could those surrounding the sexually abused child not know?  Better put, how many suspect and don’t act or how many choose to not hear or see?

Do you see the monsters that lurk in your home, neighborhood or churches?  If you sincerely believe no molester has been in your family, you either don’t know what to look for or fear what you may discover.  No one wants to be associated with such a vulgar act.  Do you even know who the sexual molester typifies? 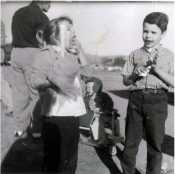 A ‘typical’ molester is male, has family, is educated, a hard worker, a normal sex life at home is religious with these traits traversing all levels of income and classes; he looks more like the average American male – in rarer cases, it’s a woman. This puts the monster near schools, playgrounds and religious settings and the typical child molester is in our neighborhood and in our homes.

We don’t want to believe we know them even when we see simple signs like a teenage boy or adult who pays too much attention to a younger child, even an infant.

George told my mother I deserved to be spoiled and offered to take me shopping – he wanted me alone.

Some of the things to look for in a sexually abused child: secretiveness, depression, change in sleeping habits, aggressiveness, flunking school, unexplained injuries, unusual interest in or knowledge of sexually related matters or expression of affection inappropriate for a child of that age, fear of a person or of being left somewhere and statements that their bodies are dirty or damaged.

Children are easily manipulated and coerced by adults to become victims.  Rarely will a child make up an abuse story, believe them (unless you have a clear reason not to) and investigate even if it means the person they’re afraid of is your spouse, lover, friend or relative.  Sex therapy programs are available through mental health departments to diagnose and treat and prevent those who could become offenders.  This idea is critical for change to happen yet when you can’t get a child to talk, the adults won’t or can’t see what’s happening and when it all opens up? Division of family, trust so who would want to help a sick person? The one who may come from the same place they’re perpetuating? There are no easy answers but there are so many avenues to get help, to become aware for your sake as well as a child, any child, especially your own.

Millions of molested adults know the shame, guilt, rage and the sense of isolation and feelings that the world and they don’t quite fit with one another.  We all deserve and have the right to feel safe.  I taught my son how to be.

“Mother, can you hear me now?”