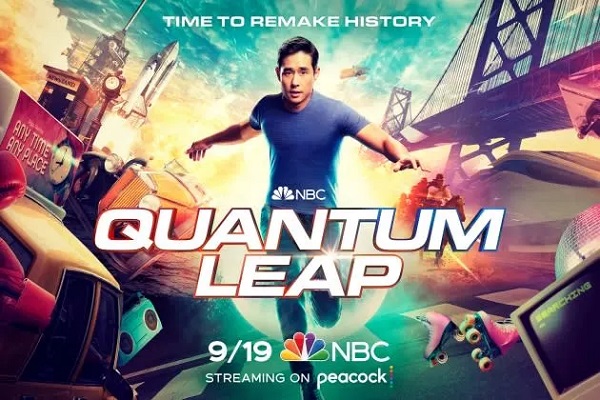 On Thursday, September 15, Consumers can Receive Gas for .91 Cents a Gallon – the Average Price of Gas in 1985 – in Los Angeles

“Quantum Leap” Premieres Monday, September 19 at 10/9c on NBC and streaming next day on Peacock

September 8, 2022, Los Angeles, CA – On Thursday, September 15, fans from all over the Los Angeles metro area can leap back in time and pay like it’s 1985 with Quantum Leap Day, an experience that celebrates the forthcoming series premiere of “Quantum Leap” on NBC and streaming next day on Peacock.

Quantum Leap Day transports consumers back to 1985, the backdrop for the pilot episode of the series premiere, with a drive-through experience followed by the opportunity to get gas for .91 cents a gallon – the average price of gasoline in 1985, while supplies last. The same day, “Quantum Leap” is teaming up with Fandango offering moviegoers the chance to purchase a movie ticket online for the 1985-style price of $3.55 while supplies last.

For more information on Quantum Leap Day and for full terms and conditions relating to both the Quantum Leap Drive-Through, Check-In, and Gas Station Experience and the “Quantum” Fandango Ticket Offer visit www.quantumleapday.com and official details are below.

It’s been nearly 30 years since Dr. Sam Beckett stepped into the Quantum Leap accelerator and vanished. Now, a new team, led by physicist Ben Song (Raymond Lee), has been assembled to restart the project in hope of understanding the mysteries behind the machine and the man who created it.

Everything changes, however, when Ben makes an unauthorized leap into the past, leaving the team behind to solve the mystery of why he did it. At Ben’s side throughout his leaps is Addison (Caitlin Bassett), who appears in the form of a hologram only Ben can see and hear. She’s a decorated Army veteran who brings level-headed precision to her job.

At the helm of the highly confidential operation is Herbert “Magic” Williams (Ernie Hudson), a no-nonsense career military man who has to answer to his bosses who won’t be happy once they learn about the breach of protocol. The rest of the team at headquarters includes Ian Wright (Mason Alexander Park), who runs the Artificial Intelligence unit “Ziggy,” and Jenn Chou (Nanrisa Lee), who heads up digital security for the project.

As Ben leaps from life to life, putting right what once went wrong, it becomes clear that he and the team are on a thrilling journey. However, Addison, Magic, Ian and Jenn know that if they are going to solve the mystery of Ben’s leap and bring him home, they must act fast or lose him forever.

Universal Television, a division of Universal Studio Group, will produce in association with I Have an Idea! Entertainment, Belisarius Productions and Quinn’s House Productions.