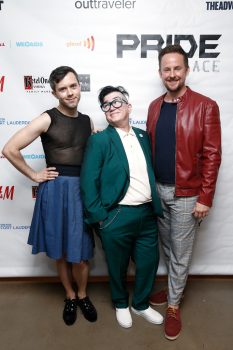 In the midst of Pride month last night’s event that DO NOT disappoint.   Leading up to the big weekend, last night’s hysterical event was hosted by Ketel One Family-Made Vodka and Pride Place for an Epic Night of Comedy at Samsung 837, featuring Lea DeLaria from Orange is The New Black, Cole Escoloa from Difficult People, and Stephen Guarino from The Big Gay Sketch Show.

Actor/singer/stand-up comedian/feminist, Lea DeLaria, rallied the crowd to raise their glasses toasting to Ketel One Family-Made Vodka’s commitment to the LGBTQ community elaborating, “We should love each other as a family.”