Los Angeles, CA (The Hollywood Times) 2/22/22 – Playing this week at the Laemmle Royal Theatre in West Los Angeles is Playground (Un Monde, Belgium, 2021), Laura Wandel’s debut feature about schoolyard bullying as seen from the perspective of a seven-year-old girl. In this terse 72-minute-long film, writer-director Laura Wandel shows us a child’s-eye-view of how a school playground becomes an obstacle course of degradation and abuse. Transposing the gritty realism of such filmmakers as Jacques Audiard and the Dardennes Brothers to the inner world of kids, Wandel crafts an empathetic and visceral portrait of the cruelty of children, and the failure of adults to protect them. The film, which premiered this year in Cannes’ Un Certain Regard section was recently acquired by Film Movement and was short-listed for the 2022 Oscars in the category of Best International Feature Film. The screening at the Laemmle Royal is paired up with a 35-minute short When We Were Bullies (USA, 2021) by documentary filmmaker Jay Rosenblatt whose film is a contender for the Short Film Award at the 2022 Oscars.

Following seven-year-old Nora (Maya Vanderbeque) and her older brother Abel (Günter Duret), we see Nora struggling to fit in before finding her place on the school yard. One day, she notices Abel being bullied by other kids, and though she rushes to protect him by warning their father, Abel forces her to remain silent, while he endures more humiliation and harassment by his peers. 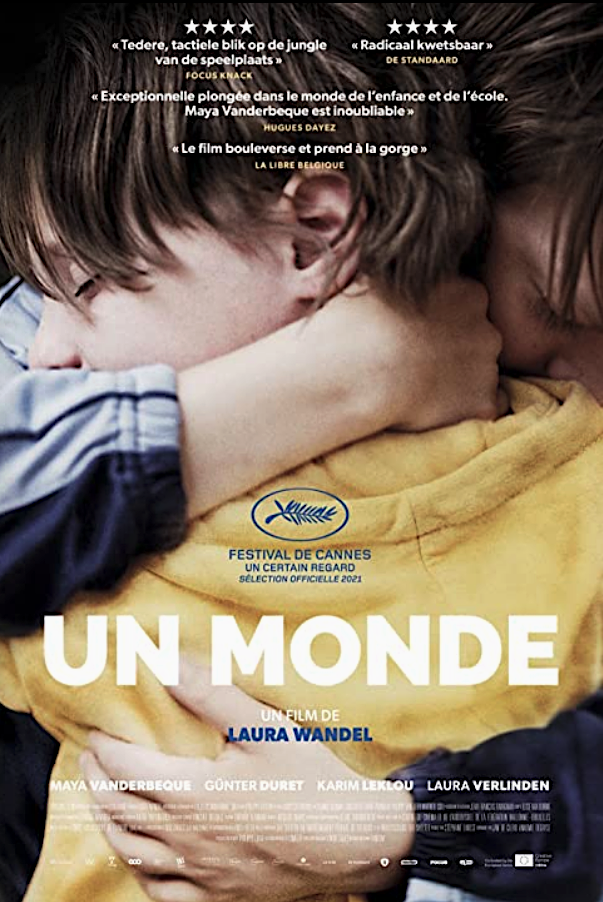 Playground is not a psychological drama, per se, but it could be. Wandel plunges headlong into the world of school-aged children and observes their dynamics with chilling precision. It generously studies its subjects – children, bullying, adults confronting the implications of the latter – and extracts haunting conclusions about the Darwinian nature of ostensibly idyllic settings.

Two youngsters, seven-year-old Nora (Maya Vanderbeque) and her older brother Abel (Günter Duret), are reluctant to leave their father (Karim Leklou) in order to enter their primary school.  Abel assures the semi-terrified Nora that everything will be alright. Dad is willing to walk Nora right up to the door but an unseen staffer’s voice tells him parents are not permitted to do that. He’s a caring dad but, once school is in session, he’s powerless to imagine, let alone buffer, the arbitrary cruelty afoot in this building and its playground.

As children rush through the gates, eager to escape the watchful gaze of their parents, Nora, the protagonist, struggles to part ways with her father (Karim Leklou). The 7-year-old’s nervousness is palpable and not easily assuaged by her dad’s reassuring remarks. She, unlike her less apprehensive older brother Abel (Gunter Duret), is a new kid.

Nora hates being there and wants to continue to hang out with her brother in the lunchroom or during recreation breaks outdoors. Interestingly, hardly any of the scenes depict classroom learning; school is primarily a sequence of mini-ordeals to be navigated and endured, be it in the lunchroom, the pool or on the playground.

Fifteen minutes of screen time representing several days elapse before we see sulky Nora smile; she has finally acquired a few girlfriends to play with and feels good about belonging. They bite their sandwiches into funny shapes and challenge the others to guess what the bread outline is meant to be. Then Nora glimpses some of the older boys viciously dunking somebody’s head in a toilet. The victim is her brother.

There’s a code of non-snitching that resembles what movies have taught us about life in prison. When does alerting the authorities improve a situation and when does it make things worse? The grown-ups are well-meaning but much of what is going on right in front of their eyes remains unseen. Some school workers are just trying to maintain order, others try to provide individual attention.

As Abel fails to defend himself – in fairness, he’s outnumbered and his enemies are truly frightening – Nora’s unconditional respect for her brother begins to fray. When another girl implies that Nora’s stay-at-home dad is a parasitic loser because he doesn’t have a “real’ job, Nora suddenly expresses doubts about her Dad’s place in the world. She’s no longer sure how to relate to the most important males in her young life.

A gut-punch of a film that is not so much a portrait of schoolyard bullying as it is a sensory immersion straight into the heart of children abusing other children physically and emotionally, Playground is a sit-up-and-take-notice blend of outstandingly natural performances enhanced by spot-on cinematic choices. Told almost entirely from the height of its young protagonists, the film plunges viewers into a world (the film’s original French title is ‘Un Monde’) of seemingly unavoidable unease, grabbing us from the first frame and rarely letting up its relentless focus on stoic suffering vs daring to upset the status quo.