Los Angeles, CA (The Hollywood Times) 9/18/18 – The works of Los Angeles artist Laura Letchinger will be featured in an exhibition entitled “CONNECTION” opening Thursday, October 4, 2018. Ten recently created large-scale paintings will be showcased, as well as mosaic sculptures and artworks by special guest and arts nonprofit, Piece by Piece. 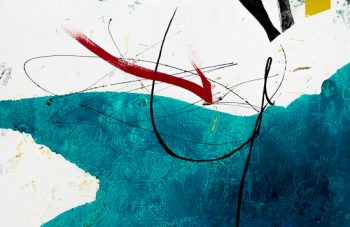 Letchinger is self-taught and her paintings hang in private residences and commercial properties across the US and internationally. Starting out with an online Etsy store and her own website, her career grew with the help of consultants and galleries. “As a kid I spent a lot of time making art and always wanted to be an artist but life took different directions. I began drawing regularly again about six years ago while waiting in school carpool lines, which led to painting,” she said.

Originally from a small rural town near Chicago, Letchinger moved to the city in 1987 after double majoring in pre-med and psychology in college. “I lived in Chicago for years, in Wicker Park before major gentrification, and soaked up graffiti, particularly when biking home from work late at night in empty streets. The art I make could be described as abstract expressionism with an urban edge,” she said. Not surprisingly, Letchinger is a big fan of Cy Twombly, Gerhard Richter and Robert Rauschenberg. Her abstract pieces are varied in style, often acrylic on canvas combined with other mediums including pastel and collage. “I like contrasts and discovering how differences come together to create something compelling,” she noted. “I think it’s an interesting way to approach life in general.” 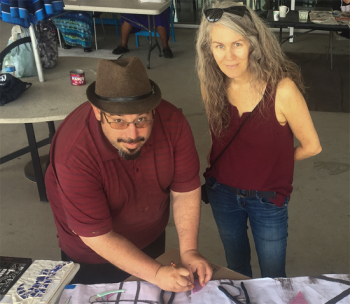 Letchinger’s works arise from being present in the moment without preconceived ideas of what to paint. She explained, “What really interests me is ongoing connection with the creative energy that informs all inspired human activity. It’s a Zen-like state — no thinking and time flying. In addition to exhibiting a variety of paintings in person, this show is also very much about extending that connection out of the studio.

Piece by Piece is an incredible, impactful community, a creative and emotional oasis in the most despairing parts of our city and I’m honored to have their fantastic artworks in the show.” Piece by Piece is a groundbreaking arts nonprofit that has been working in Skid Row and South Los Angeles for over 10 years, providing free mosaic art workshops using recycled materials to low-income and previously homeless people in order to build skills, self-confidence, earned income and an improved quality of life. 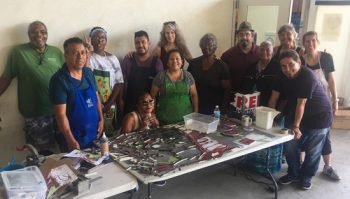 The caliber of talent and artistic quality that has emerged is a testament to the professional artists that facilitate workshops. The organization has launched its “Big Art, Big Impact” campaign, asking that property owners, developers, architects, designers, and private and public sector organizations commission projects for their new construction, existing buildings, offices and public spaces. Their large scale works include an expansive exterior mural for A Community of Friends’ Silver Star Housing for Veterans in Los Angeles, “The Spirit of Community: Mandala Series” which spans an entire side of the Legal Aid Foundation building in Los Angeles, and a series of five intricately designed circles that grace an exterior wall at a private residence in Hollywood. “More people need to see these stunning mosaics,” said Letchinger, who will also be donating 10% of her sales during the show to Piece by Piece.

“CONNECTION” Opening Reception is on Thursday, October 4, 6-9pm at Castelli Art Space, 5428 W. Washington Blvd, Los Angeles 90016. It is on view through October 7, 2018. Call (310) 204-6830 or visit www.castelliartspace.com for more information. Learn more about the artist and Piece by Piece at www.lauraletchingerart.com and www.piecebypiece.org.