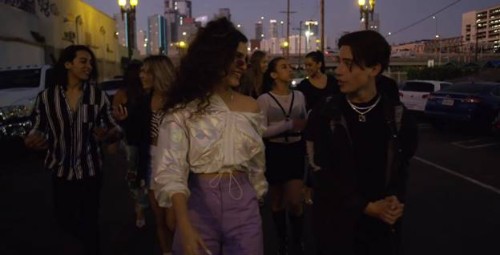 The bass driven track is a classic retelling of boy-meets-girl, but with a Gen Z twist.

Seventeen-year-old Latin-pop crossover Sarah Silva releases an exciting visual for her single “False Illusions” off her upcoming EP. The bass driven track is a classic retelling of boy-meets-girl, but with a Gen Z twist. A stereotypical player, he sends her mixed signals and presents a “false illusion” of himself. Everything that he says to her doesn’t seem to be fully true, especially when they meet in person.

“In the video, I invite a guy I’ve been talking to online, to one of my performances and right off the bat, I notice he’s a flirt with every girl he sees, so I’m like “nope” and tell him that I don’t need his False Illusions!” says Sarah.

The track mixes feisty pop lyrics with a sassy Latin vibe. Silva shows off her sassy dance moves and style in the video.

A household name in South and Central America, the bilingual singer has teamed up with producer, A-dubb (Anthony West), on an upcoming EP. Inspired by artists like Rosalía with hints of Becky G, Sarah is ready to make a splash in the U.S. with her own unique brand of Latin pop music.

Sarah’s journey truly began after taking 2nd place in the Mexican version of America Idol, La Academia Kids, at only 11 years old. The experience immersed her in six months of extensive training in singing, dancing and acting with some of the best teachers in the industry. After her participation in La Academia Kids she was casted as the namesake character in the theater play Miranda y Sus Dos Papas, where she was critically recognized for her enormous talent as a musical theater actress.

Sarah’s love of music is extensive and eclectic. She has been given the opportunity to perform a wide variety of songs from regional Mexican to R&B. In 2017, Sarah joined a social media incubator, Dosogas Team, through which she watched her socials skyrocket from tens of thousands to more than 800k in under a year. Known as the singer of the group, the incubator works to expose the young beauty to their millions of fans worldwide. She went on a world tour performing in top venues in Argentina, Paraguay, Mexico, Chile, and many others in Latin America.

She uses her music as part of her anti-bullying campaign that emphasizes the acceptance of all races, gender, sexual orientations, and other social constructs that divide teens. Sarah is currently a student at The Colburn School of the performing arts in Los Angeles, California.