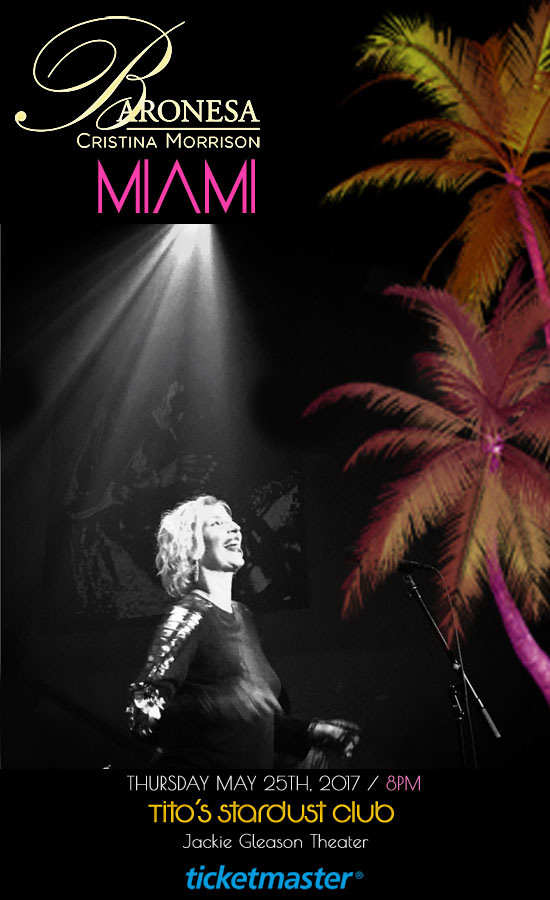 “Providing another session of magical moments, Cristina Morrison’s creative and genre-blending Baronesa showcases a superb vocal instrument in a tasteful collaboration with pianist Piatigorsky, and features cast of world-class players who interpret a set of world-styled music with grace.” – Edward Blanco, allaboutjazz

Miami, FL. (May 2, 2017). Cristina Morrison is coming back to her hometown of Miami to present her second album production titled, BARONESA as she is affectionately known as. She will be performing on Thursday, May 25th  at Tito’s Stardust Room at the Jackie Gleason Theatre in Miami Beach. BARONESA was recently nominated for Best Vocal Jazz Album and one of the tracks for Best Vocal Jazz Song at the Independent Music Awards. Cristina will also be presenting her new single release of Cole Porter’s version of “Just One of Those Things”.

She is a double nominee for the Independent Music Awards, a FINALIST at the USA Songwriting Competition, and received an Independent Theatre Artists Award (ATI) for Best Actress in New York. Her film Nobody’s Watching premieres at the Tribeca Film Festival this month and another of her films, Translucid, was shown at the Havana Film Festival in New York earlier this spring. The multi-talented Morrison has also been a TEDx Galapagos speaker. Part of the sales of her records support an educational program through the arts, Arteducarte, in the public schools in Isabela Island, Galapagos.

Cristina Morrison is a New York-based American-Ecuadorian. She has extensive touring experience, sharing stages with the likes of Arturo Sandoval and Dee Dee Bridgewater and she has garnered recognition and rave reviews for her music and acting.