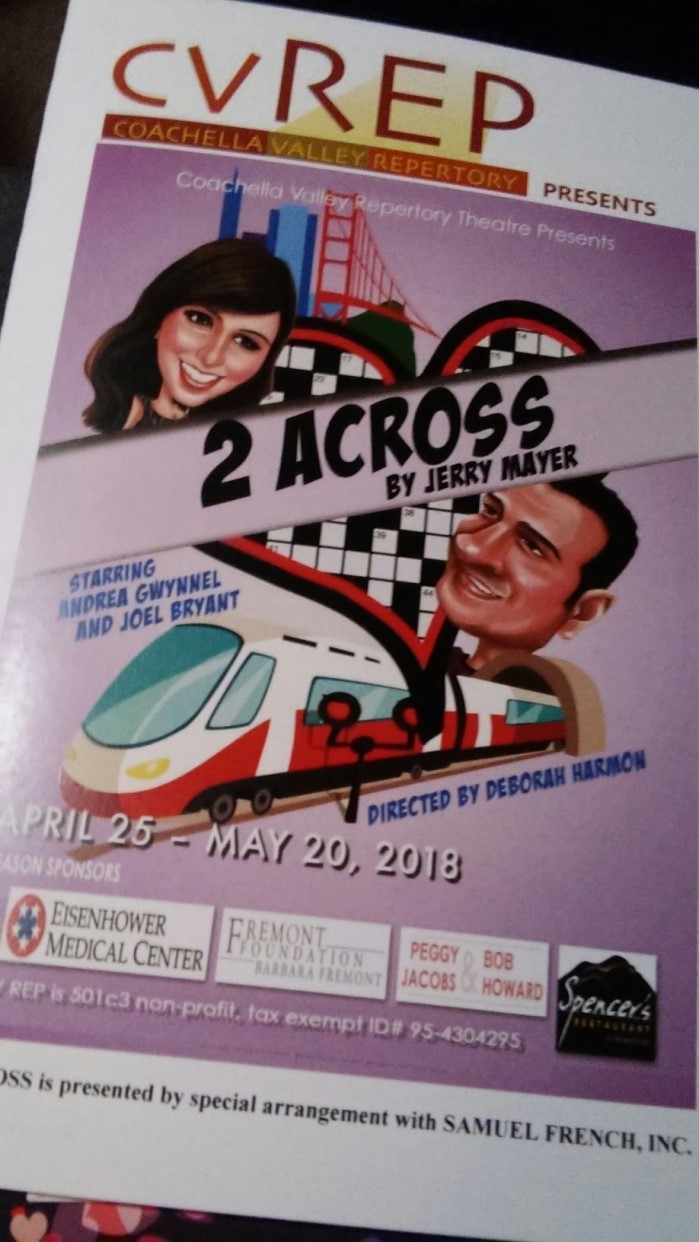 Palm Springs, CA (The Hollywood Times) May 18, 2018 – Last weekend I was in Palm Springs wanting something to do besides lay by the pool and indulge.  I wasn’t in the mood for a concert or just hanging out.  I went on line to search for entertainment and found something wonderful.  A theater with “comedy tonight” and a play titled “2 Across”, now playing at The Coachella Valley Repertory Theater, in Rancho Mirage, which  unfortunately closes on Sunday, May 20.

The play is about two people who enjoy crossword puzzles.  And it’s not boring.  In fact, you will either laugh yourself silly, feel a heartfelt fleeting moment of happiness, open some wounds from your experiences in life, or all of the above.  However, you look at it “2 Across” by Jerry Mayer  is terrific all the way around.  From direction, to actors to the amazing set to —well everything.  So, if you are in the desert and long for some great entertainment featuring two terrific actors then this production is for you. Get a ticket and grab your seat!

Deborah Harmon, who also directed this play at The Santa Monica Playhouse as a world premiere, keeps the pacing and timing of the movement of this comedy at break neck speed for an hour and 20 plus minutes—the time it takes to travel on BART (San Francisco) from the airport to its last stop at Bay Point/Antioch.   Her detail to the characters relationship during that time until they part ways takes in many nuances from standoffish to ok that’s fun to getting to know you to leave me alone again to the magic moment where we, the audience, want to see and feel what these two characters are dealing with in life and where they might be heading. I really liked her pacing and timing —never a dull moment.  Josh who has been without job for many months left his family button business and now works as a temp worker; at this point he works at the airport.  Being of the Jewish faith, he is working on the Christian holidays, so others can be off.  Janet, a psychotherapist, is on her way home from the airport after dropping off her son who is off to the military, much to her dismay.  At first Janet comes off as being prudish but we soon learn why she is rough around the edges.  We find that both these characters need to open up and share deep secrets, but are not sure how to relate to another person—especially a stranger on a train.  Slowly the layers are peeled back to reveal both their flaws and their goodness; we come too really like them both. (I wanted to get on at one of the stops!)

Andre Gwynnel as Janet is the perfect foil for Joel Bryant’s Josh or— vice versa–maybe.  Ms. Gwynnel is charming, delightful, comes off as very confident not only with her feelings but with life in general.  Mr. Bryant comes off as a fun guy—full of energy with a wonderful sweet cunning tag game that tries to lure Janet into his world of words which is easy as Janet is on top of her game when it comes to words and well…bull. Both Mr. Bryant and Ms. Gwynnel will please with their characterizations, movement and on target pacing.  With some very lovey moments the two characters come together as they begin to understand what they are about.  Sweet and charming and maybe a soft moment for a tear this date night play will please both the male and the female audience member.  After all it’s only words.

Jimmy Cuomo’s set is a character all its own.  With the inside of a commuter train with all the signs and seats and the moving doors at each stop you get the feel of the play and you are riding the distance with Josh and Janet.  Very impressive.  The sound design created by Kate Fechtig and the lighting design by Moira Wilke Whitaker played off each other in moments of pulling into a station and pulling away from the train platform gave a sense of being on and in the train.  Costumed nicely by Julie Onken with hair and makeup designed by Lynda Shapes. “2 Across” worked as this wonderful ensemble in front of and behind the scenes with the aid of Joshua Adams, Louise Ross, Doug Morris and others comes to its heartwarming ending– or not—OK maybe. You go see it and decide!

As a side note:  The CVR is in a lovely location at this writing but the group is moving soon.   I hope to have info on that in the coming weeks.  If in the desert there is a professional theatre for the residents —please support this terrific group of people bringing solid theatre to the desert.