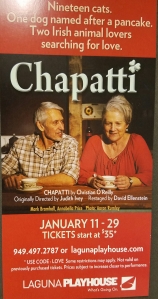 Laguna, California (The Hollywood Times) 1/18-17 –  “A need for championship, a slice of life for all, I just fell in love with this play and I know you all will too.” Ann E. Wareham, Artistic Director told the full house before the play.

Laguna Playhouse presents the Third Show in their 2016-2017 Season!  CHAPATTI, written by Christian O’Reilly, Directed by David Ellenstein, based on the Direction of Judith Ivey

What do you get when you mix an Irish tale with 19 cats, one dog named after a pancake, and two eccentric animal lovers?  Annabella Price and Mark Bramhall star in this humorous and heartwarming tale about two animal lovers in Dublin, and their unexpected spark as they re-discover the importance of human companionship.  This second-chance comedy celebrates these unforgettable characters who still believe in love.

This wonderful, charming and entertaining play starring Mark Bramhall as Dan and Annabella Price as Betty is worth the price of admission.  From the opening act of Dan narrating and speaking to his beloved dog Chapatti about life and the loss of his dear Martha, fondly remembering when Chapatti would bark and how Martha would laugh and laugh, how much he misses her, especially her laughter.  To Betty, who comes on stage and tells her story of a caregiver to Peggy, cold-hearted _itch! and all of Peggy’s cats, especially Prudence, a grey and white cat that Peggy is most fond of.

The actors do a fantastic job keeping you on the edge of your seat to see how their characters eventually meet.  It sure is a humorous story with some sadness.  The laughter of the actors was infectious to say the least, especially Betty’s laugh.  Laughter is truly the best medicine for mankind and what a world we would have, if everyone could laugh more often.  This play sure will delight all that come to see it, so you can add it to one of your favorite plays of the year.

Husbands and wives should surely go see this play and at any age.  It is a great “date night” that both of you will be talking about for years to come.  Also, high school kids should join their parents and/or grandparents to see this adorable two-person play.

The one line I truly remember from the play was “what matters is love, not being remembered.”  How so, very true.

Getting to the playhouse:  https://lagunaplayhouse.com/plan-your-visit/getting-here/

CHAPATTI will run through Sunday, January 29, 2017 at the Laguna Playhouse, 606 Laguna Canyon Road in Laguna Beach.

The box office is open Mondays – Saturdays: 12pm to 5pm (open until show time on performance days) Sundays: 11am – 4pm 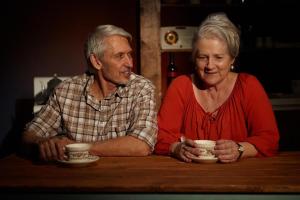 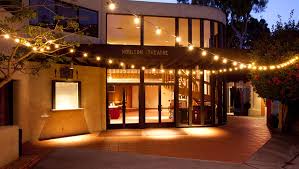 About The Laguna Playhouse

Laguna Playhouse is an historic Equity theatre located in the charming arts colony of Laguna Beach, California. Steps away from the Pacific Ocean, Laguna Playhouse is known for its year-round season of captivating comedies, dramas, musicals, stand-up comedy and family fare.

Named “Best in OC” in Live Theatre in 2016 and 2015 by the OC Register, Laguna Playhouse was founded as a community theatre in 1920, Laguna Playhouse is one of the oldest continuously operating, not-for-profit theatres on the West Coast.

A member of the League of Resident Theatres, Laguna Playhouse often features stage and screen stars who come to Laguna Beach for its upscale lifestyle, pristine beaches, fine dining, and numerous artistic offerings, all within minutes of the theatre. In addition to its theatrical offerings, Laguna Playhouse hosts a wide variety of performing artists on its Moulton Stage throughout the year. It is home to the annual Laguna Dance Festival, Laguna Beach Music Festival and Laguna Concert Band. Laguna Playhouse invites children as well as adults to attend special productions designed for young audiences. Actors of all ages share their talents through Laguna Playhouse Youth Theatre. Laguna Playhouse actors also visit local schools with educational productions, which have been honored by the American Alliance for Theatre and Education, Arts Orange County and the Orange County Department of Education.

Moulin Rouge Opens a Musical Gateway to Magic and Desire

Sam Shepard’s FOOL FOR LOVE at the Hudson Theatre