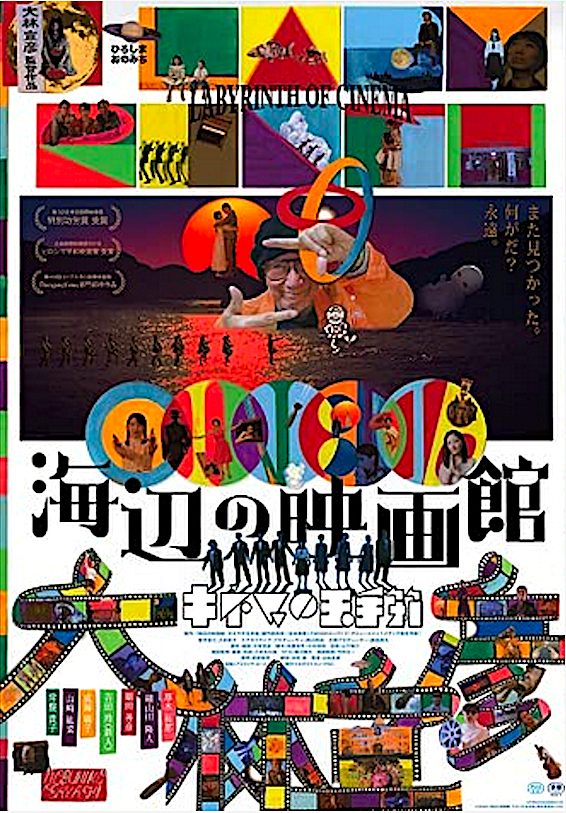 Opening October 29 at the Lumiere/Music Hall Theatre in Beverly Hills for a week’s run is a Japanese film Labyrinth of Cinema (2019), the last work of Japanese cult film-maker Nobuhiko Ôbayashi. This eye-popping film begins as a sentimental elegy to cinema-going’s golden age in Japan but takes us through the heart of Japanese darkness and its history of violence and wars.

The story centers on a group of young people who travel back in time when they are in a movie theater just before closing time. They witness deaths during the closing days of Japan’s feudal times and on the battlefront in China before they are sent to Hiroshima just before the Aug. 6, 1945, atomic bombing of the city. Labyrinth of Cinema is tremendously affecting, frequently beguiling, and rather exhausting film with a running time of 3 hours.  It is an indulgent ramble from an innovative surrealist who was always sensitive and even suspicious of his own work’s impact – as a tool for advertising, political whitewashing, and pure sentimental indoctrination.

Ôbayashi died of lung cancer a year and a half ago. A special thanks to Jordan Cronk and his itinerant Acropolis Cinema (https://www.acropoliscinema.com/) for bringing this film to the Lumiere/Music Hall Theatre (in Beverly Hills), which programs edgy and provocative films.

Setouchi Kinema, the only movie theater on the Onomichi seafront, is about to close its doors. Its last night of existence will be an all-night marathon screening of Japanese war films. When lightning strikes the theater, three young men in the audience find themselves thrown back in time into the world inside the screen. The trio are thrust into the Boshin War, the Second Sino-Japanese War, the Battle of Okinawa and then finally Hiroshima on the eve of the atomic bombing. There, they meet the traveling theater troupe “Sakura-tai”. But our anti-war anti-heroes want to alter the course of destiny to save the theatre troupe, but is it possible to reverse history?

The locus of his “Labyrinth” is the poetry of Chuya Nakahara, a fatalistic Dadaist who died just before the world war that Ôbayashi says he saw coming. “They call it modernization,” Nakahara wrote and various actors recite in “Labyrinth.” “I call it barbarization.” The metaphor Ôbayashi hammers home, in not-very-subtle-ways, is that humans love wars, but the time for that should be passing, too. The film wanders into theater and cinema history in an effort to show how Japan was indoctrinated with “self-sacrifice” and “militarism” propaganda, and how that militarism led to Japan’s ultimate destruction.

A poem Nakahara wrote about the Mukden Incident. the Japanese provocation that in essence started World War II, is quoted. “Dark clouds gather behind humanity,” he wrote. “Hardly anyone notices it. If you saw it, you’d feel as sick as I do.”

We see ways the people were “lied to,” enslaved by a system which committed atrocities with impunity once the war Japan started unfolded. Ôbayashi avoids dwelling on Japan’s crimes against “foreign” humanity. No sense rattling the country that banned films on The Rape of Nanking, POW abuse, Korean enslavement and depredations visited on China in “The Last Emperor.” Instead, we see the military raping and murdering Okinawans “to save food,” and the brainwashing it took for people to consider that a willing “sacrifice.”

Obayashi uses green-screen technology and cheap (but effective) computer graphics to dramatize folksy anecdotes about filmmakers like John Ford (played by Ôbayashi himself) and Yasujiro Ozu, which he sandwiches between brutal and/or sentimental episodes about local war crimes and counter-cultural resistance. Sometimes Obayashi quotes poetry, particularly by Chuya “Japan’s Rimbaud” Nakahara. Sometimes, a cartoon character or samurai folk hero (Musashi Miyamoto) steals a scene or two. A few characters, like the time-traveling authorial stand-in Fanta G (drummer Yakihiro Takashi), talk about movies as a beautiful, essential lie that’s first used as a balm and a distraction, and then also considered as a runway to a brighter and still unimaginable future.

Labyrinth of Cinema is indeed labyrinthine, a maze of jokes, film references, quirky back projections, bargain-basement effects and melodramatic confrontations. Not only are there cameos for John Ford and Yasujiro Ozu, but scenes echoing Kubrick and MGM musicals. There are war-movie sequences that may have been inspired by Fred Zinnemann’s From Here to Eternity or even Richard Lester’s How I Won the War. In the 19th century, there are battles against the Chinese, led by the fierce Lt Sako, played by veteran Japanese star Tadanobu Asano. In the 20th, we see fanatical Japanese soldiers ordering thousands of civilians at Okinawa to commit suicide rather than submit to the Americans.

The most poignant climax of the film is the final half hour where our trio of anti-war anti-heroes encounter a travelling theatre troupe whose casting problems mean that on August 6, 1945 they might have to play an unscheduled show in Hiroshima: the three men desperately sign up as replacement actors to keep them away from this terrible time and place. Their play is The Rickshaw Man – adapted by Hiroshi Inagaki in 1943, and remade in 1958 with screen icon Toshiro Mifune. The acting company that wound up, by the worst stroke of luck, at Hiroshima in August of 1945, a doomed troupe of artists, featuring Keiko Sonoi, killed within view of what came to be known as “The Atomic Bomb Dome.”