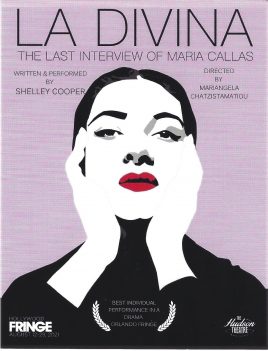 Los Angeles, CA (The Hollywood Times) 8/8/21 – Saturday evening at the Hudson Guild Theatre on Santa Monica Boulevard in Hollywood was a performance of Shelley Cooper’s one-woman show La Divina: The Last Interview of Maria Callas, written, produced and performed by Shelley Cooper. This theatre production directed by Mariangela Chatzistamatou is part of the Hollywood Fringe Festival 2021. Here on stage, the extraordinarily talented Shelley Cooper becomes Maria Callas, who is giving an interview to Mike Wallace of television’s “60 Minutes” that actually occurred on February 3, 1974. In this stage performance, actress and singer Shelley Cooper performs parts of seven opera arias which were signature pieces in Callas’ career as a prima donna on the opera stage – the most famous of which is “Vissi d’arte, vissi d’amore” from Puccini’s Tosca. 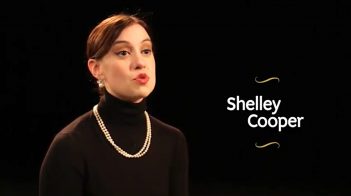 In this interview near the end of her life, Maria Callas attempts to keep the talk focused on her art, her work and her career, while the interviewer tries to deflect the discussion onto her scandalous personal life, specifically her complicated relationship with Greek shipping tycoon Aristotle Onassis. This intense affair would morph into an ongoing friendship with Onassis that would last the rest of her days, even after he married Jackie Kennedy. Maria Callas (1923-1987) was one of the most celebrated and influential opera singers of the 20th Century, so much so that she was called La Divina, “The Divine One.” This wonderful one-woman show will be performed again on Friday, August 13 at 8:30 p.m., Thursday, August 19 at 8:30 p.m. and Sunday, August 22 at 2:30 p.m. at the Hudson Guild Theatre. A special thanks to the Hudson Guild Theatre, the Hollywood Fringe Festival, and publicist Philip Sokoloff for this opportunity to see the performance. 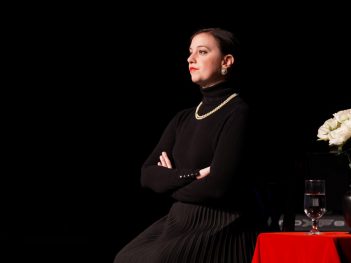 The show begins with Maria Callas’ famous line: “I am a woman and a serious artist, and I would like so to be judged.” Born in New York City to Greek immigrant parents, her mother relocated her and her sister to Athens when Maria was 13. It was there that the young prodigy began her formal musical education, which led to her phenomenal career. Callas recounts a young life with a loving father, and an overbearing mother who forced her into developing her musical talents from the age of 5, denying her the happy childhood she deserved.  Living in Athens during World War II when Greece was occupied by Axis soldiers, a very young Maria Callas used to sing opera arias to get Italian soldiers to notice her and be kind to her family. After the war, when her career became established in Italy, she would astound the world with her incredible musical gifts, becoming one of the most celebrated singers of her generation. Callas always had a high opinion of her voice and her skill at dramatic interpretation of opera roles. She had her detractors, but she was also loved. “Wherever I stay, I make the goddamn rules.” 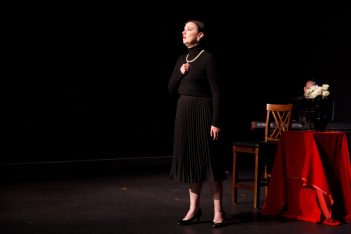 As Cooper-as-Callas, relates the story of La Divina, she sings selections from Callas’ repertoire, including arias from Puccini, Verdi, Bizet, Gluck- a selection of some of opera’s greatest hits, as it were. Cooper’s own thrilling soprano singing works associated with La Divina is perhaps the finest homage one could make to her acclaimed predecessor. It has the effect of making Cooper’s show a concert as much as a narrative. She opens with “O mio babbino caro” from Puccini’s Gianni Schicchi and, in explaining how she enticed the Italian soldiers in Athens to give her family food, she launches into “Habanera” from Bizet’s Carmen. Maria Callas believed that “to sing is an expression of your being, a being which is becoming.” 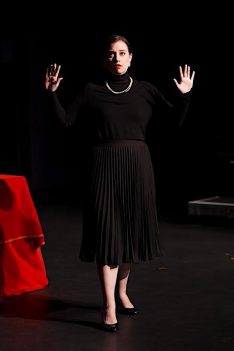 She incorporates Gluck’s “Der Hölle Rache kocht in meinem” and Rossini’s “D’amo al dolce impero” from Armida. It was her singing of Rossini that endeared her to her husband Giovanni Battista Meneghini, to whom she was married until his death in 1962. She began a love affair with the Greek shipping tycoon Aristotle Onassis which lasts many years and revealed that Onassis hated opera and saw her more as a trophy, preferring that she not perform on stage. “Women are not pals enough with men, so we must make ourselves indispensable. After all, we have the greatest weapon in our hands by just being women.” Eventually, she returned to the opera mainstage. We hear “Casta diva” from Bellini’s Norma and finally – as a testament to her belief in the need for perfection in singing – Puccini’s “Vissi d’arte, vissi d’amore” from Tosca. This was the very opera with which she launched her career at La Scala in Milan in 1953 and where she staged her comeback at the Metropolitan Opera in New York City in 1965. In closing, Maria Callas ends her interview, saying “Only when I was singing did I feel loved.”

Best Individual Performance in a Drama for La Divina, which has also been performed in Illinois, Germany, Thailand and Austria. She has sung for different companies all over the world. Her favorite roles include performing in Sweeney Todd, Into the Woods, South Pacific, The Little Mermaid, Pirates of Penzance, Rinalo, and Il barbiere di Siviglia. For a brief sampling of Shelley Cooper’s soaring soprano in La Divina, go to this trailer: