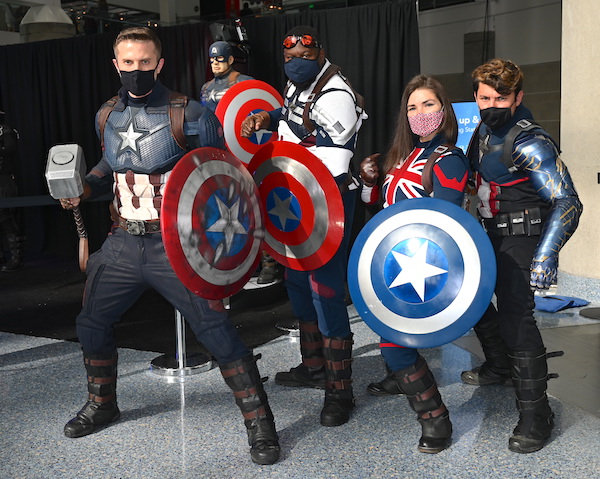 Los Angeles, CA, (The Hollywood Times) 12/6/2021–As the first Southern California convention of its kind to bring fans back since October 2019, Comic-Con is playing a leading role. The three-day event took over the Los Angeles Convention Center in Downtown L.A., December 3rd-5th.

Due to current state and local policies and guidance on covid-19, things were a little different this year.

A key aspect of any event is the atmosphere. It sets the tone for everyone who attends.
Because Saturdays are usually the event’s highlight, THT covered Comic-Con’s tenth annual event on December 4th. Guests, cosplayers, lookie-loos, and others usually swarm the courtyard entrance to the Convention Center on Figueroa in the hopes of being noticed and looking around to see which well-known comic book, movie, or television character may be caught posing for photos and attracting a crowd.

Except for children under the age of two, all attendees to the Convention Center were required to show proof of “vaccination” or a negative covid-19 virus test result before accessing the arena.

Obviously, this took some time.

The main lobby is another location where all things cosplay, to put it that way, takes place. The event picked up after a “shaky” start and resembled Comic-Con 2019. The lobby area was never as busy as it had been in the past, but everyone in attendance made the best of it.
The event was spread out over 1.2 million square feet of the Convention Center (double the space of 2019), which may have contributed to the low numbers in the lobby. The annual event drew a large crowd, although they were more evenly distributed. I believe that when we are “closer together” for events like this, we feel a sense of amazement.

For the occasion, many fans dressed up as their favorite TV, movie, comic book, anime, and video game characters and a few spoke with The Hollywood Times.

THT: What are your thoughts about this year’s event?”

Jeffery: “So far, I like it. It has more of a relaxed and chilled ambiance.”
Bo:” Yeah. It’s not as crowded.”
Jeffery: “You don’t feel rushed and you don’t feel crowded.”

THT: “How did you react when you found out Comic-Con was coming back?”
Bo: “I was pretty excited because we usually go every year to Anime Expose but we never got to San Diego Comic-Con so when I saw this, I said let’s try it.”

THT: “ How long did it take you to choose your outfits- Alice in Wonderland and the Mad Hatter?”
Bo: laughing, “Not that long.”
Jeffery: ”Yeah. I think we discussed it for a few minutes and then we were like, ‘Hey, Alice in Wonderland, that’s the way to go.”

THT: ”What was your reaction when you found out Comic-Con was coming back?”
Anthony:” We finally felt like we were going to go through with it and do it. We were like, ‘You know what, we are going to go ahead and do it.’”

THT: ”Your outfits are?”
Zulma: ”This is my outfit, BeetleJuice, from this year’s Halloween.”
Anthony: ”Mine is from Halloween two years ago.”

THT: ”What are your thoughts about Comic-Con?”
Zulma: ”It’s very overwhelming.”
Anthony: ”We did not expect so many people to show up and come out with costumes. It’s really good!”

THT: ” How long have you been an artist?”
Bruno: ”Professionally, full time, seven years.”

THT: ”How did you get started?”
Bruno: ”I was drawing since I was a little kid. I ended up going to an art college and I started freelancing…three years after I started college. This is what I’ve always wanted to do.”

THT: “How long does it take you to create one piece of art?”
Bruno: ”It really depends on what I’m trying to do or how involved it is. I do a lot of single character portraits that are between 15 and 20 hours from start to finish.”

THT: ”Is this your first time exhibiting at Comic-Con?”
Bruno: ”This particular Comic-Con, yes. I do about five or six shows every year- all around the country.”

THT: ”Do you have a favorite character that you like to draw?”
Bruno: ”I have a soft spot for Captain America because I’m also from Brooklyn.”

THT: “Great. Thank you and much success.”
Bruno: ”Thank you!”

SHOP: You can purchase an original bruno illustration & design here.

THT: ”What have you created and are offering to the public?”
Kathie: ”Well, for Comic-Con, I decided I do some hot pads that were themed for Marvel rather than just some beautiful hot pads. We’ve got Marvel, Super Mario, and Barbie represented. I’m a costume designer by trade so I thought I’d make something that might be needed at this time.”

THT: ”You said you are a costume designer by trade.”
Kathie: ”Yes, I’m a costume designer. I build all the Nintendo characters. I do the Ellen DeGeneres show every Christmas and I just did her last show. I built the big mascot costume that comes out and gives out all of the prizes. That’s what I do for a living.”

THT: “Awesome. Thank you for talking with us.”

50 Years in the Film Industry!

KATHIE is a legendary Costume Builder, Surfer, Sculptor & Illustrator. KCL Productions, having spent more than 50 years in the film industry creating some of the most iconic character MASCOTS for clients like The White House, Ellen DeGeneres, Nintendo & The Super Bowl. She even built H.R. PUFF N’ STUFF and CUJO!

Two of the hottest draws on the Main Stage were
Boy Meets World panelist and Zachary Levi (Shazam!)

So, on a scale of 1 to 10, I’d say this year’s Comic-Con in L.A. was a remarkable achievement, averaging a 7 on the success Hit-O meter.

Next year is slated to be Bigger and Better!

Will you be there?