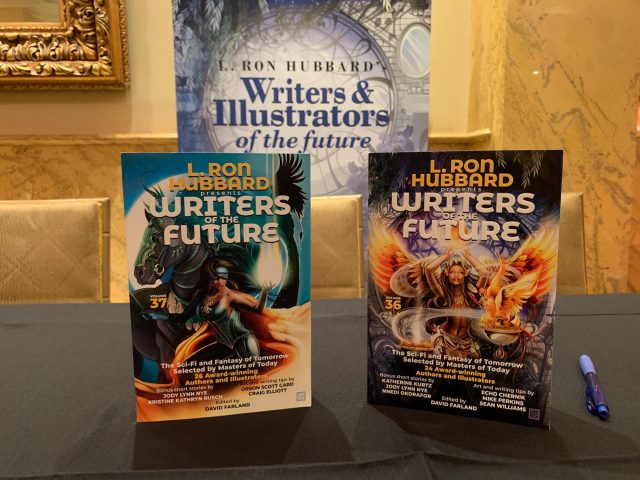 By Marc Ang and Valerie Milano

Hollywood, CA (The Hollywood Times) 10/25/21 – While L. Ron Hubbard is best known for growing Scientology into a worldwide organization, let that not overshadow his contributions to the science fiction genre. On Friday, October 22nd, at the beautiful Taglyan Complex in Hollywood, the 36th and 37th annual awards ceremony recognized 50 writers and illustrators including the “Distinguished Writer” and “Distinguished Illustrator” contests.

Following the 1982 release of his internationally acclaimed bestselling Science Fiction novel, “Battlefield Earth,” written in celebration of 50 years as a professional writer, L. Ron Hubbard created the Writers of the Future Contest (www.writersofthefuture.com) in 1983 to provide a means for aspiring writers of speculative fiction to get that much-needed break.  Due to the success of the Writing Contest, the companion Illustrators of the Future Contest was created in 1988. This spirit of mentorship and a guild was evident throughout the event.

In order to dispel any myths, this was not a closed group to Scientologists, as one may assume with the stylistic flourishes and the L. Ron Hubbard name. Instead, it really was a gathering of worldwide science fiction geeks and enthusiasts, from people involved in publishing to Hollywood liaisons to the writers and illustrators themselves and their families, procured from around the globe. 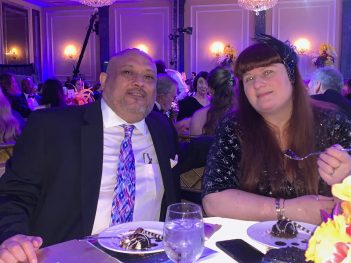 The Prestigious “Writers of the Future” Awards Winners retained full rights to their work and each were given cash awards.  The Grand Prize Winners each received an additional $5,000. The Contest flied out all winners to Los Angeles for an expense-paid, weeklong workshop given by Contest judges and culminated in the Black Tie Gala Awards event at the Taglyan.

In the 37 years of the Writers of the Future Contest, there have been 428 winners and 80 published finalists. The 428 past winners of the Writing Contest have published 1,150 novels and nearly 4,500 short stories. They have produced 33 New York Times bestsellers and their works have sold over 60 million copies. 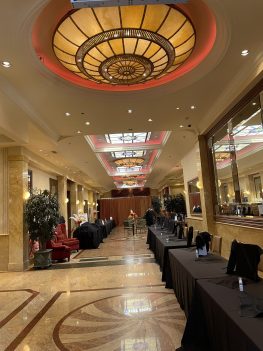 In the 32 years of the Illustrators of the Future Contest, there have been 358 winners.  The 358 past winners of the Illustrating Contest have produced over 6,000 illustrations, 360 comic books, graced 624 books and albums with their art and visually contributed to 68 television shows and 40 major movies.

The Writers of the Future Award is one of the genre’s most prestigious awards, along with Nebula and Hugo Awards, fast becoming a strong #3 as far as awards go and definitely a favorite among the enthusiasts. The Writers and Illustrators of the Future contests have produced 37 anthology volumes and awarded upwards of $1 million in cash prizes and royalties. 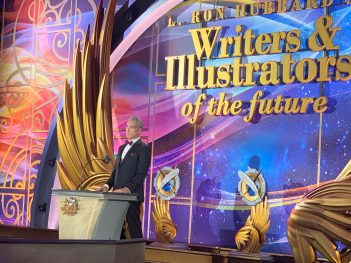 The motif for this year’s two-and-half hour awards show was a Fantastical Phoenix Voyage from classical mythology with Indian and Egyptian influences in an art nouveau style.  The book covers for both Volume and 36 and 37, designed by illustrator Echo Chernik, feature a classical Phoenix, a beautiful mythic firebird creature filled with symbolism used in historical fantasy.  The Phoenix is a large bird, usually with red and gold feathers, which is associated with fire and regenerated itself by burning up into ash and being reborn from those ashes, symbolizing hope and rebirth.

According to John Goodwin, President of Galaxy Press, and one of the organizers of the event, said, “Our contests promote the arts welcoming diversity, ethnicity, creativity and equality, with no age limits.” 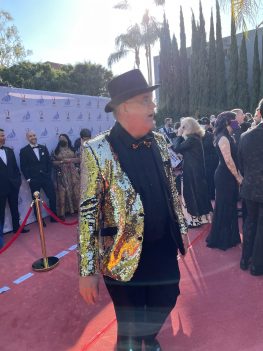 The Awards Show and Banquet was held in the Taglyan Complex’s Grand Ballroom, and it was followed by a book signing and reception. The show opened with a performance from singer/songwriter Crystal Starr, who performed a song called “We’ll Never Die”,written by composer Pauline Frechette (aka Raven Kane). Toni Weisskopf, publisher of Baen Books, and winner of the Phoenix Award, Rebel Award and the Neffy Award for Best Editor, gave a powerful Keynote speech.

The event also featured an In Memoriam segment in honor of Mike Resnick, a 2017 Lifetime Achievement Recipient and a longtime writer contest judge and Ron Lindahn, a longtime illustrator judge. On stage, certificates of recognition from the offices of California State Senator María Elena Durazo and Councilmember Mitch O’Farrell, 13th District, City of Los Angeles, were featured, recognizing the awards show and award recipients. 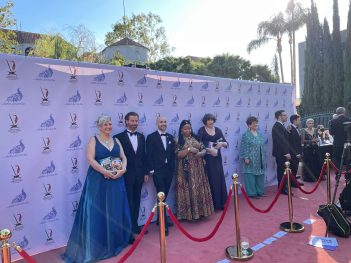 Gunhild Jacobs, Executive Director for Author Services, Inc. emceed the event, and Joni Labaqui presented The Golden Pen Award and a $5,000 Grand Prize Check to the winners of the of the Writers of the Future Contest for 2020 and 2021, and The Golden Brush Award and another $5,000 Grand Prize Check were presented to the winner of the Illustrators Contest for 2020 and 2021. 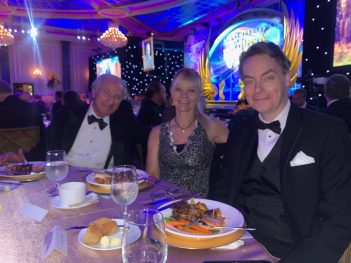 We had the privilege to sit with Jim Sullos, Cathy Wilbanks and Christopher Paul Carey from the Edgar Rice Burroughs office in Tarzana, who were good friends and business partners of John Goodwin of Galaxy Press, the night’s main organizer and one of the speakers. Preserving the legacy and work of Burroughs, his office continues to promote his brands, in and out of the niche community and in the mainstream.The city of Tarzana itself is named after Edgar Rice Burroughs’ most popular character, Tarzan of the Apes, which led to a huge 1999 movie from Disney. He bought his ranch in 1919, which is where the offices remain today, over a hundred years later. His second most popular character, John Carter, saw a box office release in 2012.  The foundation is still family owned and Jim Sullos, the current CEO, was an outside accountant before he was brought in internally and became President.

Burroughs’ story was very interesting and emblematic of the many people at the black tie event, regular everyday people. While Burroughs was a businessman at heart, he did not start writing until age 35, after embarking on this new career, resulting from his writing of bedtime stories for his 3 young kids. Previously, he was a salesman for pencil sharpeners and used his downtime in boredom to write stories. 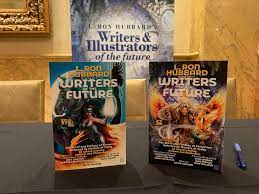 Christopher Paul Carey expressed his excitement for the awards show, “This is a smaller but very prestigious award show than say a Comic-Con but along with World Science Fiction Convention’s Hugo award or the Science Fiction Writers of America’s Nebula award, the Writers of the Future award is just as prestigious. There are a lot of big names in science fiction here, like S.M.Stirling and Tim Powers. As a writer myself with a master’s degree in “Writing Popular Fiction” from Seton Hill University, we have great respect for the writer’s workshop, which we attended in the past. With big names and big authors, you can interact with other working authors and see the business firsthand. This really is a guild and is a great chance for new writers to get exposure.”

Carey has a background integral for the future of Edgar Rice Burroughs’ legacy and the genre itself and was brought in due to his success as Senior Editor of Paizo, Inc., publisher of the bestselling Pathfinder and Starfinder roleplaying games, where he worked on the Pathfinder Tales and Planet Stories fiction imprints. 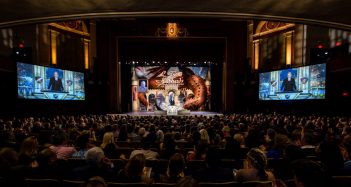 Chris was also a freelance editor for the works of both classic and contemporary science fiction and fantasy authors, including more than 60 novels, anthologies, and collections for a variety of presses. He is also the critically acclaimed author of five novels, a nonfiction collection, and numerous short stories and comic book scripts, including several authorized works set in the worlds of Edgar Rice Burroughs.

Now his job is to continue the storylines of Edgar Rice Burroughs and his universe, along with the interconnected characters. In addition, their strongest brands have a unique flavor. Tarzan and John Carter, created in the first half of the 1900’s, gave birth to the sword and planet hero and an imagined world in Mars, a fantasy setting that included retro elements. Today, this legacy lives on with the Disney tie-ins and movies. In fact, Disneyland even has a Tarzan tree house in their Anaheim and Hong Kong theme parks, demonstrating the lasting impact from a movie created last millennium. 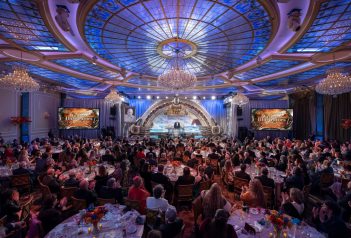 Burroughs himself was revolutionary. In 1931, he self published, which was unheard of at the time, producing many books from 1931 to 1967, when his last posthumous book was released. After his career slowed down, it was in the 1970’s when the paperback was a revolutionary format in publishing that gave Edgar Rice Burroughs a renewed boost.

The future of these books and legacy is now shifting more digital.  Now, it’s Amazon, Barnes and noble.com, direct sales and other avenues. With over 10 books released a year, and Diamond Books as the distributor and Oasis audio books, Chris’s job is to get to as wide of an audience as he can. He does this by teasing other books in the interconnected universe as a bonus chapter, and sees this as an opportunity to showcase new talent.

Chris was most excited about keynote speaker Toni Weisskopf, the keynote speaker. She had published the worlds of Edgar Rice Burroughs as the owner and publisher of Baen Books.

Joining him in that excitement was CEO of Rockville Maryland-based press, Arc Manor, Shaahid Mahmud, who actually had a licensing agreement with Edgar Rice Burroughs, but were seated together randomly. This goes to show a small tight knit community. Mahmud grew up in Pakistan and like most attendees, grew up as huge fans of the genre and are now living the dream.  Now, Mahmud’s claim to fame is despite being a small press, they secured the rights to publish Robert A Heinlein’s works, the inspiration for the satirical “Starship Troopers” franchise.

Also joining us was Dave Chesson, a speaker on self publishing and founder of the Atticus.io, an easy one-stop shop for any author who wants to self publish and create an e-book easily. Dave himself is a sci-fi fan and while his portal helps any author, it’s clear he has a love for the specific genre. Dave represented the consistent energy of the room and the “Writers of the Future” brand, in general: a tight-knit, friendly community helping each other whether through verticals in the publishing business, promoting each other’s work, paying tribute to pioneers in the genre such as L. Ron Hubbard or Edgar Rice Burroughs, or most entertainingly, connecting each other’s stories in overlapping universes. 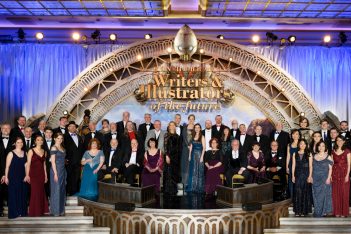